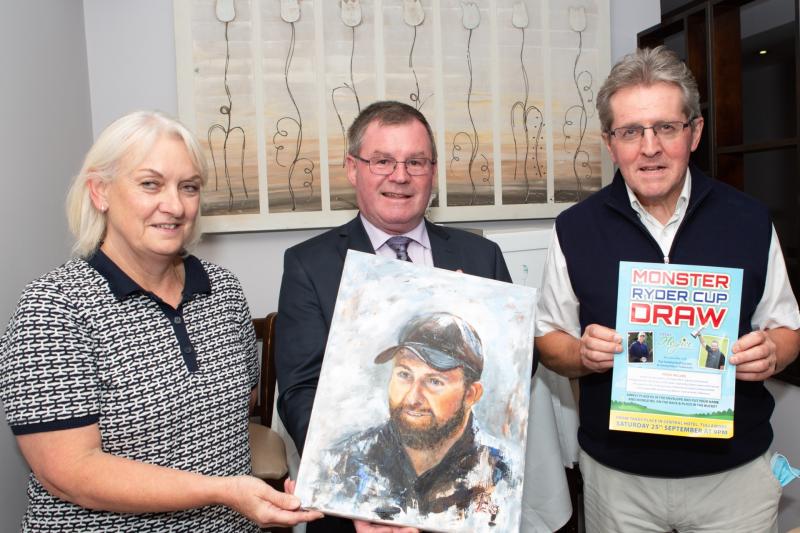 A  MONSTER Ryder Cup Draw is being organised by the Faithful Golf Society with all proceeds going to the Offaly Hospice fund.

The draw takes place on September 25 to coincide with the Ryder Cup.    Top prizes have been sponsored by both Shane Lowry and Padraig Harrington.

"Our golf society decided to organise a draw to assist the Offaly Hospice fund and we decided  that it would be ideal to organise it to coincide with the Ryder Cup seeing that Shane Lowry will be on the team and Padraig Harrington will be Captain.    There is already keen interest in the draw considering that both have donated prizes that many would love to win" outlined Sean O' Brien, Faithful Golf Society Captain.

"Shane Lowry has donated the flag from the 18th Green when he won the Open, this will be framed.    Padraig Harring has donated a framed Kartel Shirt which he wore when winning the Volvo Tournament in the US.    We also have a beautiful oil painted portrait of Shane Lowry by local artist, Ester Lambe, which will be framed.    Waterford and Tipperary Crystal, with a value of €700, has also been donated.    We will have numerous other valuable  prizes also" continued Sean O' Brien.

Official Offaly Hospice buckets will be available at various locations and people will simply place €5 in an envelope, with their name and mobile contact, which they put in the bucket.  People can buy entry tickets at the Offaly Hospice shop in Offaly St; the Parish Centre, Thomas St. ;  local Golf Clubs; Central Hotel, Main St., Tullamore; other locations will be announced next week.    You can also contact Committee members  Noel Kelly, 087 2765885; Sean O' Brien, 086 3892854; Martin O' Connor, 083 1017012; Enda Mollen, 086 3235056.