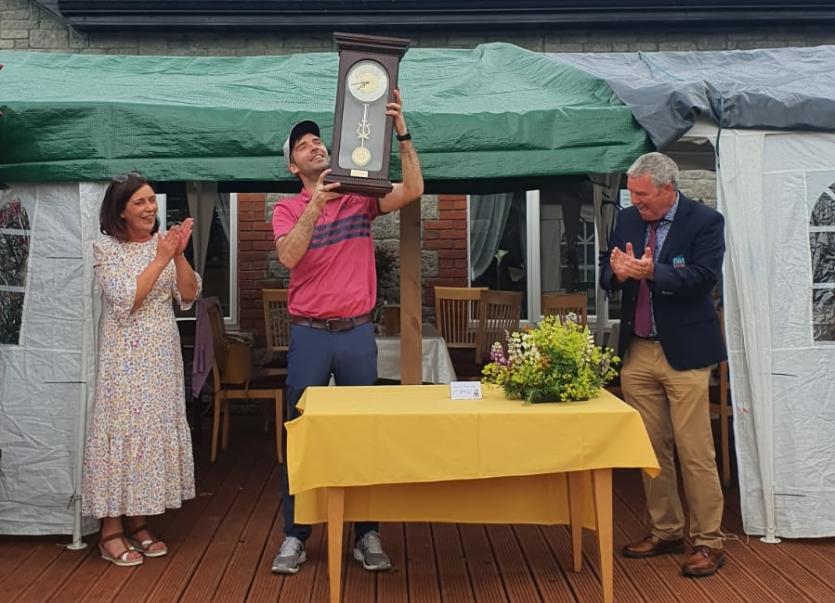 Gavin Duffy with his father Gerry and mother Helena

THERE was a great mood of celebration in Kilrush and Lusmagh last weekend when a son won his father's captain's prize at Kilrush Golf Club.

The captain of Kilrush Golf Club is a Lusmagh native, Gerry Duffy and his prize was won by his son, Gavin Duffy.

It was the first time in over a 100 years that a son won his father's captain's prize in the Clare club. Gavin Duffy had a great win out of a field of 150 golfers and his parents, Gerry and Helena were understandably thrilled.

Helena Duffy is also a native of Lusmagh. Nee Byrne, she is a sister of Ronnie Byrne, an All-Ireland minor hurling medal winner with Offaly in 1986.

Gerry Duffy, a former underage hurler with Lusmagh, worked with ESB in Shannonbridge and moved to Kilrush in 1986 after taking up employment in Moneypoint Power Station. They have three children. Gerard was born in Offaly while Orla and Gavin were born in Clare.

A first cousin of Gerry's and a fellow Lusmagh man, Offaly hurling folk hero, John Troy also competed in the captain's prize on Saturday and Sunday.

Gavin Duffy is a talented all round sports man. He went ot the USA on a soccer scholarship when 18 years of age before returning home – he is now 31 years of age and played off a handicap of 17 at the weekend.