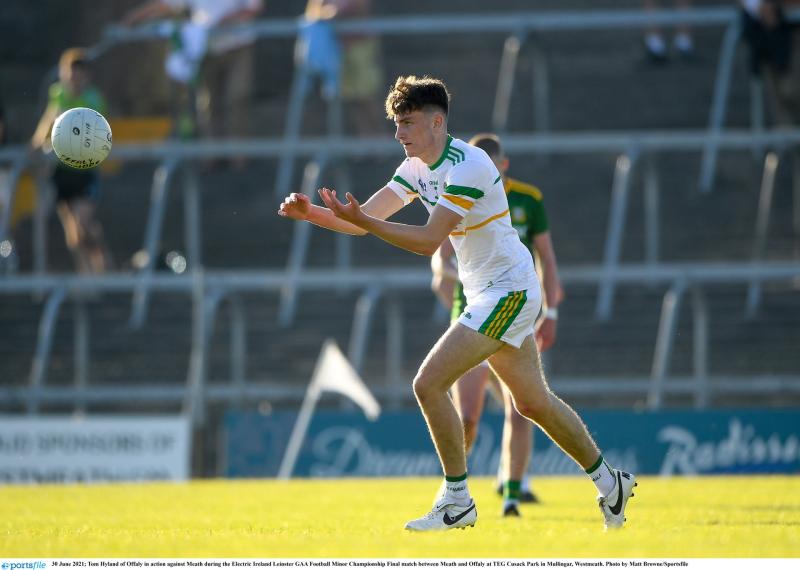 Tom Hyland, one of the 2020 minors brought into the Offaly U-20 football panel.

EIGHT of the 2020 Offaly minor football team have been drafted into the county U-20 panel ahead of this week's Leinster championship opener against Wexford.

Offaly travel to Wexford on Thursday evening for what looks to be a tricky opener. Wexford have the benefit of a game under their belts, having beaten Carlow while Offaly had a bye because of the minor footballers awaiting their 2020 decider.

John Furlong has been selected at centre half back while Keith O'Neill, Cormac Egan and Tom Hyland are named among the subs. Furlong has great work rate, does the simple thing very well and he looks set to compete at the highest level. The others have trained this week and will have the opportunity to feature if Offaly survive.

They have a lot of last year's team still available and most have been named to start. Goalkeeper Sean O'Toole, Fionn Dempsey, Aaron Brazil, Lee Pearson, Cathal Donoghue, Aaron Kellaghan, Jack Bryant, Cathal Flynn, Cormac Delaney and Mikey Cunningham are all still eligible and Offaly have a strong team. Cunningham is named among the subs while the others are all starting.

Another of last year's side, Sean Courtney is out injured and he is a big loss as he played well last year – when Offaly beat Louth and lost to Kildare.

Offaly will be favourites to win in Wexford, though it represents a banana skin. Manager Declan Kelly said: “Our preparation is not near as good as other years because of Covid but everyone is in the same boat. It is a very tricky assignment going to Wexford on a Thursday evening. Wexford have a game under their belt which will help them.”

In a normal year, he would have had full access to last year's minors but it was a different story in 2021 as they waited the 2020 final against Meath. Kelly, however, took that in his stride. “I was not concerned. They were playing football the whole year,” he said.

Offaly played challenge games against Roscommon, Leitrim and Wicklow twice, winning two and losing two. It will take a good display but they certainly look to have the talent on paper to advance. Offaly have a well balanced team named with Ed Cullen and Morgan Tynan at midfield and they will be aiming to get in quick ball to their full forward line where Jack Bryant and Aaron Kellaghan are potent players and Cormac Delaney is accurate from play and frees.