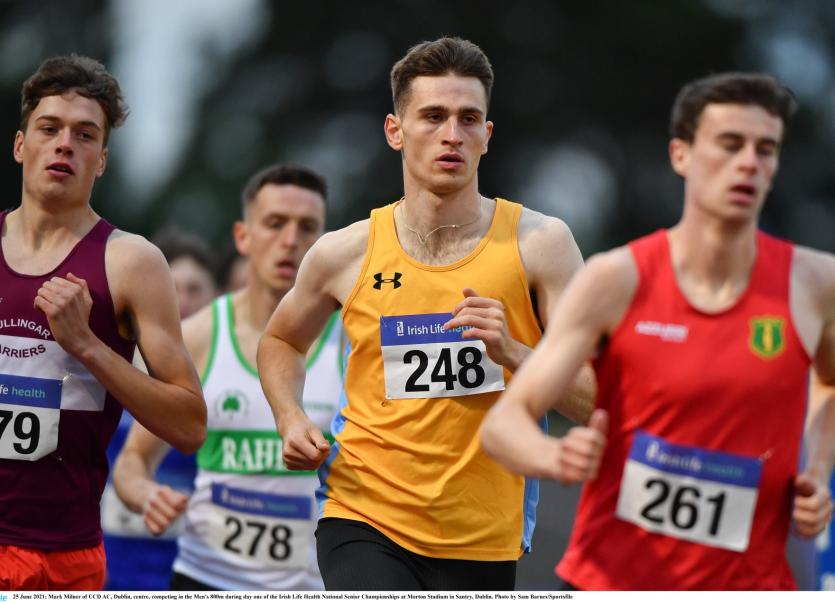 Mark Milner (248) in action at the national seniors at the weekend.,

MARK Milner has been selected for the European Athletics Championships. The Killeigh man will run in the 800 metres at the championships which take place in Tallinn, Estonia from July 8 to 11.

Milner twice achieved the qualifying time in recent weeks and while his selection was expected, he will still have been delighted to receive official confirmation at the wekend.

He first hit the qualifying mark when he ran a personal best of 1.48 at the Irish Milers track meeting in Belfast a couple of weeks ago. He ran 1.48.30 in a subsequent competition in Italy.

He ran in the National Senior Track and Field Championships in Santry at the weekend and after easing through the heats on Friday, he finished sixth in the final on Sunday. Milner worked hard to get himself into contention in the last lap but couldn't match the finishing kick in the last 200 metres as Kildare's John Fitzsimons surged to victory in 1.49.48. The Offaly athlete came home in 1.50.64.

Now racing in the colours of UCD where he is on an athletics scholarship., Milner has progressed up through the juvenile ranks at Tullamore Harriers and he is coached by Kilbeggan man Joe Ryan.

He comes from a famous running family. His father and uncles came from Walsh Island and some of them were excellent runners back in the 1970s and 1980s.

Athletics Ireland are sending a strong team to the European U-23 championships and there is another local connection through Cork man, Darragh McElhinney. McElihinney is also in UCD and has been selected for the 5,000 metres. He is a regular visitor to Tullamore and can be spotted training on the Grand Canal greenway towards Rahan during his stays here – he is going out with a promising Tullamore athlete Danielle Donegan.