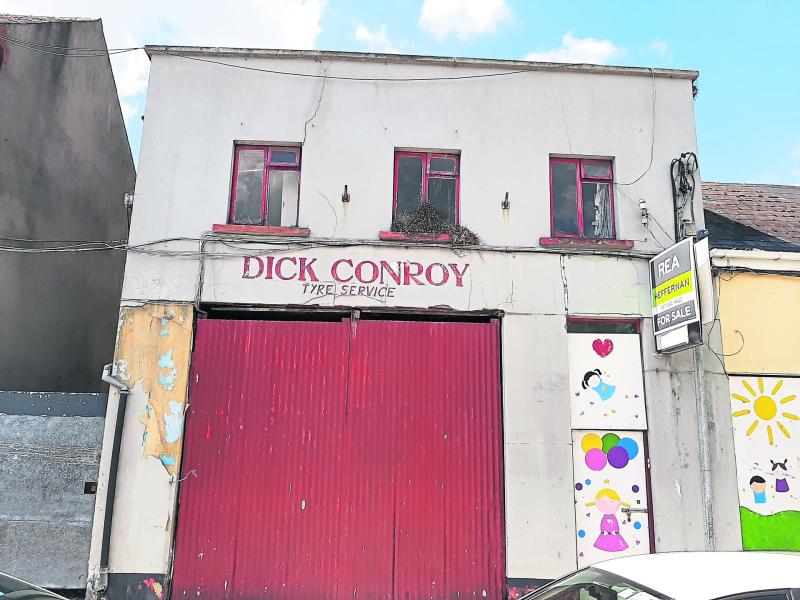 A LANDMARK commercial premises in Tullamore is falling down and should not be a protected structure, local councillors said at a recent meeting.

The Dick Conroy garage on William Street, which is now closed, is currently rated as being of regional importance in the National Inventory of Architectural Heritage (NIAH).

During a discussion on the draft Offaly county development plan, 2021-2027, councillors were told by planner Lorraine Mitchell that the council follows the recommendations of the NIAH and explained that the regional ranking is the third highest available, after international and national.

In its appraisal of Dick Conroy Tyre Service, the NIAH said it was formerly a house, built in about 1850 but altered in about 1950.

It said it provides a view that is fast disappearing throughout Ireland and added: “Small-scale urban garage and mechanics are now under threat from generic multi-national forecourts.”

Ms Mitchell said the council executive recommendation was that it should remain on the protected structures list, but the accompanying photograph should be updated because the petrol pumps had been removed.

She said a submission had been received from Gerry McGlinchey seeking its removal from the list.

Cllr Declan Harvey said the building should not be on the list. After stressing that he had no personal interest in the building, though the late Dick Conroy, who ran the garage there, was his uncle, Cllr Harvey said he could not understand how anyone could argue it should be protected.

“The place is falling down. During the stormy weather part of the chimney was falling onto the ground,” said the Fianna Fail councillor.

He said it looked “more authentic” when the pumps were present but it was now “dangerous” and “you'd go through the floor upstairs” so it should be knocked.

He was supported by Cllr Sean O'Brien, Independent, who said he knew the building well.

“Many's the tyre I bought in it,” remarked Cllr O'Brien. “We're looking at the future of the town and we can't maintain premises like this which to me don't really have any architectural value.”

Another Tullamore Independent, Cllr Ken Smollen, agreed it should be knocked down while Cllr Tony McCormack, Fianna Fail, said it would be “ridiculous” to retain its listing.

“We're trying to modernise our town and when you look at that it's an eyesore, an absolute disgrace,” said Cllr McCormack.

“It's going to lie there derelict for ever and ever unless we take it off the list.”

The removal of the building from the protected structures list will now be included in the development plan which will go out to the public for further comment later this month.