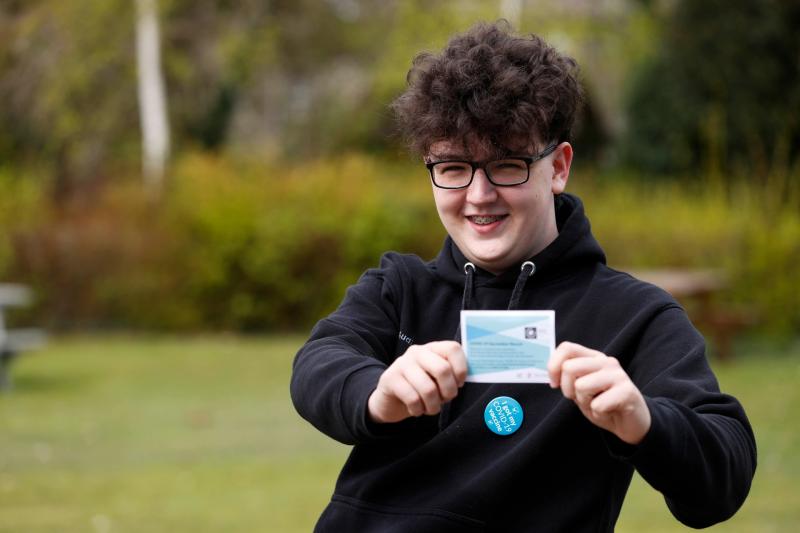 After a year of trepidation, three kidney transplant teenagers came out of cocooning on Thursday, April 8, when they attended Beaumont Hospital for an unprecedented cause for celebration.

The former patients at Temple Street Children’s Hospital are among the first in the revised Group 4 classified to be in the ‘very high-risk’ to receive their second and final ‘shot in the arm’ of the Pfizer/BioNTech vaccine, against COVID-19.  They included 16-year-old Gearoid Wrafter from Offaly.

With the changes that were brought in last month, revised group 4 was extended from 18-69 years to include 16 and 17-year-olds. With the Pfizer-BioNTech vaccine being the only one currently approved for 16 and 17-year-olds the three teens were added to the list and their vaccination will now allow them to return to school with a greater sense of confidence.

First of the three to receive her second dose of Pfizer/BioNTech at Beaumont Hospital in Dublin was Lana Devine (16) from Kells, County Meath who was accompanied by her parents, former Meath footballer Jody Devine and mother Emer and two younger brothers Liam (13) and Joe (7).

Soon afterwards two other kidney transplant recipients who were given their second dose of the vaccine and increased level of reassurance were Gearóid Wrafter (16) from Loughaun, Tullamore, Co Offaly watched on by his mother Theresa and sister Denise and Rebecca Osgood Daly (17) whose kidney donor mother Bernie Osgood had driven her daughter to her hospital appointment from Ballinlough, Co Roscommon.

This was an Easter school holiday gift like no other for Gearóid, who received his kidney transplant in 2015 and is a fifth-year student at Killina Secondary School. Rebecca, also a 5th year student at Ballyhaunis Community School in Mayo where her mother Bernie, who donated a kidney to her in 2010, is a teacher.

Speaking from outside the Irish Kidney Association’s Renal Support Centre at Beaumont Hospital, Gearoid's mother Theresa Wrafter said: "It has been an awfully worrying time for our whole family as Gearoid is more vulnerable to the dangers of COVID-19 virus than the rest of us.

"It is also a big transition and anxious time for teens transitioning from being cared for by Temple Street Hospital over to the care of Beaumont when they turn 16 and Covid-19 adds another level of anxiety to it all. Gearoid did go back to school in September, but it was a huge worry for all of us that he might become infected.

"Thankfully, as the vaccine promises 95% efficacy two weeks after the second dose his future is a lot brighter now and he can enjoy the summer ahead and we have a positive outlook as he heads into his final year at school.”

Ms Carol Moore, Chief Executive of the Irish Kidney Association, said: “We welcome the rollout of vaccinations and it offers hope to transplant recipients and dialysis patients to know that some younger members of this cohort have received their second dose of the vaccine. However, we are calling on the HSE for greater clarity in communication with patients who are still waiting their turn, to reassure them that they are on a list and give them an indication of the anticipated time frame for the vaccination of their group under their respective hospitals.”

Speaking at the national launch ahead of Organ Donor Awareness Week which took place last week, Mr Colin Mackenzie, National Honorary Chairman, Irish Kidney Association said: “Sadly COVID-19 had and continues to have a serious unwelcome impact on the transplant and dialysis community. Initial medical advice was to cocoon. Suddenly people previously leading a normal life, can no longer attend work or socialise.

"There was fear and anxiety about the risks amongst patients attending hospitals. This has also had a significant impact on people’s mental health.  A number of people in the dialysis and transplant community died with Covid-19, and we would like to express our deep sympathies to their families.”