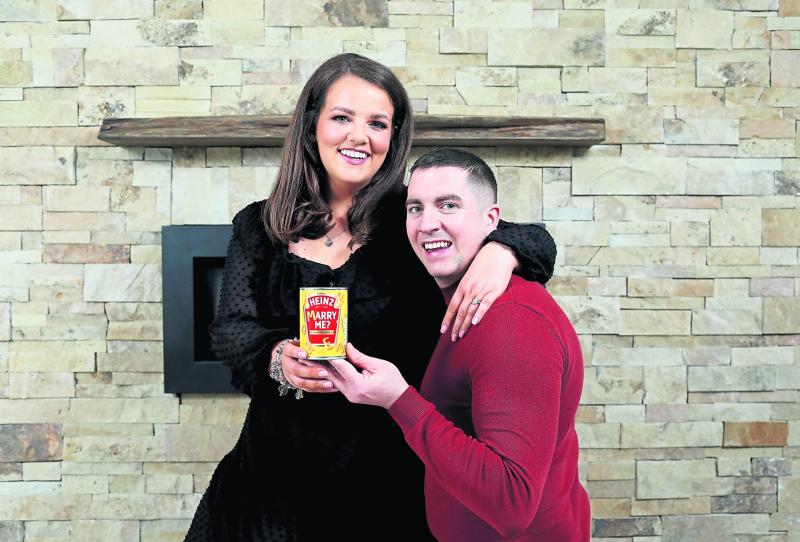 A couple from the Midlands are the inspiration behind a new Valentine’s Day promotion by Heinz Ireland.

Thanks to an idea by Longford man, Diarmuid Farrell, Heinz has launched an amorous take on one of its most iconic pasta varieties, Alphabetti, to help pasta-loving romantics propose to their partners in style this February 14.

Inspired by an amazing real-life Irish love story the special cans will only feature the pasta letters M, A, R, Y, E, in a juicy tomato sauce.

“I had been racking my brains for weeks, but the only idea that kept coming back again and again was Heinz Alphabetti,” Diarmuid explained.

“Karen really loves having it on toast for dinner, which is why it came to mind. And, I knew it would catch her completely unaware to sit down for dinner, look down at her plate to see the words ‘Marry Me’ staring back up at her. I only needed the one can to spell ‘KAREN MENTON WILL YOU MARRY ME’.”

The Mullingar native explained that the couple had recently bought their first home together when Diarmuid popped the question last February.

“It’s our pride and joy and we love spending time at home together,” she said.

“He caught me completely unaware with the proposal, I’m still surprised to this day that he did, without me copping on to anything.

“The funny thing is, I was planning on asking him eight days later on February 29. It just shows, we were both ready for this next stage of our life together.”

Emily O’Kane, Marketing Manager for Heinz Ireland explained that the company was contacted by an Alphabetti fan, Karen Menton from Longford with the unique story.

“She told us that her partner Diarmuid had recently proposed using our much-loved pasta letters to spell out ‘will you marry me’ on a piece of toast,” she explained.

“We just loved the idea and immediately got to work on creating this limited-edition ‘Marry Me’ edition’ of Heinz Alphabetti, just in time for Valentine’s Day – or should that be ValenHeinz Day?”

The new cans land in stores on February 1 and anyone wishing to share their ValenHeinz proposal can do so by using the hashtag #alphabettiproposal.