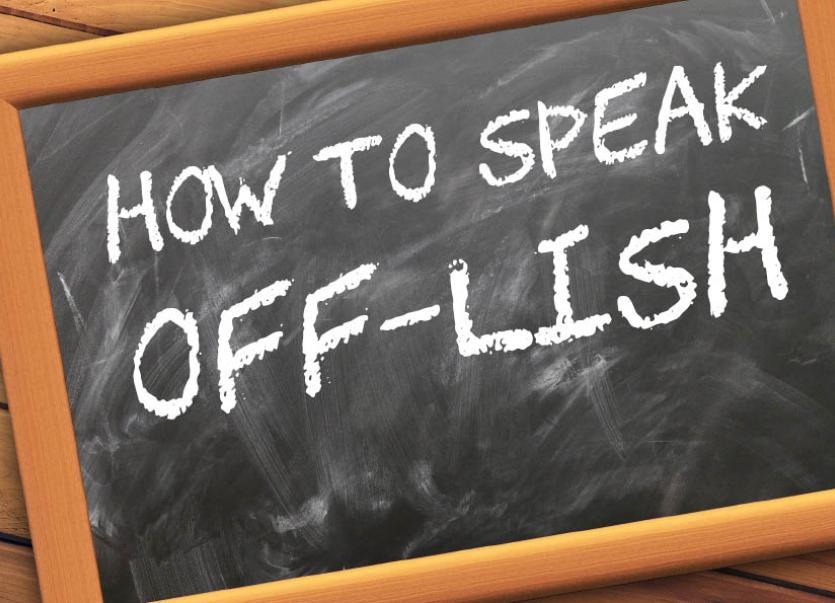 In Offaly, we have a language and way of speaking that is unique to us..... and a few surrounding counties.

Unfortunately 'Offish' (we're calling it Offlish because, let's be honest Offalyese just sounds silly) is not as easy for others in the English speaking world to pick up on.

So to make it easier, we have put together a quick simple guide to some of the keys words and phrases of our language that might make it easier for outsiders to understand..... as long as we are not speaking too fast.

Aaraa - A verbal crutch used by Offaly people at the start of a sentence when they don't know what they are going to say next. Usually followed by a pause. A common use would be when asked an opinion or to make a decision..... 'Aaraa, I suppose'

Tellamore - The county town of Offaly

Trow on - Add more to. Usually in terms of adding turf to a fire.

Shoken – Something that causes shock. Can be used as a single word or in a sentence

Tamarra – The day after today

Waher – Clear liquid that usually flows from a tap

Dobar - Another with a dual meaning. Can mean to strike an individual or can be used as an insult.

Sound – A term used to describe an individual of good character. Also a general acknowledgement that something is okay

Noh ha bodder – When something is not a problem

Creel (To creel) - This means to absolutely upend a lad with a tackle or to hit them hard in a row.

Yer wan – An expression used when not sure of a person's name. Usually used to describe a female.

Yer man - An expression used when not sure of a person's name. Usually used to describe a male.

Trow on - Add more to. Usually in terms of adding turf to a fire

Me Ma – Not to be confused with the sound of an approaching ambulance, it means 'my mammy'

Haymes – To make a particularly bad mess of something.

Strahaggy – A game plan for a match

Dem – Used to describe a specific group of individuals

Over dare - A general description of an unknown location

Savage – Describes something as being very good

Shpo hon – When someone is totally correct in their assertion

A lohha – A considerable amount of an item

Mush – General description of all males in Birr

Nohin – An absence of anything

Anihen – An absence of nothing

MORE CRAIC: 10 places we can rename to make Offaly a sun holiday destination