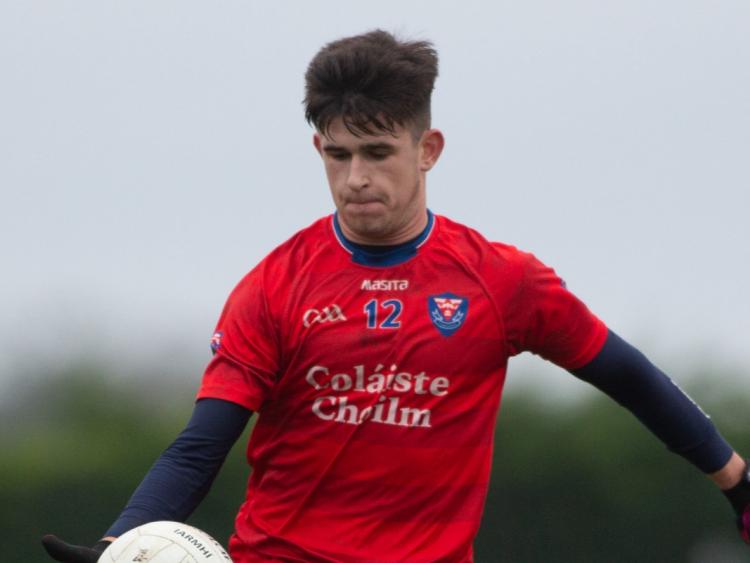 Colaiste Choilm advanced to the South Leinster Senior Football Championship ‘B’ final with a hard-earned win over Portlaoise CBS in challenging conditions at the LOETB Centre of Excellence on Tuesday afternoon.
A late change of venue saw the game switched from the original venue of The Faithful Fields to the Laois CoE, and the Colaiste Choilm men were greeted by a drizzling rain and even a few snowflakes prior to throw-in.

With the elements as such, it was as much about who could adapt the better of the two sides and the visitors coped that bit better to edge their Portlaoise counterparts in a low-scoring affair.

The Tullamore school went in 1-1 to 0-1 ahead after the opening thirty minutes of football and, despite Portlaoise battling back to get on level terms by the 40th minute, they finished the stronger to rattle off the final three points of the game to advance to the decider.

It took until the tenth minute for the opening score to arrive, and it fell Colaiste Choilm’s way. A long-ball into the Portlaoise square caused confusion and the loose ball was booted to the net by Sean Courtney to get his side off to a dream start.
Two minutes later, Colaiste Choilm pushed their lead out to four when Cormac Egan dissected the uprights with a well-taken score.

Still scoreless, Portlaoise CBS weren’t without their own chances to post to the board and by the time they registered their first score in the 20th minute - through Ben Brennan - they had already kicked five wides as they struggled to execute in the final third of the field.

The sides headed for the warmth of the dressing rooms with just three scores on the board, on a scoreline of 1-1 to 0-1, with Colaiste Choilm narrowly leading.

Portlaoise CBS dominated the fifteen minutes after the restart and quickly got back on level terms. Ben Brennan’s second of the day from a free set the ball rolling four minutes into the half and points from Darragh Carolan and Laois U-20 star Damon Larkin tied it up by the 40-minute mark.

When it boiled down to who wanted it more, Colaiste Choilm and Jack Bryant came to the fore. Ten minutes from the end he sent over a close-range free to edge them back into the lead and clipped over his second five minutes later to double their lead.

Goalscorer Sean Courtney converted a free in the final minutes and while Portlaoise would throw the kitchen sink at the Tullamore defence in search of an equalising goal, Colaiste Choilm held out for a deserved victory.