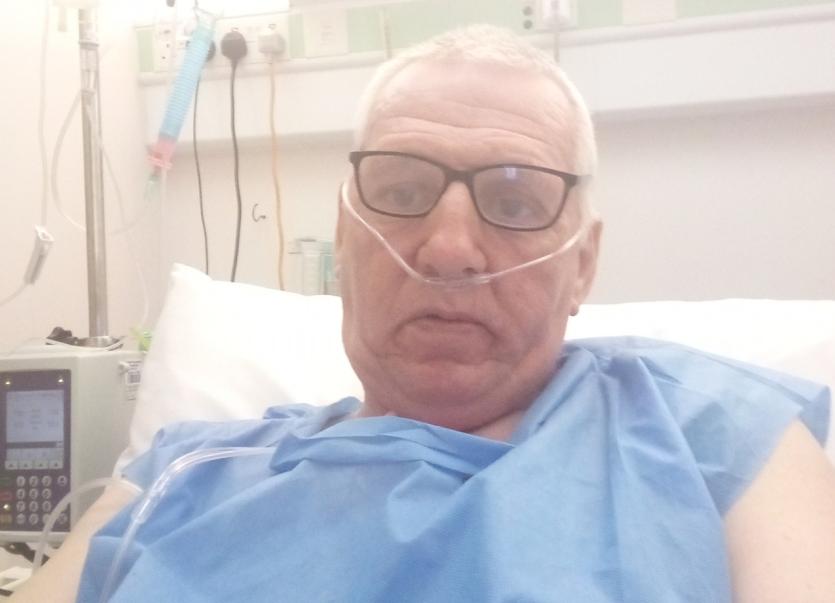 Tullamore native Rory Bracken says he currently homeless and has "nowhere to go" after being discharged from the Midland Regional Hospital in Tullamore following hip surgery.

Mr Bracken underwent surgery on January 25 after breaking his hip while helping a friend move bales of hay in Co Laois a day previous. He had been staying with a friend there as he had nowhere else to go but he says that is not a longterm solution. He was discharged from hospital on Friday, February 7.

Mr Bracken arrived back in Ireland from Kenya in October of last year after a legal battle over his visa. He spent time in a Kenyan prison having been arrested for visa discrepancies but he was later cleared in court. He is now in the middle of taking legal action against the authorities as a result and says he fears for his life if when he returns to the African country.

Rory claims he was discharged from Tullamore and put into a taxi to Carlow County Council as he collects his social welfare in Carlow. He says he was told in Tullamore Hospital that they were expecting him there but that when he arrived, they knew nothing about his situation. When the office was closing he was told he had to leave and was "lucky" a friend took him in for the weekend.

"If it wasn't for me calling a friend, I was on the street the other night with a broken hip, a suitcase, a bag and no way of moving anywhere."

"In this day and age, you wouldn't do that to a dog," Rory added. "How is it acceptable that a man can be discharged from hospital with nowhere to go?"

He then went to Laois County Council on Monday morning last, February 10, as he had been staying with a friend in Arles prior to his accident. He told the Offaly Express that he met recently re-elected TD Brian Stanley in the offices and that he tried to help. He was later told they couldn't help him in Laois and he was directed to Kilkenny County Council where he had dealt with the housing services before leaving for Africa. He attended their offices on Wednesday, February 12.

A representative in the housing section in Kilkenny arranged for him to be accommodated in a homeless shelter in Kilkenny city but upon further communication on his health and recent surgery, the hostel was deemed unsuitable.

He was accommodated in a disability-accessible room in a city hotel by the council and was also given a voucher for food. He said he was "happy to get a place to put his head down" but was worried about the next step. Rory says he was well looked after by housing staff in Kilkenny, adding, "there are good people out there. We can't say everybody is bad."

At the time of writing on Thursday evening, Rory was sitting in a hotel in Kilkenny with no contact from the county council in relation to a more permanent solution.

Rory expressed anger at his discharge from Tullamore, saying, "I'm an Irish citizen. I've given my time to mission work helping poor people in Africa and it's a sad day to be left in this situation where the Irish government can't find you a place in an emergency like this."

In documents seen by the Offaly Express, the hospital recorded the fact that Rory had presented as homeless. His discharge summary reflected this by describing discharge as "difficult" as the patient [Rory] is "reporting as homeless," something he had done at admission stage.

The summary claimed accommodation had been organised by a discharge planner, an assertion Rory claims is untrue after his experience in Carlow.

Rory further states that he was given a prescription for drugs to help with the pain associated with his recovery from surgery that he "simply can't afford." "I haven't a dime and I was contacted again to say I have a follow-up appointment in Tullamore on Thursday but I've no money, no way of getting there. What do they expect me to do?"

Rory's situation is complicated by the fact he left a HAP house a number of years ago to travel to Africa to help with the missions. He had been preaching in Kenya for a number of years before returning. His wife is from and is still living in Uganda. He says she is trying to get a visa to join him in Ireland.

"I didn't plan any of this. My plan when I came home was to get back to work and make a few bob and do what I had to do to go back to the missions. Then I had this accident and it put me homeless and it has really put me out because I've no way of paying rent," he explained.

"It's a desperate situation I didn't ask for. I'm not looking for free money or anything above anyone else. I'm just asking to be treated fairly," Rory commented.

"Should the patient require home supports on discharge the MRHT Discharge Co-ordinator links directly with the local homeless officer regarding same."

The Midland Regional Hospital Tullamore made no further comment when asked about the specifics of Rory's discharge.

UPDATE: Rory was informed on Thursday evening, February 13, that he would be placed in a rehab facility for seven weeks. He will now attend St. Luke's Hospital for a referral to that facility.