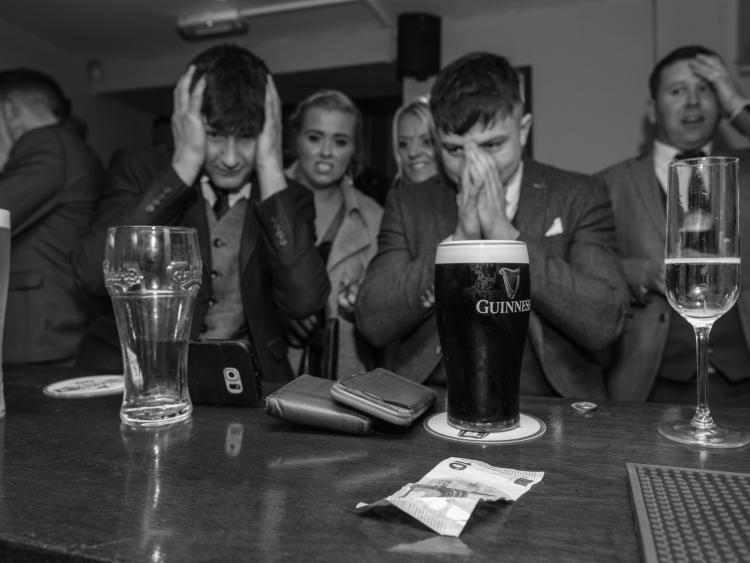 Edenderry photographer Finn Mooney made the trip to west Offaly last Saturday for a wedding but for a couple of hours in the bar, attention turned from the happy couple to the tiny screen of a smartphone propped up by a pint glass on the counter.

Local outfit Naomh Ciaran ladies were involved in the All Ireland Ladies Intermediate Club Championship Final, a game of high tension and drama right to the end.

The moment gave Finn the opportunity to capture one of the best GAA or wedding photographs of the year.

The photo above was taken in Kelly's pub in Belmont, just outside Ferbane as a group streamed the game through TG4.

Finn recounts: "The tension was palpable; the pub was busy, and the group huddled around the phone, reactions priceless and the result dramatic, winning in the last minutes of the game."

A blistering comeback for All-Ireland glory by the Naomh Ciaran ladies footballers was the crowning moment for these smartphone spectators and the huge crowd in Breffni Park in Cavan.

Trailing by five points with eight minutes remaining, they produced a stunning finish to turn the game on its head as substitute Seana Heffernan hit the key goal that launched their revival, while Roisin Egan also made a major impact off the bench in a 2-11 to 2-9 win.

We reckon this photograph was taken amidst the fightback after Naomh Ciaran had seen a goal chance go begging.