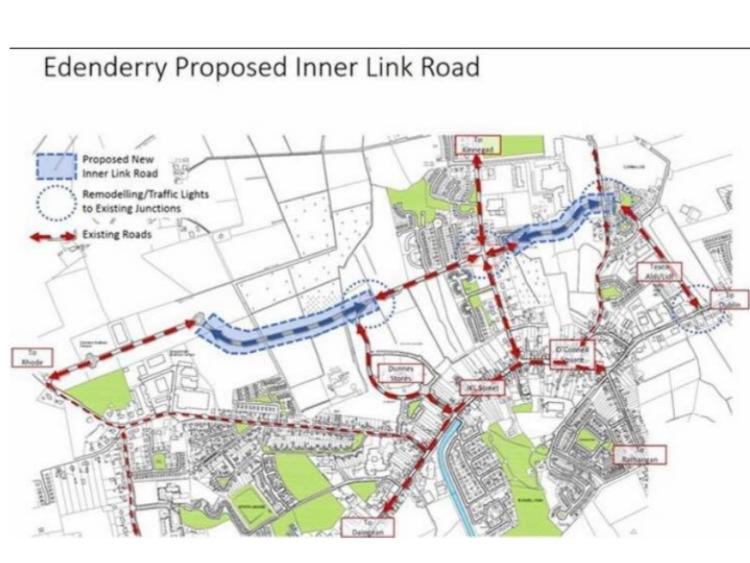 Offaly County Council has given the green light to a proposal that seeks to construct an inner relief road connecting the Dublin Road from the roundabout at Tesco, through a number of housing estates in Clonmullen, to the Carrick Road at Clonmeen Rise, and further out to Monasteroris in Edenderry.

The route effectively bypasses the town from the Dublin side to the Tullamore side and the Part 8 planning process received support at Monday's meeting of Offaly County Council with the exception of Cllr Noel Cribbin who refused to back it.

The road, which is estimated to cost €4.5 million, will affect residents in Clonmullen who have previously voiced opposition to the road which will pass through a number of built-up areas. They, along with local councillor Noel Cribbin, have suggested an alternative route, starting closer to the Boyne Bridge on the Dublin road, connecting similarly to the Carrick Road in the town, a route the council says lies on a flood plain and is unlikely to get approval from the Department of Transport until inner options are exhausted.

The proposal was vocally supported by four Edenderry based councillors on Offaly County Council. An exception was Noel Cribbin who said he "could not stand over" the proposal.

Area Engineer with the council, Mark Mahon, reiterated on Monday that the inner relief road was being sought in response to Edenderry's growing population and the knock-on increase in traffic locally. He said that studies show the number of cars travelling on the Dublin road in the town has grown from 9,500 in 2015 to 12,500 in 2017.

He also noted the high percentage of people from the town who commute to Dublin for work, pointing out that, at present, all of those people must travel through the centre of town and in and out the Dublin road in the mornings and evenings.

He suggested the new inner relief road would alleviate the current congestion and allow local traffic to enter and leave the town at different points, dispersing the traffic volume accordingly. He also noted the route would open up currently unused zoned lands for commercial and housing developments and serve the new Oaklands Community College building set to be built in the area near Dunnes Stores.

Disagreeing with the road, Cllr Noel Cribbin said that of 153 submissions received by the public on this project, "not one received a positive response."

"This plan started out in 2001 when that area around Clonmullen was a greenfield site," he said.

Noting the now many houses in the area and the safety issues raised, Cllr Cribbin added: "The ship has sailed on this."

Refuting suggestions that the route would alleviate Edenderry traffic, he said: "The queue of traffic out the Dublin road will be four miles long if lights are used at Tesco for this route."

"I don't think it will work; an outer relief road at Lawton and Foley near the Boyne Bridge is the solution, not this."

He also took issue with assertions that Edenderry had not changed markedly in traffic terms from 2008 when the latest transportation study analysing traffic volumes was carried out.

He said a number of new schools and growing school numbers had added to traffic, as well as the capacity and staff of Rosderra Meats quadrupling since that time with more trucks and workers travelling in the area.

"To tell me Edenderry hasn't changed since then defies logic," the Fine Gael councillor said.

Cllrs John Foley, Eddie Fitzpatrick, Liam Quinn and Noel Bourke all supported the proposal. Cllr Alan Davy who only recently took the seat of Martin O'Reilly, did not speak on the matter in the chamber.

Cllr Foley said: "This is vital for Edenderry and provides great opportunities for schools, businesses and for future housing."

"If we let this go by, the gate would be closed on Edenderry for good," he added.

Cllr Noel Bourke said his only regret was that this road had not happened many years ago, saying he had faith that the safety issues legitimately raised by residents in Clonmullen and Clonmeen Rise would be addressed in the final development.

Both Cllrs Liam Quinn and Eddie Fitzpatrick noted the positves in traffic alleviation and future development in the town that the road would provide.

Engineer Mark Mahon responded to questioning by saying the outer relief road option continued to be a long-term ambition in various plans but insisted that option would not be considered for funding until all inner options like this one were exhausted.