Improving Rhode cruise into semi-finals as Shamrocks come up short 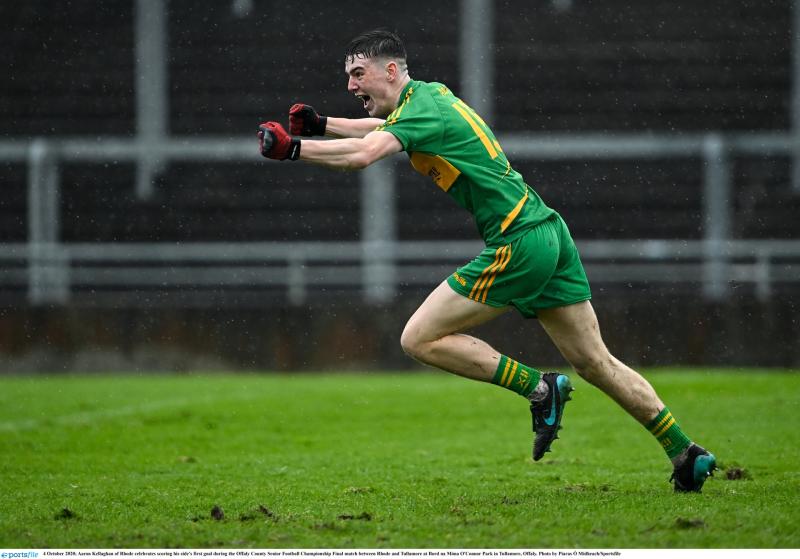 Aaron Kellaghan had a great first half for Rhode.

RHODE cruised into the semi-finals of the Offaly Senior Football Championship as they brushed Shamrocks aside with a very competent, very professional performance in O'Connor Park on Sunday afternoon.

Rhode were ruthlessly efficient in the way they controlled this quarter-final, holding Shamrocks at arm's length and they never looked in danger of losing. Shamrocks tried hard but were nearly always second best and it was a fairly tame end to a year that never truly ignited for them.

On paper, Rhode look to be vulnerable. They are without the injured Eoin Rigney and Jake Kavanagh for the season while Brian Darby was suspended for this and another defender Gareth McNamee was also out. With so many backs out, there looked to be a window of opportunity there for Shamrocks but they never threatened to grasp it.

Shamrocks had a couple of chances that might have made it more interesting but Rhode probably could have upped the ante any time pressure came on. They weren't at their brilliant best in the group stages, losing to Durrow in the first round and finding themselves in uncomfortable, unfamiliar territory of being under pressure early in the season. They have kept winning and this was a very definite step in the right direction for them.

There will be much stiffer tests ahead but Rhode now have a 50/50 chance of a renewal with Durrow in the semi-finals and this performance, and the manner in which they went about their business augurs well for their prospects. They remain the team to beat, and let no one be under any illusions about that.

Rhode were superb in the first half here. They moved the ball at pace, showed great movement and awareness and took some exceptional scores – Niall McNamee, Aaron Kellaghan, Darren Garry, Ruari McNamee, Pauric Sullivan, Anton Sullivan and Paul McPadden all kicked fine points for them.

The spread of Rhode scorers was very good and a frantic Shamrocks defence just couldn't get to grips with them. Rhode had the wind on their backs in the first half and they really made it count as they led by 0-13 to 2-2 at half time. The game would have been over as a contest only for a Shamrocks goal at the start and end of the half. The first came in the third minute from David O'Toole-Greene after he was put in by Jack Bryant and the second came from Alan Heffernan, two minutes into injury time when he grabbed the ball from a ruck and ran through for a goal.

O'Toole-Greene's goal had given Shamrocks a 1-1 to 0-1 lead but Rhode then went on the rampage, scoring five points without reply and the losers were gasping for air.

A five point half time deficit gave Shamrocks an outside chance with the wind to come but in reality, Rhode were always likely to have enough in the tank. Shamrocks tried hard but didn't get close enough to truly trouble them. Nigel Dunne had hit the post with two first half frees and they could have done with them.

Rhode led by 0-16 to 2-4 after 44 minutes and were very much in cruise control. Points from Jack Bryant and Nigel Dunne (free) brought the gap down to four but Shamrocks couldn't get it back to a score. Instead, Rhode ended the game as a contest with a magnificent Niall McNamee point and a punched goal from Shane Sullivan in the 56th minute after he was set up by McNamee. Shamrocks got the final two points from Dara Daly and Jack Bryant but by that stage, their game was well and truly up.

Shamrocks gave it their best shot on the day but their performances this year have been somewhat disappointing and they have plenty of work to do to become a real force at this level – they have held their own at senior level and that is important for them but they will be setting the bar higher. Some of their football here was clumsy, their error count and unforced mistakes was way too high and you really couldn't win a championship quarter-final with some of them,

Niall McNamee (Rhode): Niall McNamee remains an absolute force of nature. He is playing some of the best football of his long career and he was brilliant here, scoring seven points, four from play, You had to feel sorry for Shanmrocks full back Kieran Dolan. He did almost everything by the book, sticking tight to his opponent and doing his utmost to block and tackle. On this form, however, McNamee can't be marked in Offaly and he had a fantastic game, spraying around some great passes in addition to his scores.

The goal Alan Heffernan got two minutes into first half injury time saved this game from being a whitewash. It left Shamrocks trailing by 0-13 to 2-2 at half time and it would have been over as a contest only for it.

Fergal Smyth had a very good game. He was always in control and there was very little contentious here.

Getting ambulances to O'Connor Park is proving to be a big issue. Even though the ground is located a stone's throw from Tullamore Hospital, one had to come from Portlaoise for Paul McPadden when he got injured in the first half. Another one was called for a Shamrocks supporter who took ill during the match and was cancelled when his family decided to bring him to the hospital. One had to come to Birr in another game here and it is creating unnecessary delays for hurt players and their worried families.

The O'Connor Park pitch was heavy enough but held up as well as could be expected after some heavy rain earlier in the day.

Rhode play Durrow or Tullamore in the semi-final. Shamrocks' year is over.