Wary Rhode and Edenderry favourites to march on in Offaly SFC 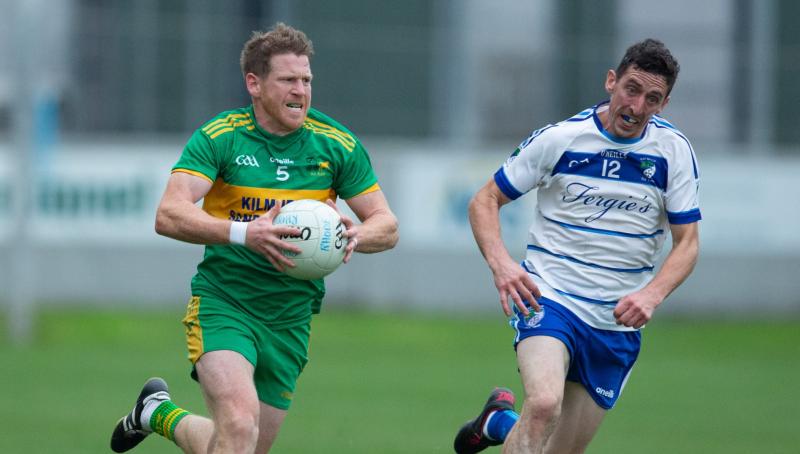 Brian Darby is suspended for Rhode on Sunday while Cappincur and Kevin Minnock have a relegation play off on Saturday.

UNUSUALLY, the mantle of favourites will sit somewhat uneasily on Rhode's head as they prepare for Sunday's Offaly Senior Football Championship quarter-final against Shamrocks while the other quarter-final is a real 50/50 one between Ferbane and Edenderry.

The other big senior football action this weekend is the relegation play off between Bracknagh and Cappincur, with both clubs desperate to avoid a return to senior “B” football.

On an initial examination, Edenderry should be favourites for their big quarter-final against Ferbane but they certainly won't be approaching the game in that light.

Ferbane are without two of their marquee forwards. Cian Johnson, a serious scoring machine, has played no part in the championship to date while their prospects have nose dived with a cruciate injury to Offaly hurling star Oisin Kelly. Another forward Paddy Clancy got sent off in the defeat by Rhode and if he is suspended, it further damages Ferbane.

That certainly loads the dice in Edenderry's favour but Ferbane will still fancy their chances of progressing. It pits two sides with genuine title aspirations but both enter this game with question marks about their form.

Ferbane have beaten Cappincur, draw with Durrow in a game they really should have lost and lost to Rhode while Edenderry have beaten Shamrocks and drawn with Bracknagh and Tullamore. Neither is the form of champions but no one will be surprised if either ends up on top of the tree in a few weeks time.

Edenderry have arguably the greater scope for improvement as they have only shown flashes of their best form. They certainly have the players to play much better but whether they can switch it on now remains to be seen. It should be a very close, top-quality game.

Rhode find themselves in two very unusual situations for their quarter-final meeting with Shamrocks. Firstly, they would have expected to have won this group and qualified straight for the semi-finals at the start of the season and secondly, there is enough questions about their form to give Shamrocks an outside chance here.

While they won't be saying this in Rhode, they will be happier to be facing Shamrocks' than Edenderry in the quarter-final. Shamrocks have been honest and have played spells of very good football but they have not been truly convincing in the championship and Rhode are favourites.

Rhode, however, are fragile. Brian Darby got a red card in their win over Ferbane and his appeal against this failed on Monday night, Eoin Rigney is out for the season with a possible cruciate injury and last year's full-back Jake Kavanagh is also out for the season with a ruptured achilles. Fortunately for them, Niall Darby is fit again and will play here but they are still down three of their best defenders. The champions simply don't have the depth in strength to cope with absentees of this calibre and if they take on Shamrocks without this trio, they will have their work cut out.

Rhode, however, do have Niall McNamee and he scored a sensational 3-8, 3-6 from play against Ferbane. Shamrocks will have to curb his influence or at least limit the damage but that is easier said than done.

It is possible but doubtful if Shamrocks can be the ones to end Rhode's reign. Shamrocks have drawn with Tullamore, lost to Edenderry and beaten Bracknagh. It is not bad form, yet their performances have not inspired true confidence. Rhode are in the same boat, losing to Durrow and beating Cappincur and Ferbane but they are the champions, they know how to win and they have what it takes.

This game will tell a lot more about Rhode. While there are all those question marks about them, they remain the title favourites, the team to beat. That may be based on past rather than current form but Rhode's pedigree and ability to perform when the pressure comes on is a very real thing. Shamrocks do have a chance here but they need a lot of things to go very right for them.

In its own way, the meeting of Bracknagh and Cappincur is every bit as interesting as the quarter-finals. Both have a burning desire to remain in the top flight and both will be aware that it could possibly take them a while to bounce back if they step down, particularly Cappincur.

Both sides are in the relegation playoff on merit, though Bracknagh were a bit better in the group and drew with Edenderry before getting walloped by an on-fire Tullamore and losing to Shamrocks in a winner takes all tussle.

They should be favourites but they will be without their star player Peter Cunningham who has had to go into isolation ahead of an Army tour to Syria. Cappincur's key man, Eoin Carroll is taking a year out to go to Australia but will be around for this one. He has been struggling with injuries in the past couple of years and it will take a big display from him to keep Cappincur up.

Cappincur have lost their three games to date and have been the worse side in the championship to date. However, the absence of Cunningham levels the playing field here and they have a great chance of survival.