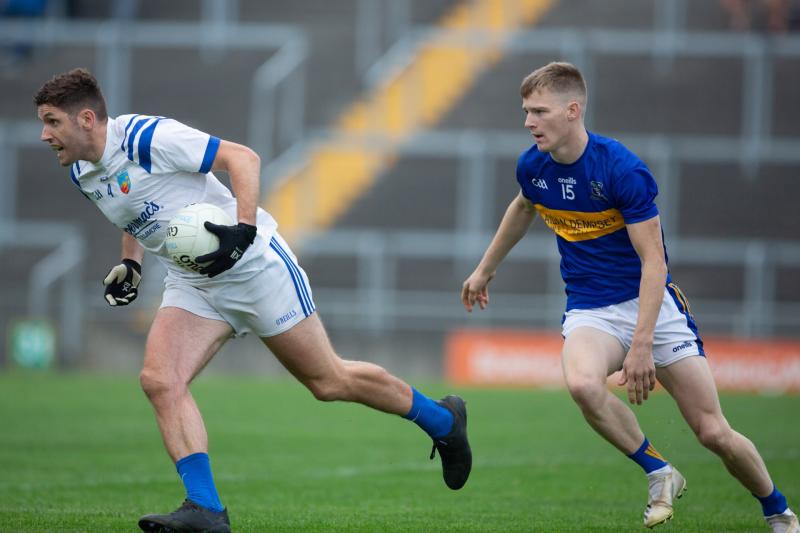 Paul McConway gets away from Mikey Cunningham in Tullamore's win over Bracknagh.

THERE were two standout talking points when the second round of the Tullamore Court Hotel Senior Football Championship took place last week – the excellence of Tullamore in their demolition of Bracknagh and the continued progress demonstrated by last year's senior “B” champions, Durrow as they followed up a first round shock win over champions Rhode with a draw against Ferbane.

There are no defininitive championship favourites yet. Tullamore produced the best performance of the year in their win over Bracknagh on Saturday but the losers were very much off the boil while Rhode got their campaign back on track with a comfortable, routine win over Cappincur but they have not found top gear yet and do look somewhat vulnerable.

There is a lot of football to be played yet and it is in the knockout stages that the real business will begin. Edenderry and Ferbane are also contenders but there is question marks surrounding both while Durrow's form commands the height of respect, even though they were on no one's short list of contenders at the start of the campaign. Shamrocks are competitive but haven't convinced as a side who can win the Dowling Cup this year while Bracknagh and Cappincur are rank outsiders and look set for the relegation play off – Cappincur are already in the play off to avoid the drop down.

With the games coming thick and fast and no disruptions because of county teams, it is shaping up to be a very good championship. The steady schedule of games gives clubs clarity and an opportunity to build momentum. The final round of group fixtures will tell a lot more about the prospects of teams.

In group 1, Durrow had an excellent 1-13 each draw with Ferbane last Saturday and it is a sign of the way they have improved this year that they were disappointed not to win. Sub Ronan McGuire got the final equaliser for Ferbane and Durrow had played well enough in the second half to win. As it is, they are guaranteed a quarter-final place and they would never have expected to have that in the bag after two rounds. They have a very good young team and they also have subs capable of making a difference.

Rhode recovered from their first round defeat with an easy 1-16 to 0-8 win over Cappincur. Rhode didn't hit top form and missed too many chances. There are question marks about their form and Eoin Rigney went off early with an injury that could have a big impact if it proves to be anything other than short term. They had Niall McNamee back for this and he top scored with nine points. Rhode look vulnerable but they won't be worried about that as they will improve and they remain the team to beat.

The qualifiers from this group are sorted as Ferbane, Durrow and Rhode are all through. Ferbane and Durrow have three points with Ferbane having a better scoring difference - +10 compared to +3. Rhode have two points while Cappincur have none – even if Rhode and Cappincur end up on two points, Rhode will still go through under the head to head rule.

In the final round, Durrow play Cappincur and Ferbane play Rhode. This actually opens up the possibility of Durrow topping the group and going into the semi-finals. Durrow will be favourites to beat Cappincur and if Rhode beat or draw with Ferbane, then Durrow will be top.

There is more to play for in group 2, where Tullamore and Edenderry are top with three points – Tullamore's scoring difference is +13 points, Edenderry's +2. Shamrocks and Bracknagh have one point each with Shamrocks' scoring difference -2, Bracknagh's -15. Tullamore and Edenderry are assured qualification and the winner of their clash in the last round will go into the semi-finals. Shamrocks and Bracknagh in the last round is a straight knockout game with the winner going into the quarter-finals and the loser into the relegation play off. A draw will be enough for Shamrocks.

Tullamore were brilliant on Saturday as they beat Bracknagh by 3-14 to 0-8. Starting most of their outstanding young emerging talent, they blitzed Bracknagh and could have won by a lot more – the scale of their win was a surprise as Bracknagh had drawn with Edenderry in the first round and Tullamore had shared the spoils with Shamrocks.

In the other group 2 game, Shamrocks gave Edenderry plenty of trouble in the first half but the north Offaly side were the better side in the second half and deserved to win by 0-12 to 0-10. Edenderry are capable of playing better and have some outstanding talent – they are title contenders.

Rhode get back on track with routine win

Rhode get back on track with routine win