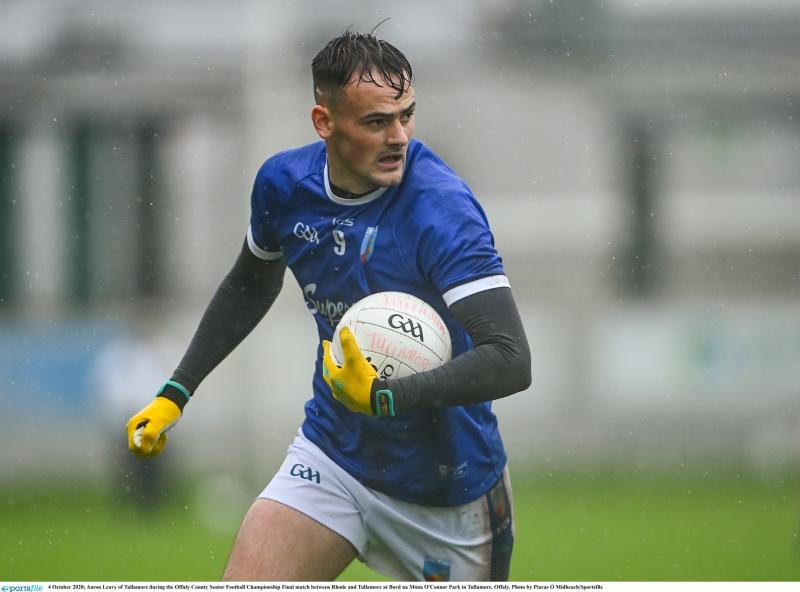 Aaron Leavy, a tower of strength for Tullamore at midfield.

TULLAMORE laid down a real championship marker when they annihilated a beleagured Bracknagh in Tullamore on Saturday evening.

Tullamore were brilliant in the first half as they ripped Bracknagh asunder with some fantastic, incisive attacking football. They were not as good in the second half as they operated in cruise control but they were still far the better team and could very easily have ran in another four or five goals.

This, however, was an excellent Tullamore performance, one that will make all the other teams did up and take notice and it marks them down as very serious Dowling Cup contenders. While Tullamore were always expected to win this, the scale of their win came as a surprise. Tullamore had been far from brilliant when drawing with Shamrocks in the first round while Bracknagh had done well to draw with a fancied Edenderry.

It all suggested that there was mild potential for an upset here but the reality proven to be vastly different. Bracknagh did look a poor side on the evening. They never really got going and were out worked and over powered by the speed and movement of Tullamore. The credit for this win has to go to Tullamore and they were extremely impressive.

Their first half performance was sensational at times as they ended the game as a contest at an early stage. Tullamore had bit the bullet by starting their Offaly U-20 All-Ireland winning heroes, John Furlong, Cormac Egan and a sub, Ciaran Egan. Another of that team, Oisin Keenan-Martin had been named to start but came on as a sub, and far from weakened the team while Harry Plunkett, who had been on the U-20 squad earlier in the season before departing before the Leinster final, also started.

It was only a matter of time before Tullamore showed faith in their outstanding young talent and they were rewarded with the best half hour's football and best overall performance seen in the championship to date.

This game was in the bag for Tullamore at half time. They led by 3-7 to 0-3 at that stage and there wasn't a snowball's chance of them being caught. Some of their first half football as they attacked at pace and moved with great intent took the breath away and they were so clinical. They had 1-7 on the board, with the goal coming from Cormac Egan in the third minute, before Bracknagh registered their first point through wing back Stefan Geoghegan in the 21st minute. John Furlong and Luke Egan got in for further goals and a shell shocked Bracnagh must have felt they had been hit by a train in the first half.

Tullamore were not as good in the second half but they didn't need to be. They only added a further seven points while Bracknagh got through for five points but there was never a remote possibility of an upset. Indeed, Tullamore continued to rip the Bracknagh defence open and brothers Harry and Luke Plunkett, Patrick Cosgrove, and John Furlong all got in for clear chances – they really should have got three or four of them and finishing goal chances is likely to be on manager Niall Stack's agenda in the coming weeks.

Tullamore were in control in all sectors and they had outstanding individuals all over the field. Diarmuid Egan and Luke Egan (no relation) were brilliant in their attack throughout, John Furlong had a super first half, tackling so well while Johnny Moloney – Moloney prospered in a utility role in the Tullamore defence -, Ciaran Burns, Declan Hogan, Michael Brazil, Ciaran Egan, Aaron Leavy, Cormac Egan and Harry Plunkett all stood out.

For Bracknagh, it was a demoralising evening. Stefan Geoghegan was their best player as he got forward for three points from wing back but there were not many straws of consolation for them to grasp on.

Diarmuid Egan (Tullamore): A few contenders on the Tullamore side. Johnny Moloney was immense, Luke Egan did a huge amount of work in the attack and Aaron Leavy was so solid at midfield. The choice may be a bit from the left field but Diarmuid Egan was fantasic in the Tullamore attack. He did exactly what a team would want a centre half forward to do, coming out for the ball, holding his position, taking his man on, scoring a couple of points and spraying around some delightful passes. His football has really improved this year.

Tullamore started at a fierce pace and Cormac Egan's third minute goal put them on the road to victory.

A very solid performance by Paurig Gallagher who was firm in his decisions, fair and there was little contentious here.

The young talent that Tullamore have and where they could lead them to in the coming years. They have some of the best young footballers in Offaly and starting John Furlong, Cormac Egan, Harry Plunkett and Ciaran Egan was the right decision for them. Nothing untoward happened here but Cormac Egan did pick up a nasty injury in a recent Tullamore senior “B” hurling game which thankfully didn't prove to be serious but there is an onus on referees to protect any young player, particularly ones who could be targetted.

This was the second game in O'Connor Park and as expected, it held up very well. The game was well hosted.