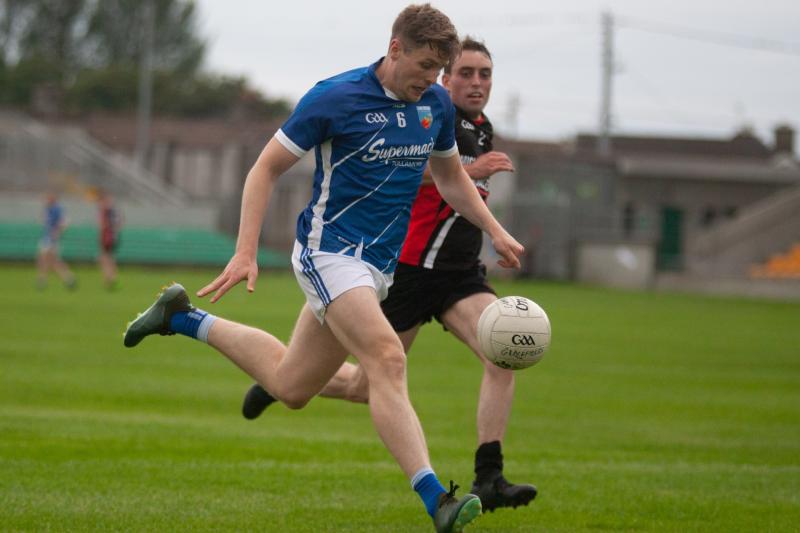 Johnny Moloney had a great second half for Tullamore.

A DRAW may very well have been the fairest result of all but there was still a quite unsatisfactory ending when referee Martin Carty blew up full time almost bang on the 60 minutes – with Tullamore and Shamrocks level at 1-11 each, the Birr clock showed 29.57 minutes played in the second half.

Even allowing for the likelihood that the referee had started his watch a few seconds before the St Brendan's Park clock keeper, there surely should have been a bit more time added on – there were three second half substitutes, though one of these came during the water break while there were a couple of other brief hold ups.

The final whistle was greeted with frustration by both sides but irrespective of that, they will both be happy with sharing the spoils after a thrilling and very closely contested encounter. There was nick or nothing between the sides the whole way through and this was a game that could have swung either way,

The teams were very evenly matched in the first half with Shamocks asking plenty of questions of the favourites. Both sides had spells in the driving seat and they were level on three occasions before the Tullamore goal came in the 27th minute – Diarmuid Egan raced through, off loaded to Luke Egan and when Luke's shot was blocked, Diarmuid was on hand to tap home.

Tullamore had missed a good goal chance in the 11th minute with Alan Heffernan doin very well to get back and block Patrick Cosgrove's shot. Johnny Moloney missed the “45” and one a couple of minutes later and they were tied at 0-3 each at that stage. Jack Bryant got two super opportunist points to put Shamrocks 0-5 to 0-4 ahead. Egan got his goal before Paddy Dunican's free left Shamrocks trailing by 1-4 to 0-6 at the break.

It continued in the same vein in the second half. Tullamore led by 1-6 to 0-7 after 35 minutes before Shamrocks levelled up with points from Paddy Dunican and a Nigel Dunne mark. Tullamore goalkeeper Corey White made a good save from Jack Bryant before Tullamore pushed ahead with points from Luke Egan and Johnny Moloney.

Shamrocks got the break they needed in the 42nd minute with a somewhat debatable penalty when Jack Bryant was adjudged to have been fouled and Paddy Dunican slotted to the net. Moloney made it 1-9 each at the water break.

A Moloney free put Tullamore back in front, Shamrocks got their noses ahead with points from Gary Hutchinson and Nigel Dunne (free) before Moloney equalised with a 54th minute free. Johnny Moloney had chances to win it for Tullamore, kicking two wides as Shamrocks visibly tired before the final whistle left it all square,

It was an immensely enjoyable game of football between two good sides who gave their all and had plenty of quality play. Johnny Moloney was brilliant for Tullamore in the second half as he pulled them back from the brink of a devastating defeat while Kevin O'Brien, Michael Brazil, Aaron Leavy, Diarmuid Egan in the first half and sub Cormac Egan also impressed for them.

David O'Toole-Greene put in a terrific shift for Shamrocks, working his socks off and driving forward at every opportunity while Conor Condron, Shane O'Toole-Greene, Padraig Cantwell, Alan Heffernan, Luke Molloy in the first half and Jack Bryant also showed up well for them.

Johnny Moloney (Tullamore): A choice between Johnny Moloney and David O'Toole-Greene. Johnny Moloney gets the nod as he was super in the second half and almost won it for Tullamore, though he did have some misses.

Shamrocks penalty goal in the 42nd minute was a big moment and they would have lost without it.

Martin Carty had a good game, though he ended up a central figure as he didn't play any injury or stoppage time at all, which just seemed wrong. He was firm in his decisions and he got most of them right. The Shamrocks penalty did look a bit soft and he was a good bit away from it at that time though had a free been given to Jack Bryant further out the field, there would have been very little said.

It is hard on teams having to tog out and prepare in stands rather than dressing rooms because of Covid-19 restrictions. Everyone is looking forward to more normality resuming in the coming months but at least the games are allowed go ahead and with 500 spectators allowed in here, most people that wanted to attend could get a ticket.

It was a busy and long day for Birr officials, with an hour and a half gap between this and the preceding Ferbane v Cappincur game but they embraced the whole occasion and there were no issues,.