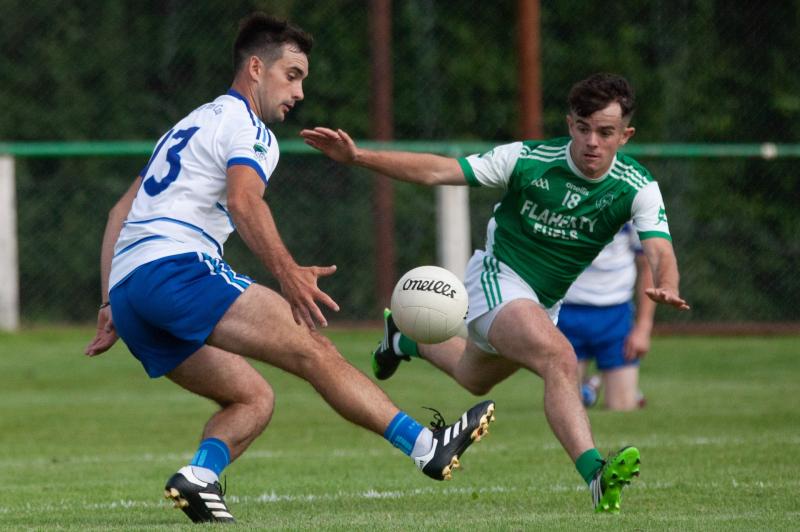 IT all ended up very comfortable, very straightforward for Ferbane as they sauntered to a win over Cappincur in the first round of the Senior Football Championship in Birr on Saturday afternoon.

Pushed all the way in the first half and glad to be ahead by 1-8 to 0-8 at half time, Ferbane played way better in the second half as they pulled away for a facile win.

A 2-3 haul from the outstanding Ryan Heavin set Ferbane in an ultimately impressive win and with Cian Johnson still injured, they look well equipped to challenge for the Dowling Cup.

Cappincur played all of their football in the first half but ran out of steam and ideas in the second half. In fairness to Cappincur, they were always going to find it hard to live with Ferbane once they found their momentum and that was very much the case here.

Cappincur gave the favourites plenty of it in the first half. They trailed by 0-3 to 0-1 after five minutes and were fortunate that Ferbane were wasteful in that opening spell. The winners kicked four wides in eight minutes- Ferbane will be disappointed at their wide count of 13 - and Cappincur played their best football after this. Kevin Minnock was a livewire in the first half, showing good pace and movement as he gave Leon Fox a difficult time. He got three points as Cappincur led by 0-5 to 0-3, 0-6 to 0-5 and 0-7 to 0-6.

That, however, was as good as it got for Cappincur and by half time, Ferbane had their noses in front. The key score was a 25th minute goal from Ryan Heavin, tapped home after Joe Maher's point shot had been half blocked.

That 1-8 to 0-8 half time lead gave Ferbane the cushion they needed and they did not show any mercy in the second half. From the restart, it was clear that they meant business. A Ronan McGuire shot was deflected out for a “45” that Jack Cullinan pointed and Paddy Clancy's point was followed by Ferbane's second goal. David Nally was hauled down by Peter Daly and Joe Maher made no mistake from the penalty to make it 2-10 to 0-8 in the 37th minute.

Cappincur were a beaten docket and Ferbane pushed on. Ryan Heavin brilliantly punched home a 46th minute goal after a great ball in by Paddy Clancy and with a 3-12 to 0-8 lead, there was no way Ferbabne could lose. The winners only managed two further points but could have got more if they really went at it. Cappincur to their credit tried hard late on and got five points but it all fizzled out very tamely as Ferbane clearly eased back.

It was a decent performance by Ferbane and they will be happy with the win. It sets them up nicely now and they will improve. Ryan Heavin was the best player on the field while Stephen Wren, Shane Nally, Jack Egan, Kyle Higgins, Joe Maher, Oisin Kelly and Ronan McGuire caught the eye for Ferbane.

The defeat won't have come as a surprise to Cappincur and their target game is the third round against Durrow. They produced flashes of good football here but weren't consistent and came up against a better team. P.J. Daly, Diarmuid Carroll, Eoin Carroll, Bill Carroll, Kevin Minnock and sub Sean Courtney were their best players on the day.

Ryan Heavin (Ferbane): Ryan Heavin had a great game for Ferbane. There was a lot more to his display than the 2-3 he scored as he showed well and linked with colleagues.

Joe Maher's penalty goal seven minutes into the second half gave Ferbane a 2-10 to 0-8 lead and killed the game as contest.

Adam Kinahan has made his name as a hurling referee but he refereed this very well. He clearly knew the rules, he applied them with common sense and showed cards when deserved. Peter Daly was fortunate not to get a black card after pulling David Nally down for Ferbane's penalty, The veteran Daly was on a yellow after needlessly throwing Joe Maher to the ground in the first half while trying to retrieve the ball in the first half and a black card would have resulted in him being sent off. Ger Treacy should have got a late penalty for Cappincur but the referee seemed to be unsighted.

Ferbane's form will be watched closely as they are one of the main contenders for the Dowling Cup. They have plenty of work to do but they looked good.

This was Birr's first Senior Football Championship game to host in almost fifty years and they were delighted to do so. Birr was selected as the venue as 500 spectators are allowed here and in O'Connor Park while the limit is 200 in other venues. They were perfect hosts, with ample stewards who gave a warm welcome to all supporters. Their pitch was perfectly presented and it was a nice occasion.

Cappincur play Rhode in the next round while Ferbane have Durrow.