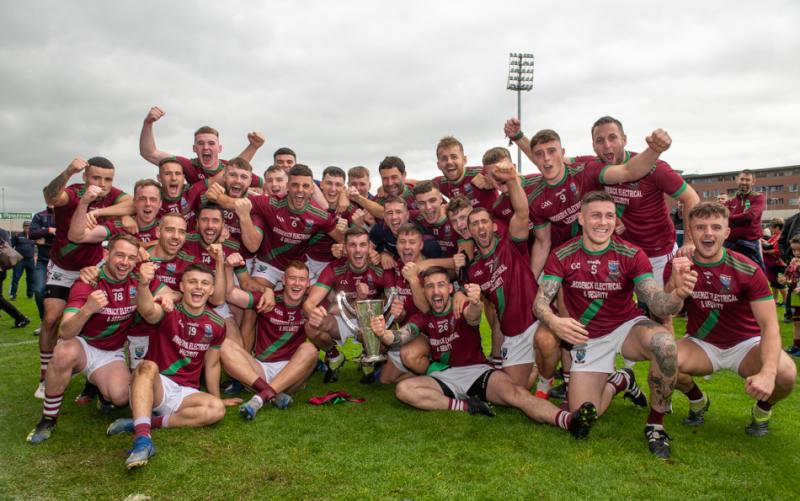 Offaly native Martin Murphy picked up his third Laois Senior football championship medal on Sunday, this time with Portarlington, and he spoke to the media after the final.

“We expected an onslaught. I think defensively we have been very good all year, even after lockdown. I know we had a bit of a blip against Portlaoise in the first round of the league but after that, we worked hard on our defense. Today proved that we’ve been doing with our defense has worked.

“Credit to the players involved. Credit to all 15, 18, 19, 20 players that played today. They were immense and the panel of thirty players are a credit to the town. They put in a fantastic and a massive effort, even during lockdown with our strength and conditioning coach.”

The Gracefield man was appointed as Portarlington’s manager for the 2019 season, and they came close to taking a huge scalp in his first year in charge. Murphy’s men gave Portlaoise a serious battle in the 2019 semi-final but came up just short in the end.

“This team is two years in the making. I honestly believe and I’d say a lot of people in the public would say that we should have beaten Portlaoise here, back in 2019, but for some silly reasons. I think that this team could in fact be going for three in a row at this stage and probably should be.

“They didn’t perform to what they should have done, and we were a bit unlucky against Portlaoise in the semi-final in 19’. We circled the wagons a little bit afterwards, we came back, and we said, ‘look it, that’s not going to ever happen to us again.’

“So, we pushed it out to as far as we could today and I think, in fairness, the performance shows that those lads had it in them all along to do this. Hopefully now, after the next week or so, we’ll get back into the championship fever again, and we’ll be ready for 2021.”

Murphy had won two Laois Senior football championships, so Portarlington knew exactly what they were doing when they brought him in. Unlike the previous two narrow final wins with Stradbally though, this one was more straightforward

“Maybe I’m a bit fortuitous, I don’t know. Maybe I end up with a team that has a good batch of players. I think in fairness, the tag of having won it with Stradbally alone sat heavily for the last few years. Having been with other clubs and other teams, and not having won a championship, this dispels all that now.

I’m delighted today that we actually won well. The two Stradbally county final were tight, and it wasn’t good for the heart.”

Murphy and Portarlington will enjoy the celebrations for the next few days, but they know they’ll be getting straight back to work very soon.

“I believe we’re back in action next weekend. I think we’re fixed to play the Division 1 league final. I don’t know what way that’s going to be. I’d be hoping, maybe, we could get an extra day or two on that. That’ll be down to Portlaoise, I’m sure.”

The last two Portarlington Senior football victories prior to this one was actually won in the same year, and Murphy will be hoping that they can repeat that trick a second time around.

“Joe O’Dwyer keeps telling me that! Look it, we’ll take this one, we’ll go home, and we’ll enjoy it. We’ll see what happens. I’m sure the Portlaoise’s, the Graiguecullen’s, the St Joseph’s and the Stradbally’s of this world will be coming back down and they’ll be taking pot shots at us because we’re at the top.

“If I’ve learned anything, it’s not to take anything for granted when you’re involved in football management. We’ll just enjoy this, and we’ll live in the moment.”

Duignan thanks Shane Lowry after U20 All-Ireland victory

MEMORY LANE: Who will you recognise in this gallery of team pictures from the Offaly archives?