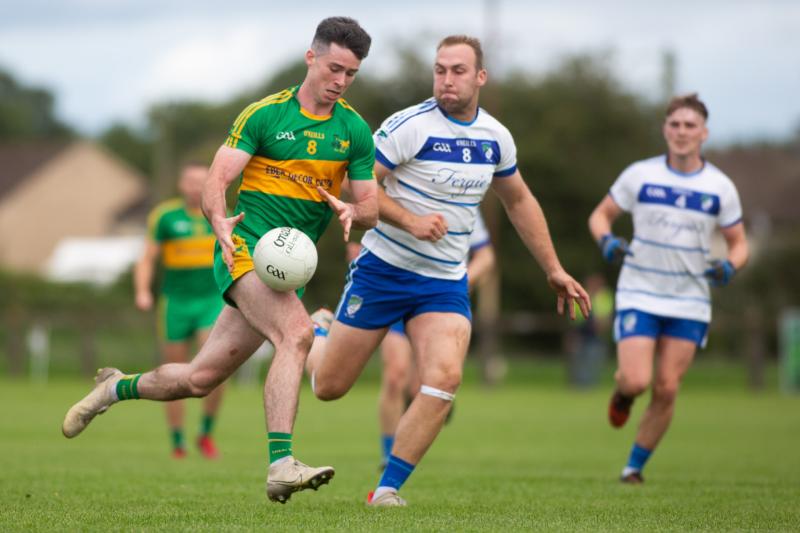 Absentees from last year: None;

Prospects: Cappincur continue to confound expectations at senior level. They beat Tullamore last year and have been close to other big scalps in recent years. Their target here is a quarter-final. With the top team in each group going into a semi-final and the next two into quarter-finals, that is achievable for them. They will be underdogs against Rhode and Ferbane and their biggest game of the year is against Durrow. This could dictate a quarter-final and relegation play off for the two teams. At the moment, Cappincur are slightly ahead of Durrow and they don't have the dual complications their opponents have.

Any absentees from last year: Oisin Cusack out injured for first round of Championship having been absent for all of the league campaign - hope to have him back later in the year;

New players: Barry O'Rourke, Robbie Fahey and Terry Byrne have transferred into the Club this year. Brian and Niall Geraghty have returned from abroad and are back on the panel for this year;

Prospects: A lot will depend on how much commitment they can get for football. Durrow didn't function at all in their last appearance in senior football and quickly went back down. Will things be any different this year? They should be. They are a bit older, wiser and stronger and they produced one of the football displays of 2020 in their senior “B” final demolition of Gracefield. Their problem is they have a good few dual players and some of these will be more focused on senior hurling with Ballinamere. Offaly senior hurling panelists, Ciaran Burke, Ross Ravenhill and Brian Duignan are all fine footballers but hurling is their first choice game. It's just hard to know with them and staying up is their priority. Their game against Cappincur will dictate a lot and as things stand, Durrow are among the relegation contenders.

Prospects: Ferbane are contenders for the Dowling Cup and it will be a huge surprise if they don't come out of this group. They are unlikely to lose to both Durrow and Cappincur and they have the quality to win. The fitness of Cian Johnson is crucial for them, though. An ace scoring machine, Johnson didn't play at all for Offaly senior footballers this year as he battled a very problematic groin injury. There are serious doubts about Johnson's fitness and this brings on doubts about Ferbane's ability to win the championship if he isn't firing on all cylinders. They will still be very strong and the excellence of Cathal Flynn for Offaly U-20s suggests that he will have a new level of influence for them. Ferbane have a chance but we will have to wait and see.

Prospects: Still the team that everyone has to beat and the championship favourites. Rhode have a tremendous record and they are absolute masters at performing. It will be a major shock if they don't come out of this group and they are favourites to qualify as table toppers. The impression remains, however, that the gap is closing between them and some of their main contenders. They almost lost to Edenderry in the semi-final last year and can expect very tough opposition. If someone gave you €100 to back on a team you would have to put it on Rhode but they could be vulnerable in big knockout games and could come up short this year.

Prospects: Bracknagh did well to stay senior last year, sending Clara down in a relegation play off. They are relegation contenders again but they also have realistic prospects of a quarter-final. They will be underdogs against Tullamore and Edenderry but are capable of surprises while their game against Shamrocks could determine whether it's a quarter-final or relegation play off. They have some fine emerging footballers and while they won't be strong enough to win the Dowling Cup, they have the quality to test teams.

New players: David Hanlon and Sean Pender have returned to the panel;

Prospects: Edenderry's prospects are being talked up in a lot of quiet corners, they have David Hanlon and Sean Pender back and they are second favourites at the moment. They really should have beaten Rhode in the semi-final last year, letting the game slip late on and then losing in extra time. The word of mouth coming out of the Edenderry camp is very good and they have a lot of quality. It looks like they have most of the players they want on board this year. They have one of the best forwards in Offaly in Cian Farrell and they are hot favourites to emerge from this group – their game against Tullamore could dictate who goes into the semi-final. They are capable of having bad games, off days but they are potential champions.

Any absentees from last year: None;

Prospects: Shamrocks have a decent back bone and in Jack Bryant, they have one of the best emerging footballers in Offaly. Nigel Dunne has scored freely for them all his career and while he is not in the winter of it, he is still a really potent club footballer. They have a handful of players as good as anyone else in the county but Shamrocks' problem is that their combined fifteen is not as strong as the main contenders. This means that it is difficult to envisage them winning a championship at the moment. They command respect though, and they will have a good chance of making the quarter-finals. Their game against Bracknagh is the big one.

Absentees from last year: None;

New players: 2020 minors such as Cormac Egan, John Furlong and Harry Plunkett are now eligible and they will greatly boost Tullamore;

Prospects: Tullamore should be serious championship contenders this year. They were beaten by Rhode in the final last year but really scraped into it. They had been beaten by Cappincur in their first group game, squeezed out of the group and then beat Ferbane in a penalty shootout in the semi-final. They were outplayed by Rhode for long periods in the final, yet were snapping on their heels at the death. Tullamore should be a lot stronger this year. The availability of three of last year's Offaly minors John Furlong, Cormac Egan and Harry Plunkett strengthens their hand considerably. It would be wrong to put too much pressure on them, they are young and club senior football is a big step up but the trio have the ability to play senior county for Offaly and will be comfortable at club level in a short frame of time – Egan and Furlong won't start in the first round against Shamrocks as they have had a hectic week with an All-Ireland U-20 football final on Sunday, 2020 minor football semi-final on Tuesday and possibly a final on Thursday. Can they provide the missing link for Tullamore this year? Hard to know but Tullamore will be way stronger for having them and this means that they should be better than last year, when they weren't far away. They do have their limiations but they should be able to come out of the group. They are behind Rhode and Edenderry in the pecking order at the moment, level with Ferbane and they are in with a shout.

OPINION: A rising tide raises all ships for Offaly GAA