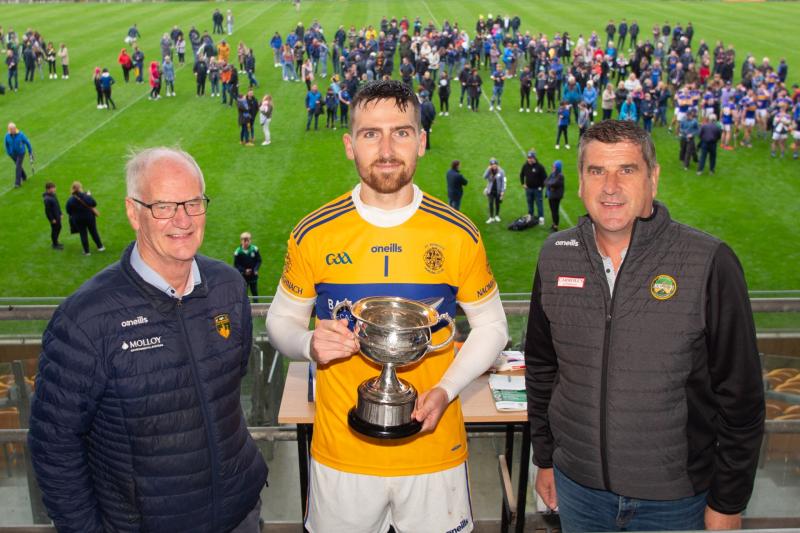 For every club that goes to post in the Offaly senior hurling championship, the ultimate goal is to won the Seán Robbins cup. For some clubs however, the weight of history demands even more.

Call it a good thing or a bad thing, but St. Rynagh’s don’t just pop up to win a title, then slip back in the pack. Even the most successful clubs in Offaly have been known to snatch one title out of nowhere that was somewhat unexpected – whether that’s Kinnitty in 1967, Birr in 1971, Coolderry in 1986, and most famously of all, Tullamore in 2009 – but that has never been the way of the Banagher club.

The first 16 senior championships won by the club were effectively won by three different teams, so when this current generation broke a 23-year drought by winning the 2016 championship, the pressure was on for add to that success and to be able to stand alongside the great St. Rynagh’s teams of the 1960s, 1970s, 1980s and early 1990s.

That pressure proved too much in 2017 and 2018, but now it feels like this group of players has learned how to handle the pressure, and they’re thriving on it.

“Personally this is my seventh county final” said team captain Conor Clancy after the win.

“We’ve been there knocking on the door since 2012. It took us a long time to get through. When we finally did get through we thought we were going to go on a run. We lost two years in a row before we got our next one so there is that bit of hurt there, and there is always that weight of expectation”.

“When I started with this group of lads, 15 of us were under the age of 25. Now we are the right age, we have a lot of older lads but we still have the right balance with youth coming through as well. There is always a weight of expectation in a club like Rynaghs. The club always wants success, we do ourselves and that’s why we’re here, that’s why we hurl.

Of course, history can apply weight in different ways too. Clancy cited how the first game of the year hasn’t always been plain sailing for the club, with several tight scrapes as well as their opening round defeat to Seir Kieran in 2018. The problem with this summer is that a similarly ropey start could have cost them a title.

“We have been notoriously bad in the first round of Championship, every year we’ve played we’ve barely gotten over the line or not gotten over the line. We sometimes take four, five games to get into it and then make a push so training had to be geared towards it.

“Every time you went training, you had to get to that championship pace. It was very hard as the touch wasn’t there, the handling wasn’t there. The weather was hit and miss, training was sloppy. Matches made us, the Offaly league done wonders from us. We took some good beatings off some good, strong teams. It’s done wonders for us.

“Today, it was a savage, intense start. You could see the lads were in shape. Kilcormac-Killoughey, they always come out flying. Then it was, another county final, another early goal for Kilcormac! But the scores came at the right time. Kilcormac got a few chances and missed them and we managed to take ours, I think that was the big difference in the first half especially”.

A huge part of getting ready for this was of course working during lockdown, which Clancy freely admits was tough going.

“I’m not going to lie, it’s a nightmare. It’s very hard. Where everyone found it tough was when the county finals were called off in October, you didn’t know when it was going to be so it was very hard to keep yourself motivated. That comes back to the management. Ken (Hogan) is very tuned in, he gave us a break for nearly two months. It was one of the best things he could have done as it let us regroup and let us have our offseason. When we came back to that field then in April time, the boys were hungry.

As one of the club’s five county players, Clancy wasn’t able to be part of a lot of the club’s work, but he said that he knew from the moment they got back, that there had been no slacking among his colleagues.

“There has to be a huge element of trust there” he said.

“Myself and a few of the boys, we were away with Offaly and we had to look after our own house and we had to trust that the boys would do the same. The level of training that goes on in our field, I never doubted that the boys were working hard. The same with ourselves, as soon as Offaly was finished, we were eager to get back. We finished with Offaly on the Sunday and we were back training on the Monday evening in the rain in Banagher. That’s how much it means to us as Rynagh’s men, as club men. We are always there together and Rynagh’s and the club will always come first”.

Duignan thanks Shane Lowry after U20 All-Ireland victory