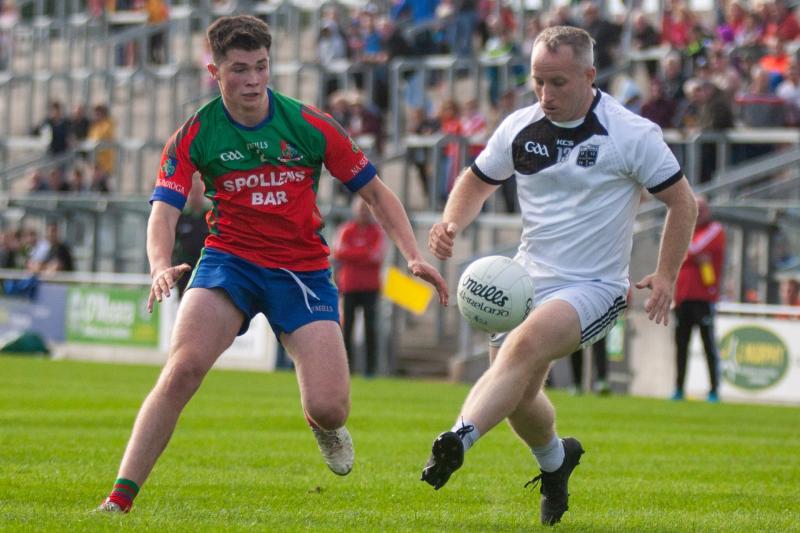 HE fractured vertebrae in his neck in a car crash and then suffered another injury which forced him out of the Leinster final but remarkably, Offaly Under 20 football captain Kieran Dolan is back pushing for a place in the All-Ireland decider.

The resilience the young Mucklagh man has shown for the past year has been incredible and he recalled how the accident happened about a year ago after the league final against Clare.

He was a back seat passenger in a car with a number of others.

“I was in hospital for a week. I had surgery done, they got a metal cage and put my neck in it, a neck brace for 12 weeks or so,” said Dolan.

“And I was young and fit and healthy and that's why I recovered so well. I'm grand now... I was very lucky, I've been told that a lot, I was lucky and unlucky. Thank God I was the only one hurt, all the rest of the boys were grand.”

He says young people can think they're “invincible” at that age and he is now more wary of travelling in cars.

He was back for the club championship with Shamrocks against Bracknagh and when a doctor advised him to play just 15 minutes on his initial return to action, he stayed on the pitch for half an hour instead. He featured in subsequent Shamrocks matches before their elimination at the group stage.

When he was unable to play, he continued training himself. “I done a good lot of gym work during lockdown, building up muscle. I've plenty of exercises to do for the neck and mobility stuff so I looked after it.”

He then had to regain his full confidence for football, going in hard into tackles, particularly where the head and neck might be impacted.

“It took me a few months in terms of diving in for a ball. I think the fear is gone now completely. I remember the Westmeath game, just diving for a ball, I mightn't have done that six months ago, I'd have been too wary with my neck.”

Both Dolan's parents are from Roscommon and perhaps his toughness is in the blood. A cousin, Aoife O'Rourke from Castlerea, boxed at middleweight in the Tokyo Olympics.

“She lost to a Chinese boxer [Li Qian], who was ranked number two in the world. All my family down in Roscommon are very sporty.”

The player has been involved in the Offaly development squads up to inclusion in a minor panel under John Hughes, and along with that, he attributes the success of this panel to the Faithful Fields facilities.

“The gym is there and a lot of us were in the gym in lockdown and stuff. The development squads are always good, taken very serious. Probably only train about once a week until minor and then from minor on things really heated up.”

Like many of his teammates, Dolan says the players always had it in their minds that a Leinster title was a realistic prospect.

“We set out to win a Leinster, that was to turn over, Dublin, Meath or Kildare, they're usually the powerhouses underage especially in Leinster. At the start of the year we set out to turn one of them over, get to a Leinster final and win a Leinster. None of us were really talking about an all-Ireland but we're here now and we're definitely going to go out to win it.”

He agreed that Offaly have grown since coming through a close encounter against Wexford.

“It's mad. We only beat Wexford by a point and then we go out and beat Dublin and Cork by three and five points. It's funny, I don't know. I thought [against] Wexford or Westmeath we were clearly the better team but we didn't kill them off.

“We did it against Dublin and Cork of course, we were just... I don't know what it was, we were a bit lackadaisacal. We said it before the game, if we got out of Wexford Park by a point, we knew it would be tight. We knew we were favourites and we probably the better footballers, we just knew going down somewhere like Wexford and win by a point you'd be happy enough.”

The games came along quickly after that, too quick for a player like Dolan dealing with injury, but so swiftly that the team could build momentum.

“The momentum is huge. We're playing every week so every performance, Wexford, Westmeath, Dublin, Cork, we've upped it. Every player, individually, as a team, the tackling, the shooting, everything has improved.”

Injury meant he had to witness the dramatic Leinster final defeat of Dublin from the sidelines. It wasn't easy for the squad captain.

“It was very tough. I'd nearly a sick feeling in my stomach watching the match. I was very upset, it took a few days to sink in with the injury and all that craic. But I've great faith in Tom Hyland who came in, he's a great player.”

Though attendance at the matches has been restricted, Dolan reports that the fans' support has meant a lot to the players and he has picked up on the goodwill in his job at the Fingerboard store too.

“Towards the end of the Dublin game, the Uibh Fhaile chants. As well, in the Cork game when Jack Bryant scored that last goal it was just amazing. Me and all the boys were just hugging each other. It was just class, chatting all the people in the shop. It's good.”

All going well, Dolan will work himself to a position where he can be an Offaly senior player but that will require him to commit to a lifestyle unlike most of his peers.

“The commitment is very big, especially if you are going onto the senior panel or whatever... The commitment? I don't really mind the commitment, even when you're not winning, but when you're winning it's just so worth it, it's unreal.”

For youngsters like Dolan, Offaly's GAA history is exactly that – history – but he is aware of the great tradition the county has in football and hurling and how that distinguishes the Faithful from so many others. He is now part of a group which is adding to that heritage.

“I know about the history. It really means something to be from Offaly, compared to… I'm not going to name any other counties... when you're playing another county [you think] what have these every won? But in Offaly, there's huge tradition, there's great success, I know in the last 20 or 30 years there hasn't been much but hopefully now this is a new chapter and a stepping stone to something in Offaly hurling and football.”