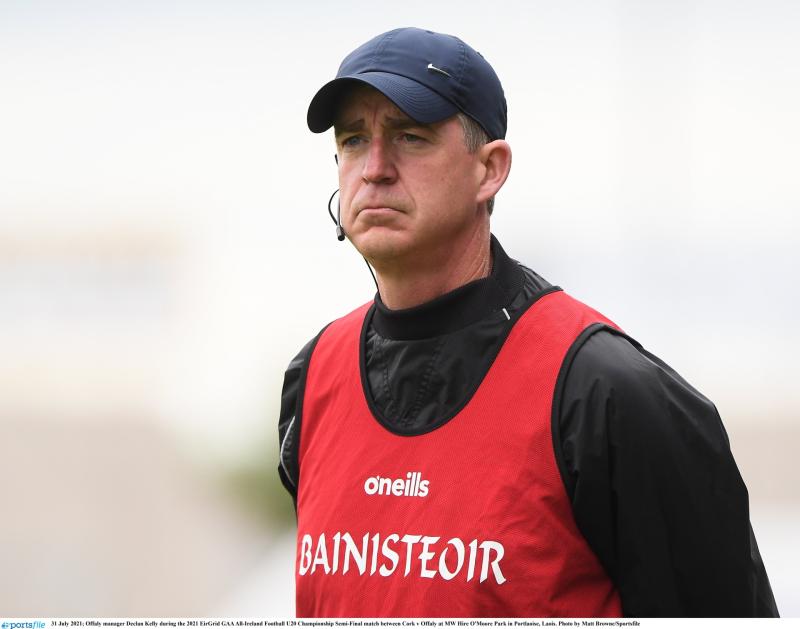 EVERY cloud has a silver lining but the postponement of the All-Ireland senior football semi-final between Kerry and Tyrone on Sunday has been tinged more with gold for eager Offaly football fans – though there was frustration and criticism on Tuesday afternoon as supporters faced lengthy delays of hours in their bid to purchase tickets on the Ticketmaster website. Some supporters got as far as having tickets in their purchase basket after waiting for hours when the website crashed and they had to go back to square one.

The postponement of Kerry and Tyrne means that the All-Ireland U-20 Football Championship final between Offaly and Roscommon will now proceed in Croke Park with an All-Ireland ladies football semi-final, and it should have ended the desperate hunt for tickets among supporters.

With 24,000 still allowed into the game, it means that there should be no problem satisfying demand in Offaly and Roscommon. The game will be followed by an All-Ireland ladies football semi-final between Cork and Meath on Sunday afternoon.

There was, however, real frustration and delays for supporters as they attempted to purchase tickets on the Ticketmaster website after they were released on Tuesday morning. The website crashed shortly after the tickets went live and just after 2.00pm on Tuesday afternoon, there was over 13,000 people in the queue to buy tickets – this reporter was number 13,350 in the queue when he entered it at 2.00pm and almost an hour later, he had only moved up to 12,741.

The long queue may have been partly caused by Dublin and Mayo fans looking for tickets for their All-Ireland senior football semi-final on Saturday but this wasn't clear and there was no clarification from Ticketmaster on their site about how long the wait could take – apart from a message saying there could be an “extended wait time”!

The delays prompted the Offaly GAA County Board to release a statement on Tuesday afternoon, stating that they had received complaints from many supporters and had been in contact with GAA headquarters about the delays. “They are, in turn, liaising with Ticketmaster and passing on our frustration. Unfortunately, it is completely out of control of Offaly GAA County Board,” the statement outlined.

Prior to the postponement, there had been a desperate search for tickets going on in both counties. Offaly and Roscommon had initially been given an allocation of 1,000 tickets and the Offaly County Board had decided to distribute these among clubs – with approximately forty clubs in Offaly, each one could have expected an allocation in the region of twenty.

The Tyrone and Kerry County Boards had been allocated 6,000 each and a further 10,000 were to go on sale to the general public later in the week. The postponement of the Tyrone and Kerry game because of positive Covid cases in the Tyrone camp has come as a dream for Offaly and Roscommon supporters.

There is huge demand in Offaly and Roscommon for their biggest game in years and the performances of the U-20 team has created a wave of excitement in the county. And not just in Offaly football areas but also in traditional hurling areas where the big ball game would scarcely warrant a second glance at times.

Offaly GAA chairman Michael Duignan was certainly relieved when he spoke on Monday afternoon, stating that there had been a massive demand for tickets and it would have been impossible to satisfy everyone. Now they will receive a much bigger allocation and people who won't have access to club tickets should be able to get them online.

The postponement of Tyrone and Kerry means that everyone who wants to see the Offaly and Roscommon game should be able to gain admittance. A double fixture like this would normally be expected to attract in the region of 8,000 to 12,000, though the numbers in the online queue for tickets on Tuesday afternoon suggested that it could be in excess of this.

The Offaly and Roscommon final had initially been fixed for Croke Park to facilitate more supporters to see it but it has now worked out far better than anyone could have anticipated in the two counties. Not only will the final be held in Croke Park but there will be a full crowd at it.

The Offaly GAA County Board are also awaiting a response to their request for more people to be allowed to see the big 2020 hurling finals this Saturday. The senior “B” and senior hurling finals between Kinnitty v Drumcullen and Kilcormac-Killoughey v St Rynagh's have been fixed for Tullamore with the intermediate hurling final between Coolderry and Shinrone in Birr. As things stand, just 500 people will be allowed at each venue and this would be nowhere near sufficient to satisfy demand for the senior final.

Normally, a senior hurling final in Offaly would have a crowd of between 4,000 to 7,000, depending on the pairing. Offaly have asked that more people be allowed in – they won't be allowed to open the gates fully but will be hoping that somewhere in the region of 1,500 to 2,000 people will be permitted to attend.

Mr Duignan revealed that they have made their case to Croke Park, who will liase with Government officials, and hope to have a response in the next couple of days. Once the attendance figure is finalised, they will decide on the method for distributing tickets.

Offaly hurling folk hero Ger Coughlan spoke on Monday about the excitement the U-20 football supporters has generated in Kinnitty. While very much hurling territory where they only play football as a past-time that can easily be dispensed with, the brilliant 1980s wing back talked about the benfits that reaching the All-Ireland final can yield for both football and hurling. He remembered being inspired by the achievements of the Offaly football team as he grew up in the 1960s and 1970s – one of his fondest and strongest early memories was of seeing Offaly play a football game in Birr in the 1960s sometime and the excitement that created in him. “I have a vision of Paddy McCormack playing that game. I remember the spectacle of this black haired man coming out onto the field. He was as broad as he was long and he inspired us in his whole demeanour. It was a long time ago but these kind of things inspired us, even though hurling was our game and this U-20 team is doing the same for young people in Kinnitty.”

Now chairman of Kinnitty GAA Club, he revealed that the U-20 team is the source of a lot of discussion among people of all ages in Kinnitty, particularly young people. He remembered the support that Offaly football teams got from Kinnitty and other hurling areas in the 1960s, 1970s and '80s and they received the same support from football areas. “They might be different codes but the support we give one another is very important,” he remarked, adding that it is now being resurrected by a successful football team.

“Young people are inspired by those kind of things. Mulligan (Eugene) and them were hugely inspirational in our time and that stayed with that generation. It sticks in your mind for years and I have a better memory of that game in Birr than almost anything else from those years. We followed them non stop, it was our county, our people and we were so proud of them.”

He saw a glimpse of this at Offaly's All-Ireland U-20 semi-final win over Cork. While spectators were limited at it and Kinnitty were playing a junior hurling match in Birr that evening, the football game created a welter of excitement among the squad, management and officials. “We were all in the Tesco car park listening to the radio and waiting for the result. No one would leave it and we were waiting for Brian Gavin (Radio 3 commentator) to shout that they had it won. We had all landed together in the Tesco car park and there was huge excitement among us when they won. We were fifteen minutes later going into the dressing room than we should have been but no one cared.”

Meanwhile, the Offaly GAA County Board are working on finalising county senior football and hurling managements for next season. Football manager John Maughan and hurling manager Michael Fennelly will both be re-appointed if they want the job and the County Board are speaking to both men. Michael Duignan revealed that they hope to make an announcement in the coming weeks.

See Tullamore and Midland Tribune for detailed previews of all the big games next weekend.