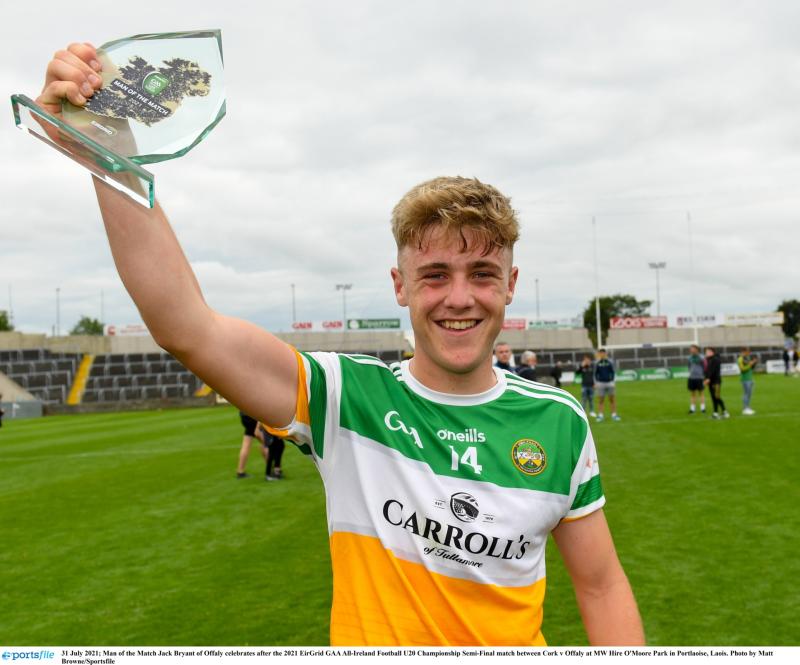 CROKE Park will be no place for the faint hearted next Sunday as Offaly and Roscommon square off in an All-Ireland U-20 Football Championship final pairing that few would have predicted at the start of the year.

It is a final that is being greeted with tremendous excitement in both counties while it is also whetting the appetite of neutrals throughout the country – the quality of football played by both finalists, the flair and pace they have been operating with, has won approval far beyond the county boundaries in Offaly and Roscommon.

It is a unique pairing between two midland counties, who have a small shared border at the west of Offaly along the Shannonbridge area. It is their first ever meeting in an All-Ireland final and getting there is a huge, potentially changing achievement for both. It is hard to judge how well matched the teams are but it looks to be very close to a 50/50 battle.

It is a game that both teams will travel to with confidence believing that they can win. It is a really great pairing for both. Neither side will have any fear factor of the other and they will go full tilt at it.

Both have come on adventurous paths to this stage. With Galway and Mayo there, progressing out of Connacht is never a simple task and Roscommon have shown their quality every step of the way. They hit the ground running with a big win pover Leitrim in the quarter-final, 4-16 to 1-10. They continued that high scoring form in the semi-final against Sligo, firing home 4-13 to Slio's 2-12.

Their biggest win of the year came in the Connacht final against a fancied Mayo team. Roscommon played very well that day and were full value for their 2-11 to 1-7 success. They then showed how could they are by evicting All-Ireland favourites Down in a thrilling semi-final last Friday evening.

Down had been well backed from the start of the year but were met by a very hungry, determined and Roscommpon team. The final scoreline of 2-13 to 1-10 does not tell the full story as Down were well in touch into the closing minutes. The Down captain Shelan Johnston was red carded at a crucial stage after jumping into brilliant Roscommon full back Colin Walsh and the winners took full advantage. As Down pressed up the field and goalie Charlie Smyth having vacated the net, Roscommon broke and Adam McDermott had the simple task of tapping home a match clinching goal.

Offaly have also recorded some huge wins on their way to the final. Significantly, they have improved with every game, dramatically in the case of some players, and they are now a very fit, powerful, fast moving and confident side.

Offaly had a 1-10 to 1-9 win over Wexford in the first round but the win was more comfortable than that scoreline suggests as the losers rallied late. Offaly played better again in a 1-11 to 1-9 win over Westmeath in the semi-final. Again, it was more impressive than the scoreline says – as one Westmeath man remarked lately, it was a “two point hammering”.

Offaly's season took off from here. They went into the Leinster final as underdogs but were excellent as they shocked Dublin. Keeping Dublin to just six scores, 3-3 was a serious defensive achievement and Offaly's fifteen points got them across the line.

Offaly improved again for the All-Ireland semi-final against Cork, producing another top notch performance. Their work ethic was incredible, their finishing superb as they shocked a fancied Cork with a deserved 3-10 to 0-14 win.

It sets both counties up very nicely for this final. Roscommon have a very well drilled team. They have an outstanding full back in Colin Walsh and the battle between him and inform Offaly full forward Jack Bryant will be one of the highlights of the afternoon. It will go some way towards deciding the outcome. Walsh is a physically strong player who doesn't suffer fools gladly but expect Bryant to inflict damage. The Shamrocks' man's movement is breathtaking at time, he is a clinical finisher and he will ask real questions of Walsh.

Roscommon have a strong midfield pairing in Keith Doyle and Enda Crawley and like Offaly, they have some very exciting forward talent. Daire Cregg and James Fitzpatrick ooze quality and class and Offaly will be watching them closely. The tussle between Fitzpatrick and Offaly centre half back John Furlong will be another game defining one. Furlong is just out of minor and has been one of Offaly's unsung heroes. He does the simple thing so well, he concentrates on his primary job of marking and he is very composed on the ball. He is young and he looks to be a senior star in the making but Fitzpatrick will test him.

Offaly will be aware of the danger Roscommon pose but manager Declan Kelly and selectors, David Connolly, Ciaran Grennan and Ger Rafferty will be concentrating on their own game. Offaly have a very strong, ball playing defence. They mark well but they are very fast on the ball and love to get forward. This is typified by corner backs, Aaron Brazil and Lee Pearson – the switch of Brazil to corner back and Fionn Dempsey to wing back worked very well in the Cork game. Both Brazil and Pearson have great pace and they help open up teams when they break out of defence.

The Offaly team will more or less pick itself and the one dilemma facing management is between Tom Hyland and captain Kieran Dolan at full back. The unfortunate Dolan got injured after the Leinster semi-final win over Westmeath, missing the Dublin and Cork games. He was an automatic choice but another man out of minor Tom Hyland has taken full advantage and it would be a big call to leave him off now. Dolan picked up a hamstring tear at training but the extra week has ioven him time to recover and he has a good chance of being fit.

Wing back Rory Egan is another player who loves to get forward while Ed Cullen and Morgan Tynan make a very efficient midfield pairing. Tynan oozes quality and his distribution is superb while Cullen has improved with every game and has a phenomenal level of work rate.

Offaly have loads of scoring potential up front. Oisin Keenan-Martin will be selected at centre half forward but is likely to drift back to link play between the half back line and midfield. Jack Bryant is the main man while the quality of Cathal Flynn and Cormac Egan just takes the breath away. Egan's pace and willingness to take on his man has brought him to national attention. He will be a marked man but marking him and stopping him from playing are two different stories. Flynn has emerged as a key player. He is so good on the ball and he had his best game against Cork. Aaron Kellaghan is also coming into his best form at the right time. He was a bit off the boil early in the championship but has kept working hard, he has got a couple of crucial points and he also had his best game against Cork. He is capable of a very big game in the final.

Cathal Donoghue will complete the attacking line-up. The Kilcormac/Killoughey man is not a natural scorer but that is not his job on this Offaly team. His movement, on and off the ball, is top class, he is so good in possession and he may also be used at midfield at some stage. He has been stand in captain in Kieran Dolan's absence and is one of Offaly's leaders and inspirations.

Keith O'Neill and probably Cormac Delaney will also see action at some stage in the Offaly attack and both have done well this year.

It is an exciting time for Offaly football. There has clearly been good work going on at underage level in recent years and this team is tangible proof of that. They are not a big team but they are very well conditioned, they are strong, they are fast and they are very athletic. They like to attack at pace and they clearly enjoy playing football.

Their performances this year have the potential to change a lot of things for Offaly football. They will give confidence to the people at the coalface and they will inspire younger people coming up. There is a couple of generations in Offaly who have never witnessed county success and this team is giving them a real boost. The spin offs for Offaly football could be immense. There will be rich dividends no matter what the result but a win would really ignite the county.

Offaly have only won this championship once before, back in 1988. There is only one small link between the teams – Ken Kellaghan is a third cousin of Aaron Kellaghan. There could have been another one as Kellaghan's midfield partner in 1988, Mark Plunkett had a son on the panel, Harry – Harry had come on against Westmeath but went on holidays before the Leinster final and has not been brought back onto the panel.

Offaly have tended to get a big bounce from successful underage teams in the past and a number of this team have the potential to play a lot of senior county football. John Furlong, Morgan Tynan, Cathal Donoghue, Cormac Egan and Jack Bryant have obvious prospects and there are others with that potential – not all of those will make it and others will improve as the years go on.

No matter what happens now, this Offaly team has filled the county with pride and excitement. The goal now is to go the whole way and put the icing on the cake. It will be very hard work but the impression that Croke Park will suit this team and the fast type of football they like to play, is unavoidable. It is 50/50 but Offaly have a great chance of a historic, never to be forgotten success.