Offaly manager Fennelly happy with result but disappointed with performance 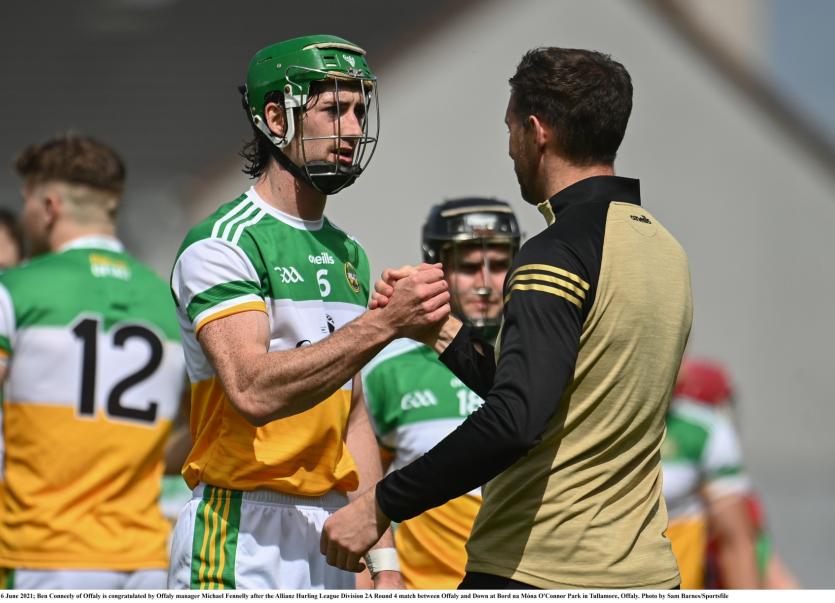 “JOB done and we move on again,” said Offaly manager Michael Fennelly after watching his senior hurling side record a big 2-39 to 2-17 win over Sligo in the Christy Ring Cup opener to book a semi-final place on Saturday afternoon.

Despite almost hitting the forty point mark, the Kilkenny man was certainly not jumping through hoops after what was a disjointed Offaly performance with a particularly error ridden, sloppy first half.

“No I am probably disappointed a bit with the performance,” he admitted. “We had a lot of unforced errors in the first half. Striking balls to players when passes weren't on. Giving away easy possession. We looked a bit shaken, well maybe not shaken but we looked a bit nervy and making errors.

“We made life hard for ourselves. They to be fair got a good goal in the first half. They got a bit of momentum then. We led by eight points at half time, it was a decent lead. I wouldn't say it was over but we had more to do and the boys dug a bit deeper then. Our performance was much better in the second half.

Offaly to have another Olympian in Tokyo

Three Offaly men for the Olympics, one Offaly woman for the Paralympics

“Definitely we have a bit of work to do. We nearly hit the forty point mark which is good. We had a heap of wides too, we need to look at the efficiency of that too. All in all, it was okay. We had a long spin up to Sligo here and we need to get back to the training field and get working again.”

Sligo played with real intensity in the first half when their work rate seemed to be much higher than Offaly's. Fennelly agreed:

“You would expect that to be fair to them and they stayed in the game for that period of time which was key for them. Sligo have been going well for the last two years. They have got two promotions in the last two years. They are a decent team and they are on the way up. They have a bit of momentum and they got a bit of rhythm there at times. It was a decent game for our lads. We were up in Sligo in their back yard and our lads did okay. They got to grips with it after a while and did better.”

2-39 represented a good scoring return despite all the blemishes.

“It is good scoring and that is with a lot of wides. We probably didn't test their goalkeeper too much. One of the goals was when a ball just dropped in at the end. We took shots from too far out. We need to bring it in closer to the goal so that is something for us to work on.”

When it was suggested that Offaly really need to get out of the Christy Ring Cup, he replied:

“They do but its easier said than done. Whatever comes to us now in a semi-final, we will know that in a week or two weeks time. We just have to look after ourselves and keep training hard. They are training really well. We had a great training session last week. Every training session has gone really well. We were hoping for a better performance today. We didn't get it but we still got a good win. That is okay. We were never going to have a perfect performance.”

He agreed that even if Offaly produced a perfect performance and scored 5-50, it still wouldn't have meant a lot.

“Yeah. There are things to work on. We brought on five subs today so we got some personnel to change it up a bit. The team has changed a bit since the league. It has been very competitive inside at training which is great. We might be a bit disappointed with the performance today and they will be looking to get back training and going well again.”

Full back Ciaran Burke was replaced early in the second half after struggling on Sligo's best player Gerard O'Kelly-Lynch and conceding two goals off him. The Durrow man had a brilliant league and Fennelly expects him to quickly bounce back.

“Ciaran, it wasn't one of his best days but that happens. He is playing in a pivotal position at full back and Gerard O'Kelly-Lynch is a good player. He is well able to play and he got one or two decent balls in there. Ciaran was in front for one or two and he just left it behind him but Ciaran is a great fellow. He had a great league campaign and I have no doubt he will be looking to get back again and hurling well again.”