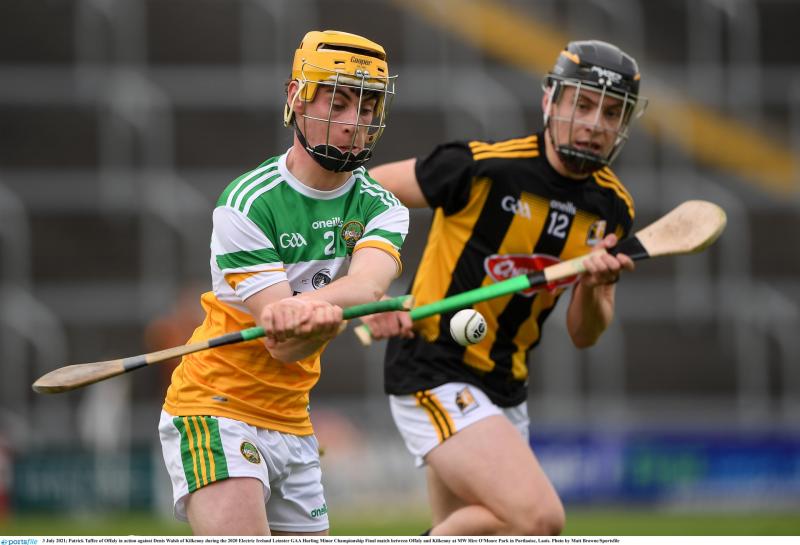 Offaly’s dream of landing a first Leinster minor title in 21 years (20 attempts) never got off the ground this afternoon at Portlaoise, as they were undone by an incredibly powerful and skilled Kilkenny display at O’Moore Park.

With the wind blowing into their faces in the opening 30 minutes, it was a case of try and hang in the game for Leo O’Connor’s men, who opened up by trading frees.

What followed was a lesson in every sector of the field, as despite incredible effort, Offaly simply couldn’t get a foothold in any part of the pitch and gradually slipped further and further adrift.

The old adage of “If life hands you lemons, make lemonade” was certainly taken to heart by Kilkenny here, particularly by starting full forward Gearóid Dunne. The big Tullaroan man was forced to drop back to centre back due to an early injury to Patrick Langton, and Dunne went on to put in a towering performance at the heart of the Cats’ defence, completely starving a highly-rated Offaly inside-forward line of possession while Kilkenny built their match-winning lead.

Time and space on the ball was impossible to find and Kilkenny robbed Offaly of possession time and again through hooks, blocks and incredibly physical hits. Cormac Egan and Quinn tried to break through the resolute Kilkenny half back line with some trademark runs, but they simply couldn’t break free and create the overlaps needed, while the direction and thought behind Kilkenny’s play was incredibly impressive.

Substitute Ted Dunne struck the game’s first point from play from a tight angle with his first touch after coming off the bench as a result of Langton’s injury, illustrating their depth and their range of scoring threat.

Eoin O’Brien and Harry Shine combined to set up another excellent score, and as Offaly were forced into tough tackles, Drennan picked off his frees and the lead became 0-6 to 0-1. That five-lead jumped to eight just before the water break with Shine slamming the ball to the net from close range, and already the task facing Offaly was gargantuan.

Billy Reid, Zach Bay Hammond, Joe Fitzpatrick all created a series of turnovers to set up Kilkenny attacks and some crisp finishing meant that the lead was at 12 points before Lochlann Quinn added Offaly’s second point from a 65.

Any brief flash of optimism for the Faithful County supporters didn’t last however as Denis Walsh made a superb run from the left wing and then slammed the ball to the net with a drop shot, firing the sliothar inside Mark Troy’s near post. A fine catch and finish from Luke Carey was followed up by another point from Quinn, but it was notable that just when it looked as if there might be something of an uprising, Gearóid Dunne was on hand to make a superb rob of the sliothar from an Offaly runner, and after he drove down the sideline and took a late hit, Billy Drennan had another simple dead ball opportunity.

A hard run from Cormac Egan set up Quinn for an Offaly goal, but with the scoreboard reading 2-13 to 1-4 at half time, it was hard to see any way that Kilkenny would be toppled from here.

The second half was a much more even contest, with the Offaly bench making a strong contribution. Rúairí Dunne added heft and drive to the half-back line, Adam Landy and Lee Hogan poached scores, and the underdogs kept chasing goals, chasing their dream. Carey fired in one from a penalty, Hogan whipped in another after collecting a breaking ball close to goal and getting his shot away in traffic, but Kilkenny kept finding scores as they needed them. Their power on the ball meant Offaly regularly conceded frees, with Drennan unerring, while Harry Shine also swung over a couple of superb scores to ensure there was never any huge cause for concern on the Kilkenny sideline, even once their lead was cut back to single figures.