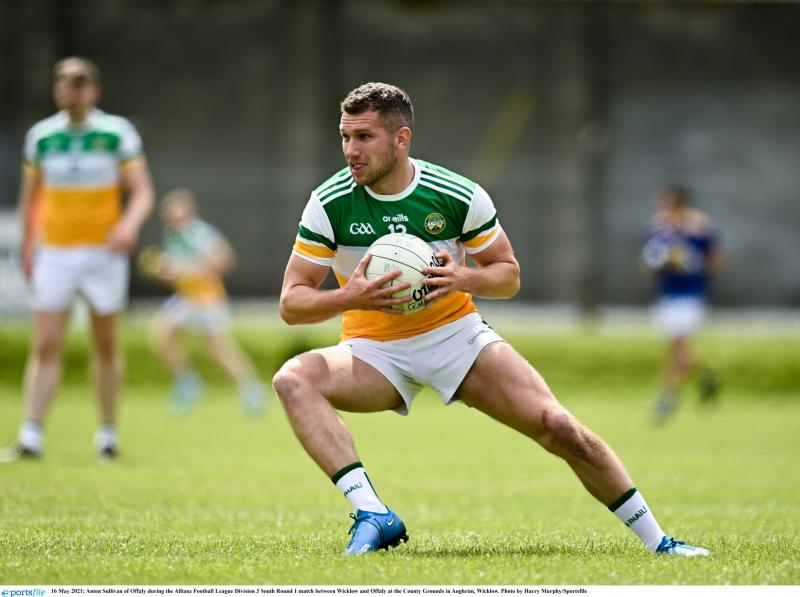 Offaly footballer Anton Sullivan has told JOE.ie's GAA Hour that there was "no hiding place" as the team's strength, conditioning and training ramped up under John Maughan.

Offaly won all of their league games this year, including a promotion play-off game against a tough Fermanagh outfit last weekend, but the Rhode man says the work was done long before they stepped over the white line on each of those occasions.

Offaly's football fortunes have undergone a renaissance of sorts under John Maughan with results steadily improving since he took over in 2018, culminating in promotion to Division 2 of the Allianz Football League. Next year will be the first time since 2002 Offaly compete in the Top 16 of football's league structure.

As much as philosophy and the John Maughan playbook is important, the hard yards on the training pitch as a collective and as individuals during the Covid-19 lockdown have hardened this Offaly outfit, which blends youth and experience to perfection. Rising star Cian Farrell playing alongside stalwart Niall McNamee, and Niall Darby marshalling a burgeoning rearguard, can only serve to drive standards.

Dermot's weekly reports drove the buy-in from players with Anton admitting, "there was no hiding place."

"Anyone who wasn't buying into it was gotten rid of."

"We did a lot of Zoom calls, worked on a lot of stuff, especially our own game. We were training ourselves. We had the work done then, our fitness levels were good and we really hit the ground running.

"We said to ourselves whichever team worked hardest during the lockdown would come out the best, and thankfully, we're reaping the rewards of this now," he added.

He said Offaly is emerging from the doldrums where in years gone by the team made headlines for "players walking away, managers not being up to scratch or the county board not buying into things."

He said life under Maughan now is about "buy-in from all of the players." Headlines around Offaly now are good with nine league wins from nine for the hurlers and footballers combined and investment in the underage structures from Shane Lowry.

Maughan's style is also playing a part with Colm Parkinson admitting that Offaly are now playing "a lovely brand of football." It is a style of letting the ball do the work and depending on players' speed and fitness to get away from their men and off the shoulder. It's old fashioned in a way but it is beating the new breed of blanket defence.

"You're told from a young age to get it, kick it, let the ball do the work and that's what we do," Anton told Wooly.

"We don't hesitate on the ball, we just try to move it quickly through the hands. We've pace in our team as well and get runners off the shoulder. That's the only way you'll beat these blanket defences," Anton said enthusiastically.

Offaly are not resting on their laurels and pushed to play the league final against Derry this weekend, relishing the chance to play for silverware in front of fans again at Croke Park.

"We would have been playing an A versus B match in training on Sunday anyway," Anton said as he reiterated that the decision to play the game was the right one. "All of the league finals from 1 to 4 should be going ahead," he added.

He said the players are firmly focused on Derry but that the "shackles are off." They will go out and play unbridled on Saturday evening before getting into preparation mode for their Leinster Championship opener against Louth on Sunday morning. That match takes place just eight days after Saturday's league decider.

The match is live on TG4 on Saturday evening for those not lucky enough to secure one of the 2,400 tickets available for the game.

Offaly veterans named on GAA teams of the week