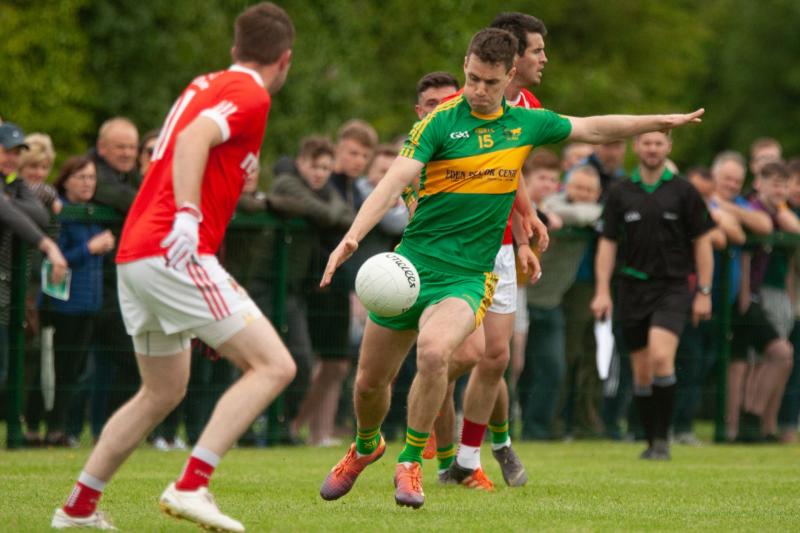 RHODE saw their championship life flash in front of their eyes before qualifying for another Senior Football Championship final as they got the better of Edenderry in an extra time dogfight that was not for the faint-hearted in Bord na Mona O'Connor Park.

It was a very relieved Rhode side that trudged off the field at the end of eighty minutes plus of gruelling tough football and they probably should have been beaten in normal time. It took an excellent score from Ruari McNamee with almost the last kick of the game over four minutes into injury time at the end of the sixty minutes to give them extra time and had the final whistle been blown before that, the championship favourites could not have complained one iota.

Just before that Jordan Hayes had caught a great mark for Edenderry and after the ball came back to him after his kick, he got bottled up in possession and Rhode mounted one desperate last attack. Moments earlier, Niall Darby had been wide with a scoreable free from 45 metres as Rhode stared a shock defeat full in the face but when the ball fell into Ruari McNamee's hands, he made no mistake from thirty metres to level it up at 0-11 each - Ruari McNamee scored three second half points and was one of Rhode's heroes on one of those days when it was all about honest endeavour and survival rather than true quality and great individual performances.

In extra time, Rhode were by far the better team and they seemed to have an edge in fitness as Edenderry ran out of steam and players began to show the effects of energy sapping football. The winners had first use of the wind in extra time and after Cian Farrell had given Edenderry the lead from a mark and Rhode had three fairly atrocious wides from Niall McNamee (free), Niall Darby and Anton Sullivan, they got the game's deciding score in the 9th minute, a Niall McNamee goal.

McNamee had been trying to win a mark but after dropping the ball, he latched onto it again, got clear and finished very well to the net. It was a strange afternoon for McNamee who has been the outstanding player in the championship to date. He started off very well, winning marks and looking like he would destroy Edenderry but then spent a prolonged spell as a peripheral figure on one of those rare Rhode off days. However, when the chance presented itself to him, he made no mistake and it gave Rhode a 1-11 to 0-12 lead at the end of the first period.

In the second period, Rhode finally began to play their best football and opened up daylight as three unanswered points gave them a 1-14 to 0-12 lead. Edenderry were never going to pull that in though they almost ensured a dramatic finish as first a long ball in was very close to being across the line before Ken Garry got it out and then Richie Dalton got the ball over the bar with a near open goal from five metres – Dalton was playing his first game of the year having opted out at the start of the season and he did well as an extra defender, sitting in front of Niall McNamee for most of it and doing the simple thing effectively.

While clearly the better side in extra time, this was not a good Rhode performance and they almost suffered a shock defeat. For much of the game, they didn't play with their usual energy levels and pace, their work rate was below customary levels while they got too defensive at times with players drifting all over the field as they lost their shape. Yet they won and it is the ability to win games on bad days that separates the really good sides from the pack. The county final against Ferbane or Tullamore will tell if this is the case for Rhode but having waltzed through the group stages in very impressive fashion, their first taste of knockout football raises all sorts of questions.

Edenderry had blown hot and cold in the group but they gave a really courageous performance, full of commitment and honesty. They also contributed to a less than memorable game but for them, it was all about stopping Rhode from opening up and the likes of Niall McNamee and Anton Sullivan running riots. They did this to a large extent through sheer will power and intent and they really should have got a famous victory in normal time.

They kept it tight, they kept it low scoring and they worked like dogs. It almost paid off with a famous victory as Rhode certainly played their get out of jail card in normal time. It is telling that many of the game's best individual performers wore red jerseys. Jordan Hayes was the game's stand out figure, running the show from midfield and spraying some quality ball around the place – it was unfortunate for him that he played an unwitting role in Rhode's crucial equaliser while he also had a couple of poor wides and passes in extra time but he was immense.

Rory Egan and Lee Pearson belied their young years with excellent defensive performances while Cian Farrell was the best forward on view. He won some crucial marks, popping them over the bar and the point he kicked to put Edenderry 0-11 to 0-10 up two minutes into injury time was worthy of winning any game – an audacious and stunning strike with the outside of his cultured left foot from near 45 metres out.

Yet Rhode won and that is a tribute to their resourcefulness and absolute refusal to surrender. Even when it was clear that they were in a dogfight and that they were struggling to play their normal football, they kept at it, they didn't panic and it paid off. That is what football is all about and they remain the team to beat in this year's championship, despite the doubts now floating around them.

On a day when some of their normal stalwarts found the going tough, players did step up to the mark. Jake Kavanagh won a lot of very good ball on their full back line while Eoin Rigney did a lot of tidying up in front of him. Dylan Kavanagh toiled honesty in a midfield zone where Edenderry posed the most serious of challenges while Ruari McNamee showed great opportunism in attack and Anton Sullivan's sheer will to win manifested itself as the evening wore on and he became increasingly influential.

Rhode also had three players coming off the bench to kick vital scores, Pauric Sullivan, Shane Lowry and Paul McPadden while Alan McNamee really made his presence felt at midfied when introduced.

Early on, it went on expected lines as Rhode tried to get in quick ball to Niall McNamee who took two points of two marks as they led by 0-3 to 0-1 after six minutes. Edenderry had first use of the wind and took a while to settle but once they got into the pace of the game, it was clear this was going to be no cake walk for Rhode. After a tentative start, Cian Farrell began to pose serious problems for James McPadden and he got two of the points, one mark, as Edenderry took the half time whistle leading by 0-6 to 0-5.

The second half was a real defensive battle and there was not much in the way of open football but it was all tremendously exciting as the possibility of a shock loomed large. Edenderry almost got a goal in the 39th minute when the hard working Stephen Guing scraped the top of the crossbar as he blasted at the net. That levelled it up at 0-7 each after Rhode had got their noses in front early in the second half.

A brilliant Cian Farrell point put Edenderry back in front but then David Moloney received a black card for hauling down Anton Sullivan. Rhode struggled to take advantage and when Farrell pointed a 53rd minute free to put Edenderry in front, Rhode were in the most critical of situations. However, in the two minutes before Moloney came back on, Rhode found an extra gear and three quick fire points from Niall Darby (free), Shane Lowry and Ruari McNamee edged them in front with four minutes left.

Edenderry, however, still had life in them. As Anton Sullivan kicked a couple of poor wides, Sean Doyle showed great composure to equalise with a scoreable but difficult free and then Cian Farrell got that sensational point. The drama and tension was incredible as Ruari McNamee rescued Rhode and they then pulled away in extra time.