“That standard we are talking about, that culture, has to start young and that feeds in”- Duignan 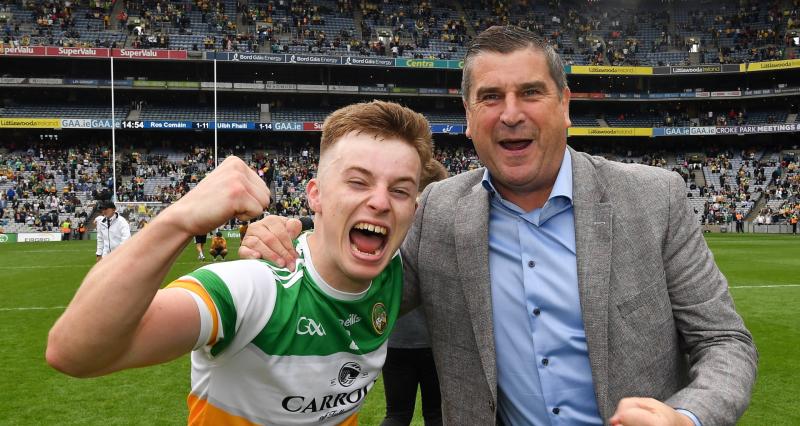 OFFALY GAA chairman Michael Duignan was certainly in no mood for backing down or hanging any individuals out to dry at the April meeting of the County Board as he offered a passionate defence of a recent controversial decision to drop four young players from a county U-14 football development squad.

The decision to drop the players after they missed a training session had generated national attention and plenty of adverse comment but Mr Duignan stressed that they were trying to change the “culture of Offaly GAA” and he said that their policy would not be changing.

While the four young players had missed the training session because they were playing a national U-14 soccer league quarter-final for Edenderry Town, Mr Duignan stressed that the decision had not been taken because they had played a soccer game. He said it was taken purely because they had missed a training session, that they expected full commitment from their players and they had no problem with players playing any other sport. He stated that they wanted young players to play other sports but if they wanted to be on a county squad, they had to give their full commitment to that and could not miss training over it.

While Rhode delegate John Kilmurray and St Brigid's Micheal Casey queried the decision, Mr Duignan was supported by other speakers and there was only a short discussion on it.

Mr Duignan dipped his toes into the controversy after an initial statement discussing disappointing results for Offaly's inter county teams in the past week. “It has been a very disappointing week and we all know that. There is no point in saying anything else,” he said, adding that the key to improving Offaly teams was by raising the standards at club level.

He urged clubs to get Games Promotion Officers appointed, acknowledging that the demands were tough as they focused on providing a year round club programme. He stressed that they will be sticking with this and it was crucial if they wished to make progress.

“If we want to improve in this county, we have to get the structures in place and we need discipline and commitment,” he remarked.

He then spoke about the recent decision to drop four players from the U-14 development squad. He revealed that 25 players had been dropped from county development squads this year for a variety of reasons.

“These four particular players were not dropped because they played soccer, they were dropped because they missed a session. We have plenty of players playing other sports and we encourage that. We have no problem with that but if the county squad is training on a Saturday or Sunday morning, we expect them to be there.”

Mr Duignan said that if they don't develop players fully from U-14 level onwards, they will be left behind other counties. He referred to Sunday's Leinster senior football defeat by Wexford, saying they should be able to win these matches and that is what they are trying to change in the future.

Rhode delegate John Kilmurray felt that the punishment for the missed training session could have been softer and they could have been suspended for a week or two instead of dropped. He named the brother of one of the dropped players and admitted that forms for missing training need to be “done properly but two wrongs don't make a right”. He suggested that if Director of Football and U-14 development squad manager, Declan Kelly had been “approached in the right way, we would not be in this position”.

“I agree 100% with what you are saying but it could have been handled differently,” Mr Kilmurray added.

Mr Duignan replied that he didn't agree him. “We are very happy with the development squad rules,” he said, stating that they had spent a lot of time drawing up a code of conduct. He said the rules were simple but the development squad system will not work if “we don't get the commitment”. He repeated again that the decision had “nothing to do with soccer” but if all parents could say their child was “unavailable, where would it stop?”

St Brigid's delegate Micheal Casey said U-14 was too young to be enforcing a strict code of conduct and asked had a parent rang to ask if the session in question could be changed.

Mr Duignan said that they had logged a request on February 9th to change the date of their super 7s competition, which took place before the development squads were picked. That competition went ahead as fixed, and he said they had no other call logged about a request to change the session that the players missed.

Mr Casey said the perception was that the players had been dropped because they played soccer.

Mr Duignan pointed out that the GAA now has a split season with the first half devoted to county activity and the second half for clubs. He said their requirement was that county development squad players make themselves available for one session a week for an hour and a half. “Yes they can play other sports but we want our county players on a Saturday or Sunday morning and we won't be devolving from that. If we don't take that stance, we will be left behind.”

Erin Rovers delegate Eamon Dunican said that the reaction of an 18-19 year old being dropped in this manner would be very different to a 12-13 year old.

Mr Duignan stated that the code of conduct was signed by the parents of all players in the development squads. He said the code of conduct could be reviewed at the end of the season but they were trying to change the culture of county players and raise standards. They couldn't afford to change from this.

Drumcullen delegate Peter Lyons stated that they should also consider the players who are still on development squads. “The rules work for them. We have to make difficult decisions,” he said, stating that they needed to develop county players.

Bracknagh delegate Dick Weldon supported the decision, stating that their aim was to make footballers for Offaly “not soccer players for Edenderry.”

Micheal Casey described them as an elite group of 12-14 players and asked could they afford to be without four of the best of them.

Michael Duignan: “They will have the opportunity to come in again but it hasn't worked for us in the past. How many lads have gone off and played other sports and come back and played for Offaly? The answer is none.”

Peter Lyons referred to Limerick senior hurling manager John Kiely talking about the “group culture” and he said this is why “Limerick are indestructible”.

“Every single person in that group are united and that has to filter down the line. That is where we have to get to. As you said at the start, you can play other sports and if you are a club player, you can play any sport but if you go to represent Offaly and I know it is only U-14, we have to start somewhere. There can't be exceptions made for a player or individual. That will undermine all the other fellows,” Mr Lyons added.

He spoke about the importance of monitoring players all the way up the line. “Fundamentally, it is about establishing a culture and what it means to wear an Offaly jersey. There has to be sacrifices. The boys are all disappointed this week with the bad losses but they have made huge sacrifices to get to where they are and that is why it hurts so much. Players down along the line for Offaly have to make the same sacrifices.”

Mr Duignan commented: “We all know this takes time. I would have spoken to John Kiely and Joe O'Connor, the s and c guy in Limerick. It takes five years work to bring a player to the standard he should be at. So if we start at 16, 17 or 18, we are too far behind. They are all starting much younger. We are not talking about lifting weights or anything like that but that movement, fitness levels, running style, we have to get that right. We have to get our skill levels up. I know these few lads and their parents are very disappointed but there will be an opportunity in the Summer for them. We take the point that they are only kids and how they are treated. We are all very conscious of that and we all have kids of our own but that standard we are talking about, that culture, has to start young and that feeds in. If we want to compete with those top counties and get back. . . . And that is our aspiration. There is no point in being here if everyone is happy with the week we have had.”

St Rynagh's hurling delegate Damien Martin said he would be worried about the other players on the panel and they should be talking about them.