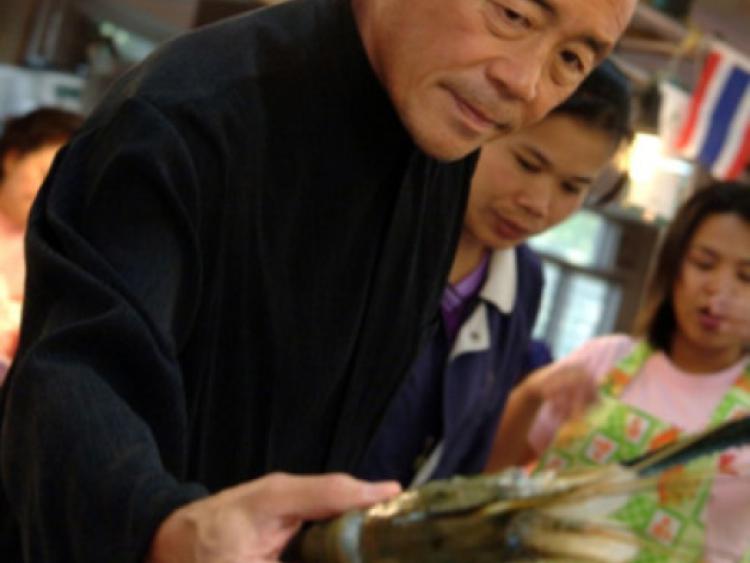 When Ken Hom visits the UK, there’s one souvenir he insists on stocking up on.

“They make the best Chinese sausages here. That’s what I’m carrying in my luggage,” the chef says over green tea in the ultra-plush Dorchester Hotel in London, his base when he’s in the UK capital.

“I get them in [London’s] Chinatown. They’re wind-dried sausages and I cook slices of them in rice, finished off with a fried egg. It’s like my mum’s cooking.”

The hugely successful cookery star has travelled the world with his work (and also has homes in Paris and the South of France), but it’s clear he hasn’t forgotten his roots.

Born in Arizona and raised in Chicago by his mother Ying Fong, a Chinese factory worker (Hom’s father died when he was a baby), he grew up “within a Chinese cocoon”.

“I definitely consider myself Chinese more than American. I didn’t speak English until I was six, and I lived in Chinatown until I was 20,” the softly-spoken chef says.

Hom began working at his uncle’s restaurant aged 11, and taught cookery before kick-starting his TV career - and introducing many people to Chinese food for the first time - with the 1984 BBC show Ken Hom’s Chinese Cookery.

Along with his presenting career, there have been numerous cookbooks, a wok and accessory range, high-profile consultancy work and a ready meal collaboration with Tesco.

The busy 65-year-old - who was successfully treated for prostate cancer in 2010 - will be taking a break, however, to celebrate Chinese New Year on February 19.

“I’ve been coming to the UK for almost 30 years to celebrate it. I usually have a Chinese New Year party and I go and eat with lots of friends,” he says. “It’s an excuse to eat and have a good time.”

When he’s hosting his own dinner parties, he keeps things simple.

“I usually make no more than two dishes, and I have lots of wine and champagne. That’s the secret!” he adds with a glint in his eye.

“When people are planning for a dinner party, they make complicated things, they get all stressed out. I say never make a dish you’ve never made before. Make a tried and true dish you know you can do.”

It’s seems unlikely that this calm and measured chef has ever found himself in a flap in the kitchen.

“I’m relaxed all the time,” he admits, smiling. “I’m not working; I’m cooking. I find it quite relaxing. I have a big kitchen and a table that seats 14 people, and nothing’s more pleasurable to cook for than a group of friends. Food is a uniting force.”

Here’s a Hom recipe to celebrate the Year of the Goat.

Pierce the rind side of pork with a sharp fork or knife until the skin is covered with fine holes.

Insert a meat hook into the meat to secure it.

Bring a pot of water to a boil, and using a large ladle, pour the hot water over the rind side of the pork several times. Set the pork belly aside.

When it is warm enough to handle, rub this mixture onto the flesh side of the pork.

Hang the meat to dry for eight hours or overnight in a cool place or in front of a fan.

Remove and allow the pork to cool. Then carve it into bite-size pieces, arrange on a platter, and serve.