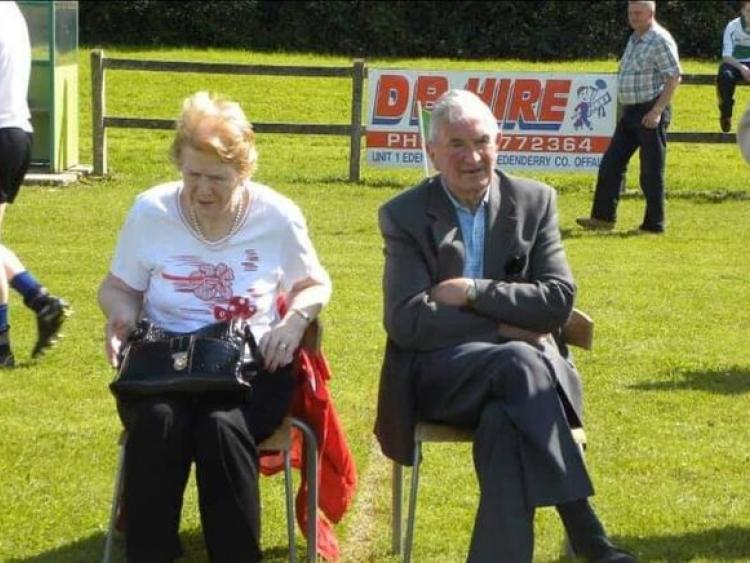 THERE was sad news on Sunday with the death of Maurice Coffey. Maurice lived at Ballymorane, Edenderry and was synonymous with the Ballyfore area.

He was a passionate GAA supporter with an infectious enthusiasm for football. He played football with his native Ballinabrackey in his youth and gave vast service to Ballyfore GAA Club after moving into the area. He served the club in a variety of roles as an officer, worker and mentor. He was president of Ballyfore GAA and a trustee at the time of his death.

Maurice and his beloved wife, Kathleen reared a tremendous footballing family. Tom was the best of them, winning an All Ireland u21 medal with Offaly in 1988 and Leinster SFC and National Football League titles in 1997 and 1998 before becoming a successful manager who also took charge of Offaly seniors and u21s along with various club sides inside and outside the county. David was an excellent midfielder in the 1990s and played for Offaly seniors for two seasons in 1994 and 1995. Kevin and Maurice jnr were also very good players. Kevin was a very accurate forward (he finished a long club career in goals), Maurice a rock steady defender and they played for Offaly at different levels. Ray played for Ballyfore and Offaly Vocational Schools but emigration to Australia ended his career at home. Maurice also leaves behind a daughter Martina, six brothers and two sisters.

Ballyfore had their most successful spell in the 1990s when they won junior and intermediate titles. They won their only junior title in 1990 and two years later, they won a famous intermediate football title. They survived a tremendous battle against St Saran's (now Belmont) with the late Shane Ryan missing a last gasp penalty for the losers – Sean Evans, a hero for Offaly's All-Ireland winning sides in 1971 and 1972, saved that dramatic penalty.

Ballyfore held their own at senior level for a few years and only a late Tony Kenny goal denied them a famous victory over their great parish neighbours, Edenderry at one stage. A rural club with a small pick, Ballyfore couldn't survive in the top flight and it was not long before they slipped back down the ranks. They won the intermediate in 2001 but have gone into freefall in recent years and they are now in junior “B”. The 1990s were mighty years for Ballyfore and they were essentially a family affair with two families, the Coffey's and Evans' backboning the team – there were of course many other players and individuals who made great contributions and without them Ballyfore could not have been successful.

Maurice was very proud of their achievements and Offaly's as well. He was an ever present at games and his passion for the GAA oozed out of him. He was a quiet and contained but occasionally vociferous supporter. He was a dignified man but you always knew which team he was supporting when he was at a game!

Ballyfore's decline co incided with the transfer of Tom Coffey to Rhode and the later one of David to Birr, though it would have happened anyway. The Coffey's were a great and proud Ballyfore family. David continued to travel up from his Birr home for several years after moving there and Tom was in the veteran stages of his career when he moved – Tom later went back to manage Ballyfore - while they also lost others.

Maurice was a proud family man and continued to follow his sons but he remained a Ballyfore man at heart and continued to support them. He served on the club committee for several years and he could always be relied on to help out. He frequently did umpire when called upon at games and in a social media post on Sunday, Ballyfore GAA Club joked that they never had to worry about a 50/50 call going against them when he was on the post!

He was excellent company and it was always a pleasure to meet and chat him. He was a sociable character. He enjoyed life and he was a very good singer – his songs were a memorable part of Ballyfore's celebrations over the years.

He was a friendly man and his likeable persona drew people to him. He ran a successful land drainage contracting company from his home at Ballymorane, Edenderry and was a generous sponsor of Ballyfore and Offaly GAA as well as other clubs.

He leaves a great collection of treasured memories and will be sadly missed by all who knew and admired him.

Due to the current Covid-19 restrictions there will be a family funeral Tuesday at 12 o'clock in St Mary's Church, Edenderry followed by burial in St Mary's Cemetery.