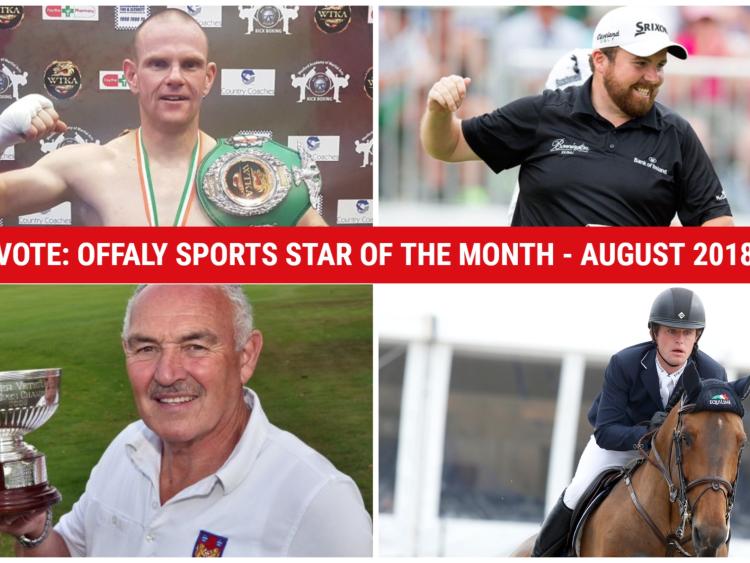 VOTE: Choose the Offaly Sports Star of the Month for August 2018

It's been another bumper month for Offaly sport and we have assembled a cast of 11 nominees to battle it out for the crown of Offaly Sports Star of the Month for August, sponsored by Guy Clothing.
We have everything from a Puc Fada winner to a Galway Races winner; a kickboxing champion to a Dublin Horse Show champion. Now, it is over to you, the Offaly Express readers, to decide the winner.
Here are our nominees:
Snugsborough Benny (racehorse) - A sporting star of the equine form makes our shortlist this month having given his Offaly owner and breeder a big win at the recent Galway Races Festival. Owned and bred by Ray Loughnane in Shinrone, Snugsborough Benny won the Guinness Galway Blazers Handicap Chase, seeing off A Rated and Mine Now by over a length, and the rest of the field by over 17 lengths.

Bill Donlon (golfer) - Birr's Bill Donlon won the Veterans Trophy (Over 65) at the 2018 Leinster Seniors Amateur Open Championship. The Championship was staged at Luttrellstown Golf Club this week. Two birdies in his last three holes helped the Birr man to victory after a staggering second round where he took a full 13 shots less than he did in round one. Bill has previously represented Ireland in the Senior Home Internationals and among his other notable victories was the Rose Bowl at the Irish Seniors Close Championship in 2017.

Roisin Ennis (footballer) - Offaly's intermediate footballers held on to their status at the grade in a playoff with Fermanagh in August. Although the team hit six goals and prevailed easily, the game will be noted for the contribution of some of the younger players. One player, in particular, catching the eye and earning her this nomination was Roisin Ennis who chipped in with four points from play in a complete Offaly performance.

Shane Lowry (golfer) - Lowry endured a tough month in August as he lost his PGA Tour Card but he showed flashes of brilliance as he finished in the Top 12 at the final major of the year, the US PGA Championship. Despite the disappointing end to his summer, that performance will live long in the memory, not least because he had his brother Alan acting as his caddy.

Darragh Kenny (showjumper) -  Offaly's Darragh Kenny enjoyed success at this year's Stena Line Dublin Horse Show at the RDS in Ballsbridge. He claimed victory in the opening day feature, the Sport Ireland Classic onboard Balou Du Reventon. They were among a massive 19 combinations who jumped clear in the opening round but he took the winners prize with a clear in 35.83 seconds in the jump-off. Along with his win in the Sport Ireland Classic, Darragh Kenny also chalked up two runner-up finishes in separate events on the same day.

Cian Farrell (Edenderry GAA) - Despite Edenderry missing out on one of the automatic semi-final spots in this year's Senior Football Championship, their forward Cian Farrell caught the eye with a number of impressive personal displays. He scored in games against Ferbane, Clara and Rhode, particularly catching the eye with three stellar points from play against the Reds' neighbours in green and gold. Farrell was a star with the Offaly U20s this summer and seems to be the next of Edenderry's young guns to make the step up to senior level, perhaps under new manager John Maughan.

Cillian Kiely (hurler) - Offaly's Cillian Kiely claimed the M Donnelly All Ireland Pic Fada Senior crown in the Cooley Mountains in August. A previous two-time winner at Under 16 level, the Kilcormac/Killoughey club man completed the course with 48 pucks to earn the title on the Annaverna mountain, taking on the likes of stalwart champion Brendan Cummins from Tipperary.

Laura Dolan (athlete) - The Ferbane A.C athlete added two medals at the Irish Senior Track and Field Championships in August. A former AIT Athlete of the year and Irish Junior and U23 champion, Laura excelled at the games, winning silver in the 28lbs weight for distance and bronze in the javelin. She was the only Offaly athlete to get on the podium at the championships.

The voting remains open until 11pm on Sunday, August 9 with our winner being announced on Monday morning. The winner will receive a specially commissioned glass trophy from sponsors Guy Clothing and will also go forward as a contender in the Offaly Sports Star of the Year Award vote at the end of the year.