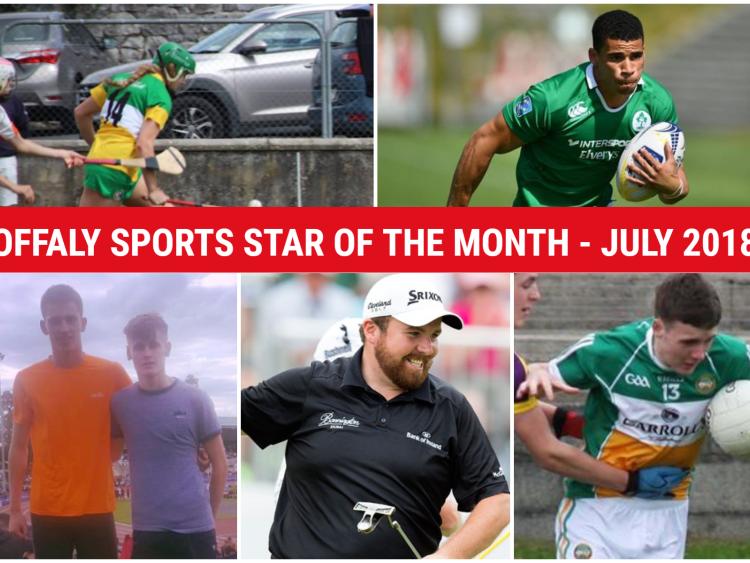 VOTE NOW: Choose the Offaly Sports Star of the Month for July 2018

It's been another brilliant month of sport for Offaly with major successes on the national and international scene, in everything from Rugby 7s to showjumping.

We have compiled a list of ten excellent and worthy nominees for you to choose from in our poll to crown the Offaly Sports Star of the Month for July 2018, sponsored by Guy Clothing, Tullamore.

Read also: 10 names for Offaly to consider for the senior football manager's job

The voting remains open until this Sunday, August 12 at 11pm with the winner being announced on Monday morning. The winner will win a specially commissioned glass trophy courtesy of sponsors Guy Clothing and will go forward as the July winner in the overall Offaly Sports Star of the Year vote at the end of the year.

Here are our nominees for the July award:

Ellen Regan - Ellen has been in inspirational form this summer with some spectacular performances in the All-Ireland U-16B Camogie Championship, including a 2-7 personal haul against Kildare and 1-7 against Armagh recently. Offaly now play Antrim in the All-Ireland semi-final on August 12.

Aaron Mangan and Mark Milner - These two Tullamore Harriers athletes are nominated jointly as they both brought the blue and white silks to the national stage in the Senior Men's Final of the 800m. Mark Milner ran a new PB of 1:51:6 to qualify while Aaron Mangan, at just 17 years old, sealed his final spot with a times of 1:54. They both ran in the final on RTE television against eventual winner and Olympian Mark English.

Oisin Rice - Tullamore Oisin Rice scored six points in Ireland's bronze medal match at the FIBA European Basketball Championships. He was a key figure in the team's run to the semi-final and their ultimate third-place playoff win. He had hit doubel figures in the scoring stakes against Moldova as Ireland booked their semi-final spot.

Shane Lowry - Despite a bitterly disappointing performance at the Open in Carnoustie, which culminated in the Clara man parting company with his caddy, Shane showed his resolve to finish 12th at the Canadian Open with his brother on the bag. He finished 15th in the Barracuda Championship a week later as he bids for a strong finish to the season on the PGA Tour.

Cian Johnson - Cian was on the scoring trail again as Ferbane pushed champions Rhode to the pin of their collar in a championship draw in July. The young Offaly sharpshooter made headlines in particular for his audacious outside-of-the-foot point from the sideline in O'Connor Park.

Ava O'Connor -  The Tullamore Harriers athlete had success on both sides of the Irish Sea in July. First, she finished fifth in the U17 1500m  in the Schools International Track & Field tournament in Scotland, an event she is eligible for in 2019 and 2020. She then came home and finished second in the Girls U16 1500m at the  Irish Life Health National Track & Field Juvenile Championships.

Cormac Delaney - Delaney helped Clara's U17 hurlers to a 2-21 to 0-12 win over Kinnitty/Lusmagh in the U17 Hurling Championship by scoring a remarkable 2-17 of their total. 2-6 of that came from open play in a commanding and genuinely attention-grabbing display. His accuracy led to him popping over 0-11 in frees, while his power, pace and undeniable confidence secured him the rest.

Jordan Conroy - The Tullamore speedster was once again grabbing headlines as part of the Irish Rugby 7s side in July. His outrageous acceleration allowed him help himself to a hat-trick against a highly fancied Kenya side, following that showing with another beautiful try against Wales. A head injury cut his Challenge Trophy final short but he helped Ireland to ninth overall at the Rugby Sevens World Cup.

Darragh Kenny - Offaly's Darragh Kenny played his part in helping Ireland through a brilliant second round comeback to finish as runners-up after a thrilling Mercedes-Benz Nations Cup on Thursday, July 19 at Aachen in Germany. He also pocketed €100,000 after finishing fourth in one of the world’s most prestigious competitions – the €1 Million Aachen Rolex Grand Prix in Germany.

Aoife Walsh - Aoife has been exceptional for the Offaly Junior Camogie team on their run to the All-Ireland semi-final. The Naomh Brid sharpshooter is deadly accurate on placed balls and has proved her influence throughout the championship this summer. She overcame the heartache of a one-point loss to Limerick early in July to bury a last minute free against Clare a week later. Her total of 0-6 that day proved the difference while she was also instrumental as the team beat Kerry last weekend to set up a semi-final tilt.