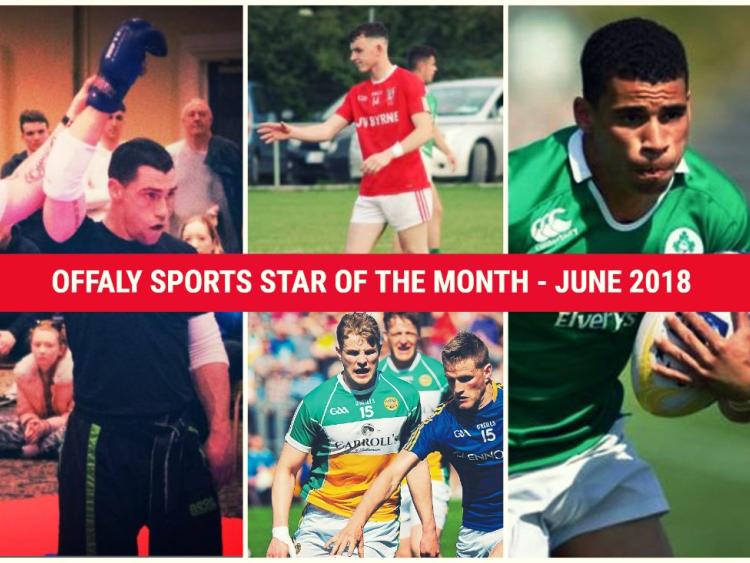 June was a fantastic month for Offaly sport with a Tullamore Harriers claiming a national title and our U20 footballers going all the way to a Leinster semi-final.

From archery to kickboxing, we have a wide array of nominees this month after Offaly athletes shone on the local, national and international stage.

We have compiled a shortlist of nominees and it's now over to you to crown the Offaly Express/Guy Clothing Sports Star of the Month for June 2018.

The winner will receive a specially commissioned glass trophy from our proud sponsors, Guy Clothing in Tullamore and go forward as the June winner in the ultimate Offaly Sports Star of the Year award for 2018 at the end of the year.

These are our nominees for the award for June:

Tullamore Harriers U20 4x400 Relay Team - Philip King, Aaron Mangan, James Dunne and Mark Milner won the U20 All-Ireland Championships in June. They won with a time of 3.28.44, well ahead of their competitors. They became the first Tullamore relay team to win this event in 30 years.

Jay Daniels - Although from Kildare, Jay Daniels was representing Edenderry’s Team Hurricane, where is is club sensai, when he became the Kickboxing Ireland (KBI) -69 Kg senior national champion at Breaffy House Resort in Mayo in June. Jay now has nine national titles to his ever growing list of achievements in the martial arts world.

Cian Farrell - One of Edenderry's rising stars was in serious scoring form for the Offaly U20s in June as they made it all the way to the Leinster semi-final. He scored 0-8 against Westmeath in the quarter-final, and nabbed 1-6 in the earlier win over Louth at O'Connor Park.

Johnny Moloney - Tullamore club man Johnny Moloney returned to the Offaly senior football fold upon the appointment of Paul Rouse as interim manager and he was instrumental during the All-Ireland qualifer series. He was inpirational in midfield early in the Round 1 win over Antrim, eventually moving into the inside forward line to score 0-4 from play. He repeated that feat, also scoring 0-4, in Offaly's agonising defeat to Clare in Round 2.

Cillian Sampson - One of the real stars of Offaly's minro hurling season, Sampson shone brightest in the county's quarter-final victory, scoring 2-5 from play. He went on to be voted the Electric Ireland Minor Hurler of the Week for that performance, seeing off competition from Kilkenny and Cork's finest.

Ryan Dunne - As one of the youngest athletes on Team Leinster for the recent Special Olympics Ireland Games, Tullamore's Ryan Dunne was a brilliant winner of a gold medal in the standing long jump event. At just 10 years of age, Ryan has having his first games and proved himself to be a class act.

Jordan Conroy - Tullamore native Jordan Conroy made headlines around the world over the June Bank Holiday weekend as he scored eight tries and helped Ireland to a shock third spot in the London 7s rugby event. Having lost their semi-final to eventual winner Fiji, Ireland pulled off a shock as they beat England in the third-place playoff game with Conroy going over for a hat-trick of tries.