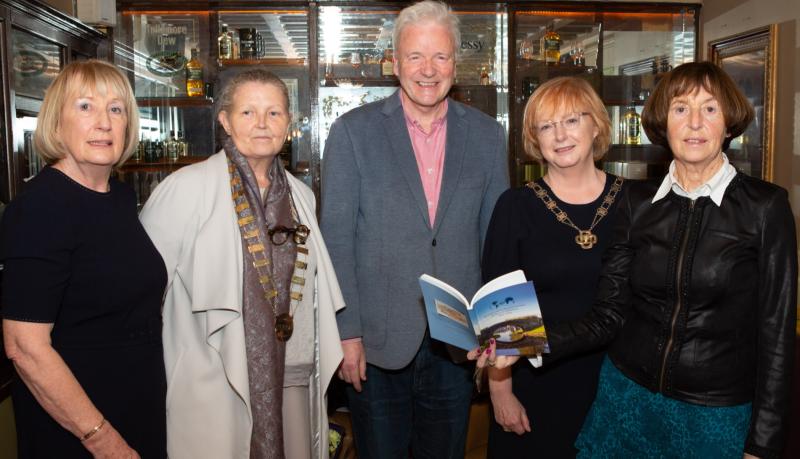 Tullamore Business and Professional Women's club, founded in 1971 in a very different Ireland, celebrates its fiftieth birthday this year with the publication of a history outlining the activities and personalities associated with the club in that period.

The club over the years   has  invited over 300 well know and influential people from the world of politics, the arts, health and the environment to speak at meetings which provided  opportunities for members  to hear different views, widen horizons and provide lively debate

With messages from Anu Viks, BPW European Regional Coordinator and National President, Moyra  McMahon, chapters dedicated to each of the five decades and articles by members of the Club, the 130 page book, edited by Dymphna Bracken,  a past president,  is an excellent overview of  the progress of women in leadership and business over the period.

The history written in decades gives an account of the experiences of women in Irish society commencing in the seventies  when women were legally obliged to give up their jobs on marriage to the era of Ireland’s first female President Mary Robinson in the 1990’s and to the 2000’s when  the club was address by many local  women who were then leaders in their chosen fields  including Yvonne Farrell, Director of Grafton Architects; Judge Bernadette Owens,  Fiona Mitchell, London Correspondent RTE; Emily O’Reilly, European Ombusman; Marcella Corcoran Kennedy, the County’s  first female Junior Minister in government; Anna May McHugh, Director of the National Ploughing Association and Ms Colette Byrne, the first female County Manager Offaly County Council.

Among those in attendance at the launch on Thursday afternoon last were Moyra McMahon, National President BPW Ireland, Fiona Mitchell RTE, members of BPW Galway and current and former members of the Tullamore Club.

President, Bernie Henry said she was delighted to have been part of BPW Tullamore’s journey to its 50 anniversary.

“BPW has added an exciting dimension to the lives of many in the town and in the neighbouring hinterlands.

She thanked the Editorial Committee; Dymphna Bracken, Editor, Dr Jean Durkin and Mary Wrafter  and all the members of the club whose hard work and contributions made this 50th  anniversary book happen.

Dymphna Bracken, Editor, said one of the most interesting aspects in researching the book was the dramatic shift in the role of women in Irish society over the past 50 years with more females participating in the workforce and more in leadership roles.

“One of the unique aspects of the club over the years was that it offered the opportunity to members and others to hear national and knowledgeable speakers on a diverse range of topics including business, health, culture and political in a very changing Ireland”

“The range of speakers indicates the subjects of topical interest at the time while some are no longer of interest others are still dominating the headlines to day.

“Interesting to see how the social media information age will change that dynamic in the future with the growth of new media and opportunities for different channels of communication,” she concluded.

Launching the book, Michael Byrne said it was an honour to be asked to launch you fiftieth anniversary publication to mark your contribution to Tullamore and to Ireland.

“Anniversaries such as this in the life of a club are long enough ago to provide an opportunity for reflection, celebration and renewal,” he stressed.

He added: “Reflection is probably something that we do not do enough of and yet, when looking back on the way things were in 1971, a few may have regrets but most people would be pleased at the progress made in the period since the 1970s. The seventies decade in Tullamore saw the awakening of civil society in earnest. The Lemass era, from 1959, ushered in substantial changes in Ireland, not least in Tullamore, where we had the founding of the Tullamore Credit Union in 1963 (with the active support of local clergy) and the appointment of an all-male board.

“The opening of supermarket shopping, the closure of the old bar/grocery and the opening of lounges, which in turn saw women able to leave the snug. It was the era of Irish television, more electrical goods, free education at second level and higher education grants.

“Out of all this change came independent-minded people able to start new organisations in Tullamore such as Junior Chamber, revive the Chamber of Commerce, found a Lions Club and, in 1971, a Tullamore branch of Business and Professional Women (Tullamore BPW hereafter). The credit union, Lions, Junior Chamber and Tullamore BPW all sprung from national and international federations and did not involve clerical guidance or management. This was new.”

The founding of Tullamore BPW in 1971 can rightly be celebrated for the quality of its leadership and informed public debate, stressed the local historian.

“ It is not surprising that the first president (and a National President of BPW) was none other than Dr Breda Scanlon, the ideal role model, who was a free-spirited woman from the west while also deeply religious and caring. Ten year after Dr Breda it was the turn of Caren Farrell, who was the first woman solicitor to practise in County Offaly on a regular basis. ICaren Farrell was followed by Mary Ward who joined her father, Michael Ward, in his Edenderry office in 1977

“Much changed in the 1970s and here state organisations, such as the new health boards from 1971-2, provided new job opportunities and here I must mention Kathleen Broderick, one of your founding members (who also served as President Tullamore BPW and National Secretary), who was at the coalface in providing training in food preparation and household management where it mattered most for those in need of it.

Ms Mary Wrafter, Club Secretary thanked everybody associated with the publication, Michael Byrne for performing the launch and those who travelled to the launch.

The book is available for purchase from Midland Books, High Street and from members of the committee.

Covid-19 outbreaks in 'every prison' in Ireland hitting court cases