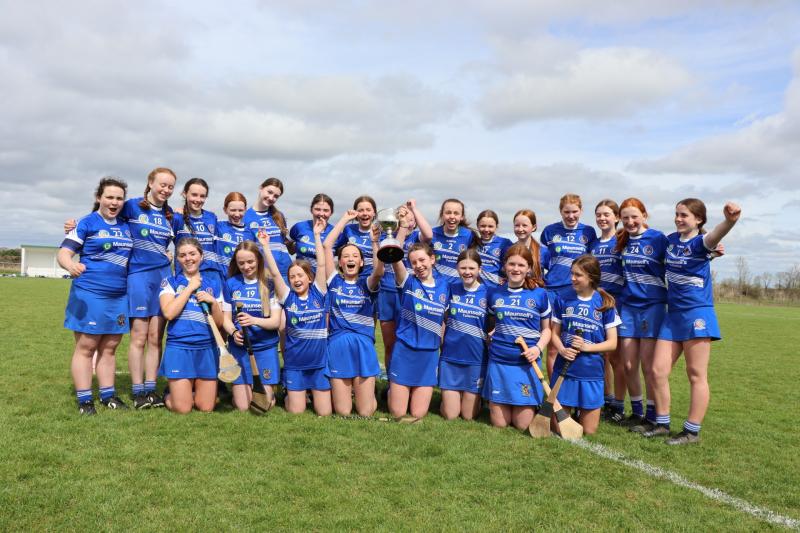 The St Rynagh's team that won the Feile B Final on Saturday (Photo by John Gavin).

This year's Feile na nGael proved to be an excellent festival of camogie on Good Friday with the Feile A teams playing in Ferbane while the B group played in Banagher.

With five clubs playing round robin games at each venue, it was Tullamore that emerged unbeaten in Ferbane resulting in them taking on Kilcormac/Killoughey in the A Final while St Cillians won 4 out of 4 in Banagher to play St Rynaghs in the B Final.

The finals were played in Crinkle on Saturday morning with St Cillians and St Rynaghs playing first in what was a fantastic game.  In the early stages, St Cillian's were dominant but were unable to convert their possession into scores and initially St Rynagh's off a couple of scores on the break.  St Cillians were then presented with a goal opportunity that they were unable to convert and Rynaghs went on to extend their lead to leave the scoreboard reading 1-3 to 0-0 at half time

St Cillian's managed to pick off some scores in the second half but they were unable to pull in the Rynaghs lead and the Shannonsiders ran out victors with the final score showing 1-4 to 0-3 at full time.

Kilcormac/Killoughey continued to battle for every ball in the second half but similar to the preceding final, they were unable to rein in the lead from the first half to leave retaining the Feile title they won in 2021.