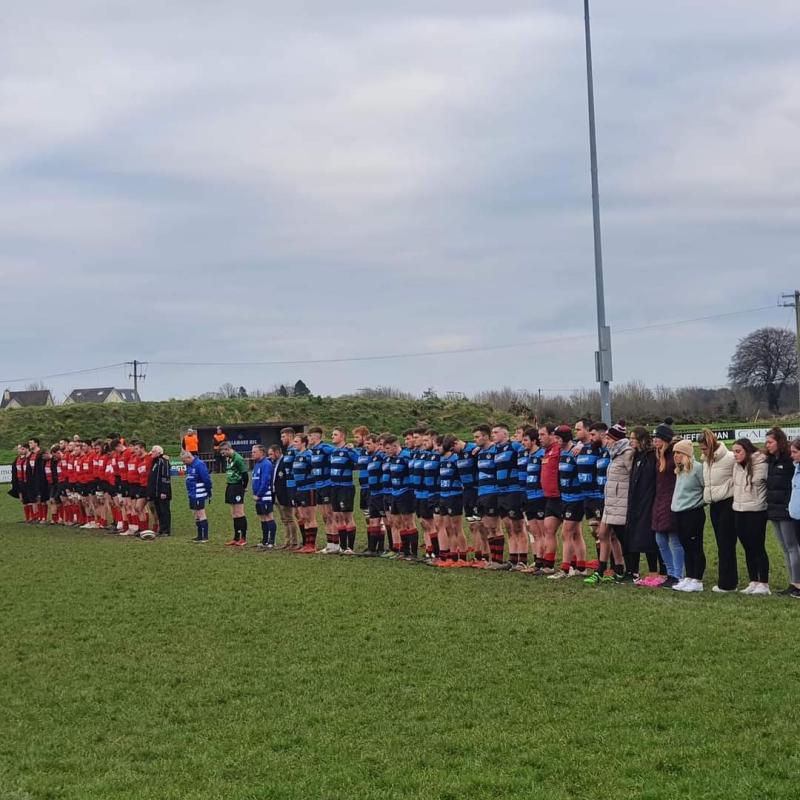 Tullamore bounced back with a brilliant win against a well fancied Midleton side at the weekend. Tullamore lost to Midleton away by 13 points before the Christmas break. This narrowed the gap between Midleton (5th) and Tullamore (4th) to 2 points. The group had a lot of time to digest the result, and worked hard over the break knowing the importance of the return fixture.

Tullamore started the game in the ascendancy, and dominated possession in the early exchanges. Young guns Chris Whittle and Conor Kelly made some excellent carries to gain crucial ground, while Sam Burns put the visiting back three under severe pressure with clever kicks to pin the men from Cork deep into the 22. Tullamore turned the ball over here and continued to hammer at the line. Burns flung the ball to Craig Strong, who ran at the defence and whipped it to Brian Geraghty. Brian picked an excellent line to carve his way through the defence and dotted down for a brilliant try to kick start the game. Karl Dunne added the extras to leave the score at 7-0.

Tullamore worked their way again up the pitch, and used their dominant scrum as an attacking platform. Karl Dunne received the ball and pulled it back to Craig Strong, Strong then dummied the pass and made a brilliant break down the middle of the pitch. Midleton were adjudged to have tackled high in this play. Karl Dunne nailed the penalty from 30 metres out to stretch the lead to 10 points. Just before the water break, Tullamore edged up the field once more with lung busting runs by Barry Bracken and Matthew Murphy. Tullamore then won a scrum penalty near the 22 metre line on the land hand side of the pitch. Karl Dunne slotted home another penalty to leave the score at 13-0.

The momentum shifted greatly after the water break, and Midleton had the lion's share of possession. The Cork men rattled off a converted try and penalty in this period, and could have scored more only for some brilliant last stitch defending from Ciaran Ennis and crucial turnover penalties from Cathal Feighery. The game became very attritional in the second half, and chances were scarce. The majority of the play was carried in the middle third of the pitch,

The game shot back into life in the last quarter. Tullamore were awarded a lineout in the Midleton half, and immediately set up a maul. The maul began to drive and rolled down the field at a blistering pace, Mark Kennedy then ran from behind the maul, and levelled two defenders to the ground in the process. The ball was then whipped to Karl Dunne, Dunne saw space in the wide channel and hit a perfectly weighted cross field kick to Cathal Farrell. Cathal showed a clean pair of heels and sailed in for a brilliant team try. Tullamore held strong in the last 5 minutes to hold on to win the game by 18-10.

Midleton failed to get a bonus point as a result, and Tullamore lengthened the margin to 6 points between 4th and 5th place. The team all showed great character and guile to win the game. Conor Kelly, Mark Kennedy, Ciaran Ennis and Chris Whittle had excellent games in the pack, while Cathal Farrell and the midfield trio of Strong, Dunne and Geraghty all gave great accounts of themselves. Cathal Feighery received the man of the match award for his several turnovers at ruck time, his expert line out throws and his all round brilliant performance in the game.

The men from Spollenstown will travel to Clonmel this Saturday for a 2.30pm kick off in the next round of the All I reland League. T

he Senior Men from Tullamore and Midleton, the Senior women and supporters all gathered for a minutes silence before kick off to remember the life of Ashling Murphy, who was tragically taken away from us far too soon. It was a poignant moment and one that was beautifully organised by the Senior team manager Shane Brennan. Our thoughts and prayers are with her family during this very sad and testing time.