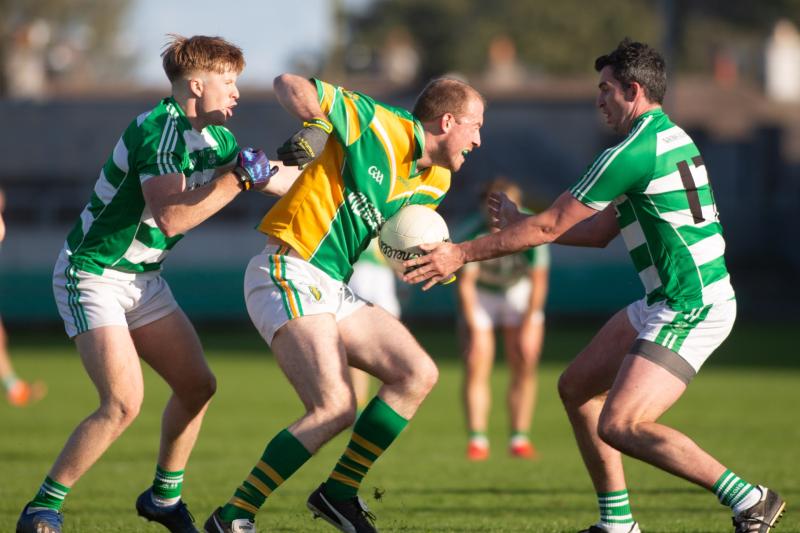 K/K are out of the race for intermediate football honours

THE Tullamore Court Hotel Intermdiate Football Championship is shaping up to be the most wide open of all the Offaly GAA competitions.

Group 1 is partiucularly delicately poised with all four teams on two points while in group 2, the big talking point is the early elimination of last year's beaten finalists, Kilcormac-Killoughey with Daingean in the semi-finals and Clonbullogue and St Brigid's assured of quarter-finals.

The second round of games took place last weekend and in group 1, there were hugely important wins for the first round losers. Ballycommon got their campaign up and running with a fine 3-13 to 1-12 win over Clodiagh Gaels while Raheen had a super 3-14 to 0-15 win over a fancied Shannonbridge.

It leaves the four sides tied on two points each and the scoring difference is: Raheen +7; Ballycommon +6; Clodiagh Gaels -6; Shannonbridge -7.

The top team in each group goes into the semi-finals with the next two into two quarter-finals. The final round on the weekend of September 18-19 will determine all and it is knockout fare for every team now. Raheen meet Ballycommon and Shannonbridge take on Clodiagh Gaels in the final round.

In group 2, Daingean had a great 0-20 to 1-15 win over Clonbullogue. Daingean were promoted from junior last year while Clonbullogue looked very good in their first round win over Kilcormac-Killoughey and this was a big win for Daingean. It also puts them into the semi-finals as they have four points from their two games. If Daingean lose to Kilcormac-Killoughey in their last game, the winners of Clonbullogue and St Brigid's will join them on four points. However, Daingean have beaten both and will top the group on the head to head rule.

Kilcormac-Killoughey have struggled badly. Well beaten by Clonbullogue, they shipped another heavy defeat as St Brigid's defeated them by 0-13 to 0-3. They are performances that suggest K-K are not too bothered about football this year and they are now gone from the championship, facing into the relegation play off.

Clonbullogue and St Brigid's are on two points each – they have the same scoring difference of +8 but Clonbullogue have scored more and are ahead on the table at the moment.

In the final round, K-K meet Daingean and Clonbullogue take on St Brigid's. Even if K/K beat Daingean, they can't get through – they can tie with the losers of Clonbullogue and St Brigid's on two points but they have lost to both them and will be gone under the head to head rule.

Carroll hopes to return to county squad after return from Australia