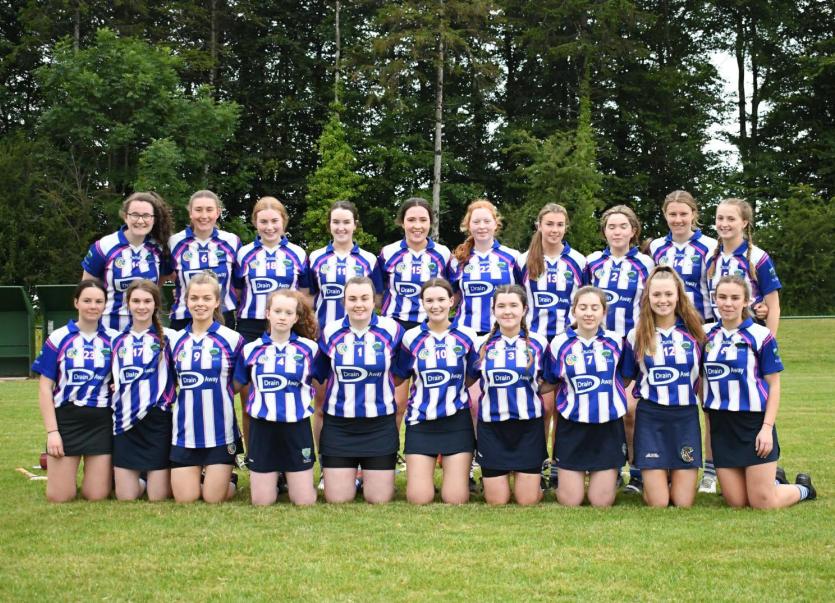 While the 2020 Minor A Final had started in Rath, very soon afterwards, the St Rynagh's and St Cillian's teams were meeting in Moystown in the B Final decider.  It was expected to be a close encounter and apart from a breeze that was blowing the stage was set for a good competitive game of camogie

St Cillian's started the game sharper with their first point coming from Roisin Pinches after a pass from Caoimhe O’Donovan and almost immediately after they followed it up with a goal. Sarah Freeman followed added to it with a great point from play before Niamh Costello hit over from a 45.  A shell shocked St Rynagh's opened their account after 10 minutes when Amy O’Sullivan hit over from a free with the teams then then traded points to close out the first quarter to leave St Cillian's leading 1-4 to 0-2.

St Rynagh's opened the scoring after the break when O’Sullivan pointed from a placed ball.  Soon after, Caoimhe O’Donovan, one of the youngest players on the St Cillian’s team, stormed through the St Rynagh's defence to hit a fantastic point to show the class of this St Cillians team,

Then it was the goalkeepers that took centre stage when Holly Boylan made a fantastic save from a Sarah Freeman attack and immediately after Caoimhe Rice mirrored this by pulling off an excellent save for her team but a super point from Sinead Hanamy kept St Rynagh's in the game.  This positivity was thawrted however when St Cillian's scored a super goal with Roisin Pinches finding the net.

Kilcormac/Killoughey too strong for Birr in Minor A Final

St Rynagh's were not lying down and replied immediately with points from Katie O’Connell, Amy Sullivan  and  Sinead Hanamy who hit over from a free after she was taken down on the 45 yard line to leave the half time score showing St Cillian's 1-5 St Rynagh's 0-6.

St Cillan's would have been the happier at half time although they may have been disappointed with the number of frees given away in the half.

After the break if was St Cillian's that opened the scoring with points from Sinead Hoctor and Niamh Costello pointing from a free.  The St Rynagh's girls continued to fight hard and it made for a tough physical contest between these two familiar rivals, but it was St Cillian's who kept the scoreboard ticking over with points Niamh Costello and Sarah Freeman showing lovely skill and hitting over before adding another from a free to leave St Cillian's leading by 11 points at the second half water break.

Into the final quarter and St Rynagh's continued to show their fighting spirit with substitute Cait Hickey down in front of the goal when she was sure to score.  But her team mate, Amy Sullivan hit the resulting penalty expertly into the corner of the net before adding to this with a free shortly after.  St Rynagh’s tails were up now and with momentum with them Aoife O’Regan hit home a super and suddenly St Cillian's lead had dwindled to just four points.

St Rynaghs can count themselves unlucky after this when they then hit the post fro a free and then hitting wide narrowly in the space of five minutes.

St Rynagh's may have counted themselves unlucky to be caught out with confusion on new rules which resulted in a free being turned over to a throw in that resulted in a goal for St Cillian's and they then added to this with two placed balls from Niamh Costello and this was to be the end of the scoring in the game.

St Cillan's were the hungrier team and this showed in the delight at the final whistle.  Player of the match went to the young Caoimhe Donovan who was outstanding for St Cillian's.  She was not alone in performance as Kacey Larkin also performed brilliantly and giving a master class playing corner back.  St Cillan's work as a teamwork and sharpness proved to be key in winning this title.

St Rynagh's, however, will have lots to learn from this match.  Their resilience and never say die attitude has to be applauded and the quality coming in from the sideline shows a team with depth.