Kilcormac/Killoughey too strong for Birr in Minor A Final 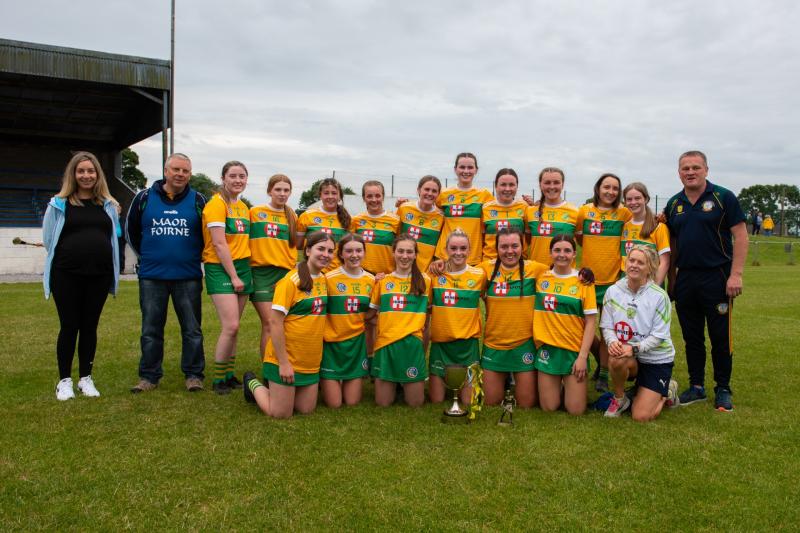 It is now almost common in the county to see clubs getting to play the outstanding 2020 finals and this was the case when Kilcormac/Killoughey and Birr met to contest the Minor A Camogie Final.

This was expected to be a tight and competitive affair and it didn't disappoint with both teams having their moments and providing a very entertaining game of camogie.  The days leading up to the final had been warm and sunny but on Friday evening it was overcast but dry.  There was a breeze blowing however this blew directly across the pitch so neither team had an advantage.

John McDonnell, from Ballyfore who had taken charge of the senior final was also given the nod for this match and when he got the match underway. Birr quickly took the opening score just a minute into the game with a great effort from Aoibhe Carey.  This was followed by a pointed free by Ellen Regan on six minutes to leave Birr leading by two points. It was a scrappy enough affair during this time with both teams trying to settle into the game.

It took Kilcormac/Killoughey eight minutes to get off the mark with a pointed free from their industrious and hard-working captain Jane Lowry.  Their defence was now holding firm with the likes of Steph Mahon showing great determination and aerial ability when under severe pressure.  Lowry added two more points before the water break to leave her team leading by the minimum as the teams broke for a drink and quick chat with their management teams..

The second quarter proved to be the decisive one of the game with Kilcormac/Killoughey's Emma Mulrooney grabbing her first goal of the match immediately after the restart. Cayla Fletcher made a great catch around the middle of the field and sent in a long ball to Mulrooney where she gained possession, took on her player and despite being thwarted at her first attempt, finished the rebound to the back of the net. Substitute Caoimhe Quinn followed this up almost immediately with a point and all of a sudden, K/K had all the momentum on their side.

Mulrooney didn't have to wait long before she netted again, thanks to great work out the field by Lauren Leonard and Orla Kilmartin. Mulrooney added one more point before half time to leave the score 2-5 to 0-2 in favour of her team.

To Birr's credit, despite being in arrears by quite a noticeable margin, they didn't lie down and they threw everything they had at their opponents in the third quarter with Ellen Regan looking dangerous after her move from centre forward to the edge of the square.  However, it was Mulrooney who opened the second half scoring with a point from play before Regan converted a '45 as a result of a super save from Kilcormac/Killoughey goalkeeper Eimear Rigney.

Seven minutes into the second half Cayla Fletcher found Mulrooney again and using her pace and power, she struck for her third goal of the day. Jane Lowry followed up with a point from play straight after this and one would have thought that there was no way back for Birr at that stage but anything can happen in camogie, especially in a final and Birr finished the third quarter very strongly.

A long range free from Ellen Regan for Birr dropped into the square.  It bounced favourably for her and ended up in the roof of the Kilcormac/Killoughey net.  She followed this up with a very good point from play and Birr found themselves gaining momentum and started to apply more pressure on the Kilcormac/Killoughey rearguard.  With the swing in momentum, Birr won another free around the middle of the field before the second half water break and again Regan was on hand to finish the ball to the back of the net when it dropped in around the square. Jane Lowry pointed from a free just before the second half water break to settle any Kilcormac/Killoughey nerves to leave the score showing 3-8 to 2-4 and with it all to play for in the closing quarter.

After the resumption, Ellen Regan pointed from play to leave just six points between the teams with almost fifteen minutes remaining.  However, this would be the last time Birr would score as Kilcormac/Killoughey dug in and from one to fifteen, they stood up and time and again showed the hunger and desire to come away with the ball.

Lowry added two points from frees before Mulrooney added another from play.  With 57 minutes showing on the clock, Orla Kilmartin got one of the scores of the game when she showed tremendous skill to control the ball first time, turn her player and from an acute angle on the sideline, strike the ball sweetly over the bar.  That was to be the final score of the game before John McDonnell blew the full time and the Kilcormac/Killoughey girls ran to celebrate while the Birr girls were left to ponder what might have been.

Afterwards, Chairperson of Offaly Camogie awarded Player of the Match to Emma Mulrooney before handing over the cup to Kilcormac/Killoughey captain, Jane Lowry.