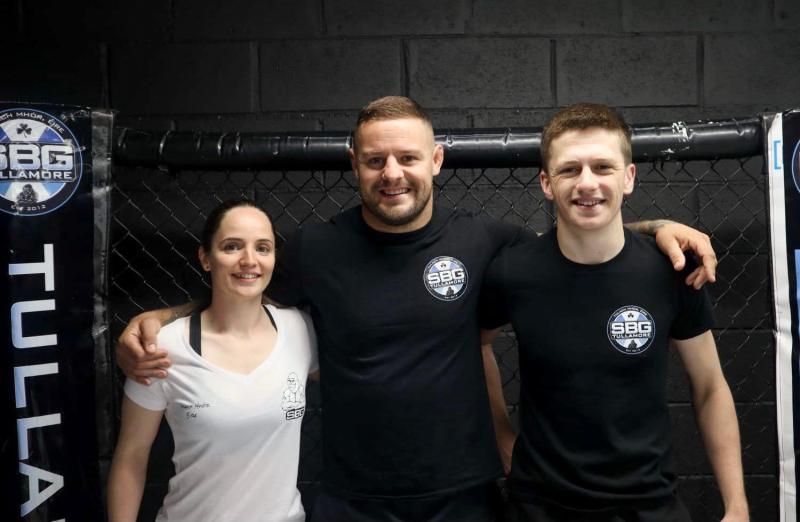 TWO adult members of SBG Tullamore, Ronan Deegan (21), from Tullamore and Lynn Johnson (28), from Clara, qualified for Team Ireland who will advance to the Mixed Martial Arts World Cup in Prague in September.

Both Lynn and Ronan have travelled to Belfast and Cork over the past few weeks to compete for a place on the Irish team and yesterday their efforts became a reality when they were both offered spots.

Ronan and Lynn join Bernie Ward and Jordan Scully as the first four people from Offaly to have achieved this honour.
The MMA IMMAF World Cup takes place in Prague in September.

Lynn started training BJJ and MMA three and a half years ago.

“I had my first taste of fighting in a cage when I completed the W2W programme at SBG Tullamore. The opportunity to represent my country and help make the sport more recognised is an honour and a privilege,” she outlined.

Ronan is a full time college student who trains MMA full time. “I work a part time job on the weekends and come from a large family of nine children,” he revealed.

Added Ronan: “MMA is something I began over three and a half years ago and it has changed my life completely, it has given me a sense of structure and goals to work towards. It has helped me physically and mentally grow as a person. My goal is to represent my country and also pursue a career in MMA as a professional fighter.”

“We are very excited and proud of the stream of young people and adults who are achieving great things in sport and MMA. They are representing not only their country but their community, family, county and gym to the highest level and we are very proud of them,” said Kieran.