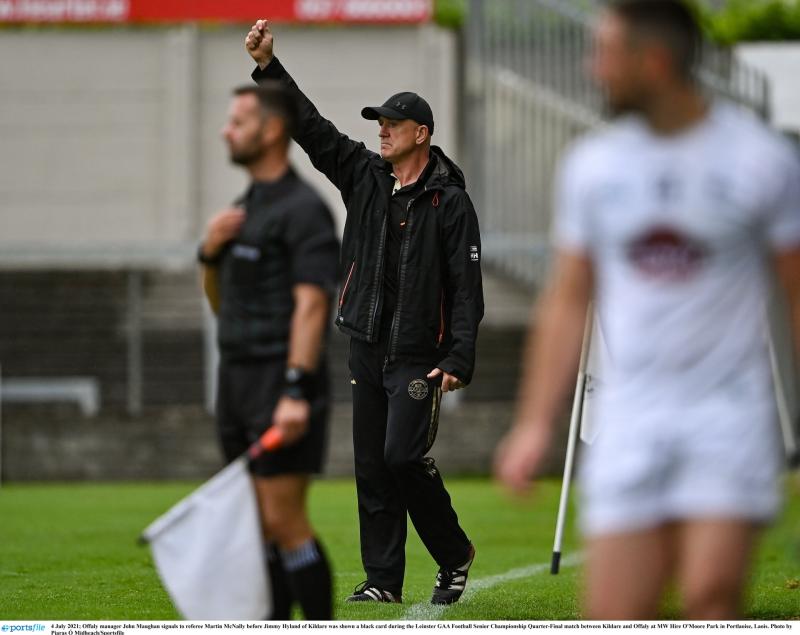 OFFALY captain Niall Darby believes it is crucial that manager John Maughan and his backroom team commit to another season in charge.

Offaly's season came to an end on Sunday with a 1-15 to 0-13 Leinster Senior Football Championship defeat by Kildare but with promotion achieved to Division 2 of the National Football League next season, Darby hopes the Mayo man will stay for a fourth season.

Maughan has often spoke about the toll of travelling to Offaly a few times a week from his Castlebar home but Darby said: “I would love if all the management team stays on. They have put in three great years of work there. I am really proud to say they are associated with Offaly. They have put in great work and they can't leave on this note. They have to give us a start in Division 2 and please God they will all be back, and players as well. “

Speaking minutes after the Kildare defeat, Darby is also optimistic that his Rhode colleague Niall McNamee will also give it another year.

“Niall will hopefully stay on as well. We will lick our wounds for a week or two and the hunger will come back next year. When the time comes to get back together as a group, we will go at it again. It is really exciting to have Division 2 to look forward to.”

He was disappointed at Offaly's defeat but admitted that the better side won.

“They just kind of kept us at arm's length there the whole time, unfortunately. We were a point down after the first water break and we couldn't get ahead at any stage. They are gone up to Division 1 and that is the minimum standard of teams we are going to be playing next year. It is very tough and we are going to have to learn to be able to cope with teams like that.”

He agreed that it wouldn't have took a lot for Offaly to have won.

“No and we had loads of chances. We just found it hard to convert some of them. They are clinical and they showed they have competed at that higher level than us on a consistent basis. Thy were able to take chances that bit handier but I am really proud of the lads today. Unfortunately we came up short in the end. It is becoming a bad habit.”

Anton Sullivan and Eoin Carroll had good goal chances for Offaly, one in each half and Darby felt one of those would have made a big difference.

The defender stated that it has been a good year for Offaly, despite the defeat.

“It has indeed. 100% I would have taken a promotion this year. People might say the way the groups were laid out made it a bit easier which it was probably but we will take what we were given. We are really happy to get up. We will compete in Division 2 next year and they will be really tough games. Playing against that standard on a consistent basis will only improve us I think.

He hopes that next year will be a more normal one.

“It was a strange year between no crowds and all the sanctions in place but they had to be in place so we could play these games. We are delighted we could get them played. We played seven games this year which was great. I really proud to be involved with everyone and I am looking forward to next year already.”

John Maughan admitted that Offaly lost the game in the first half when they missed to many chances. “It went wrong for us in that first half. We’d a lot of possession, maybe only 33 per cent conversion, And that’s the difference, not taking the chances, too long scoreless when we were in possession. That’s were we lost the game. It wasn’t that we weren’t good enough, we just weren’t ruthless enough.

“I’d say the last three years, it would have been a giant leap forward to take a scalp like Kildare, and we’re getting closer, we’re getting competitive, and things are looking up for Offaly football.

“We tried, but just didn’t capitalise through the entire 75 minutes of football. We had buckets of chances, and we had them spooked, no question about it. We felt coming here we were certainly good enough to beat Kildare, no question of that. There was a great air of confidence in the team, and that was our eighth game in nine weeks, including a challenge, so there was maybe a little bit a fatigue creeping in there down the homestretch, but they were brave.”

Maughan stated that he was very proud of his side. “I am proud of the effort they gave. They have a real exemplary attitude and their approach is top class. They have no egos and are full of passion and pride. I would have loved to have taken a big scalp today. It has been a good season and it could have been better.

“We were very close to a big scalp. We spooked them but we didn't execute our chances. We had great goal chances and it is our third year in a row to miss a great opportunity, Kildare last year and Meath the year before. We had them by the throat but we didn't squeeze hard enough. I felt there was a vulnerability in Kildare and there was something different about the Offaly team. We gave our heart and soul but we have to accept it was not good enough.”