Fennelly delighted with Offaly progress as Down manager salutes improvement 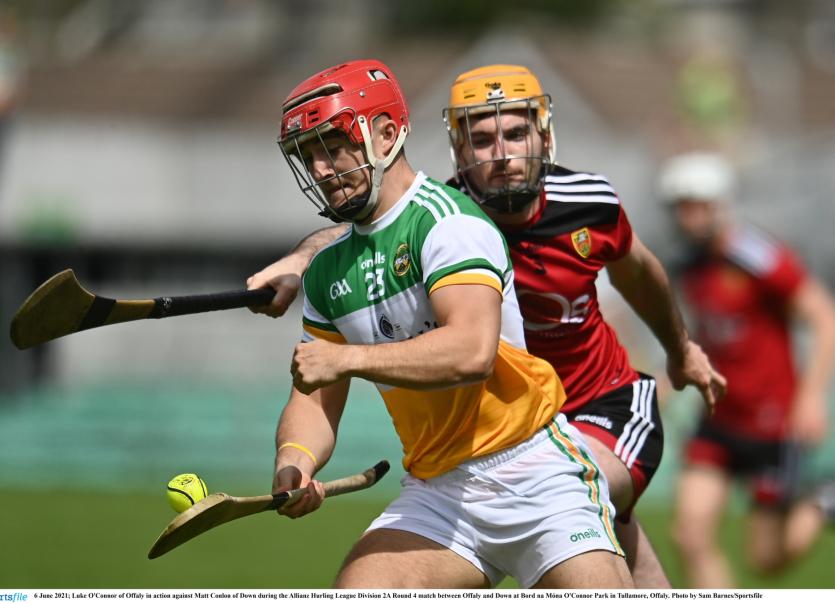 SUMMER hurling plus playing together more as a team may be the big factors in Offaly's improvement this year, according to manager Michael Fennelly.

The Kilkenny man acknowledged that significant progress is being made this year. Speaking after a fourth facile win, this time over Down, secured promotion from Division 2A of the National Hurling League last Sunday, Fennelly insisted that team management have not done a whole lot different between last year and this year.

Yet huge strides have been taken in a few months – Sunday's 5-25 to 1-19 win was on a different planet compared to the Christy Ring Cup semi-final defeat on penalties against Down in Newry last November.

Fennelly was asked about the turnaround.

“It is actually less than a year and off seven weeks training, technically. And on top of that, you had four games. It is very hard to be doing all this training individually. The boys are on their own and you can't get together and work on them but they have worked really well since they came back. They have had a really good four or five weeks in a row there and they are showing their true worth. They are showing what they can do and I am delighted for them.

“As a team and a unit, the 26 are very close and very strong. They are demanding things off one another. They are the ones that are hungry and want to play for Offaly and get silverware back for Offaly.”

When it was stated that the improvement looks significant, he replied:

“What is the answer to that? We are summer hurling now. The Kilkenny's, Offaly's, we all like our summer hurling. The ball travels faster, the ground is harder. We have a lot of younger players in now. They have campaigned under Gary Cahill (Offaly U-20 manager) for the last couple of years and they are good hurlers.

“There are hurlers in Offaly and they are very ambitious. They are mad to play. The hardest thing I had to do on Friday was to pick this fifteen and 26. It was very very hard. We had a few injuries on top of that and a few lads were very disappointed. We had to have those conversations, you might get a run or you might get to play the next day. That is important. As a group, they are really tight. They are driven.”

Fennelly agreed that Division 1 hurling next season is important for Offaly.

“It is a bit away. It is where Offaly needs to get. We need games like that to bring on these boys. They haven't any experience of that pace. You look at Westmeath up there, they are in a very tough group to be fair. Antrim had a good draw against Wexford. It is super, they are going the right way.

“We have Wicklow next week which is going to be important again. Hopefully we will see more players in that and see their worth because it is 50/50 between a lot of players.

“We had an awful headache during the week picking this team. It is very much on form and who is going well in training. Sometimes it is a flip of a coin between one or another because there is very little between them. When you have that competition witin the group, maybe you have something.”

How much emphasis did you put on the league?

“For me it was championship and that is the way we looked on it. We said this is what we have, five games in the league and we could have three games in the Christy Ring Cup. That is eight games. Genuinely we haven't changed a whole lot from last year to this year. Our principles are still the same. Work rate. The youth side of things helps, there is a lot of energy and people are ambitious.

“A lot of lads were carrying injuries last year and it was hard to get a run. The whole year was split last year and then there were lads coming back tired to us in September and October in the rain and the wet so there are a lot of different characteristics between last year and this year but our set up hasn't changed a whole lot. I know it might look that way but we haven't. Maybe this group are playing for each other, maybe they are selfless. That could be a large part of it. You have to want it and they are very selfless. They will pass the ball to the man in the right position. Maybe last year, that wasn't happening, to be honest about it.”

Down manager Ronan Sheehan was wholesome in his praise of Offaly, stating that they have improved very significantly.

“We are disappointed about the nature of the performance more so than the result. We knew we were coming down for a very difficult game. Offaly have been going very well so far. We conceded a goal straight from the throw in. It was what we didn't want to do and we had talked about it. That happens sometimes but we played a lot better in the second half. The game was probably over at half time.

“Offaly's movement was very good. They are a lot sharper this year than they were last year. I know you could argue that last year we played in November but their hurling was sharper as well. It wasn't just down to weather conditions. Offaly has improved significantly. I think Down have improved too but the rate of their improvement is a lot better. “

“We are disappointed but if you had said to me at the start of the year that we would have been safe with two games to go, I would have took your arm off and headed for the hills. I think the disappointment was we came down here looking to get a performance but I don't think we played as well as we could. We will now regroup for the McDonagh Cup. That is where our focus turns but full credit to Michael (Fennelly) and Offaly. Well deserved victors and not just today but in all our matches so far.

“I think it is great to see them back in Division 1. Antrim showed that teams coming up can compete and I think hurling is general needs counties like Antrim, like Offaly in Division 1. There is a challenge there for Croke Park to make sure that the resources are directed to those counties, and there are scarce resources there now.”