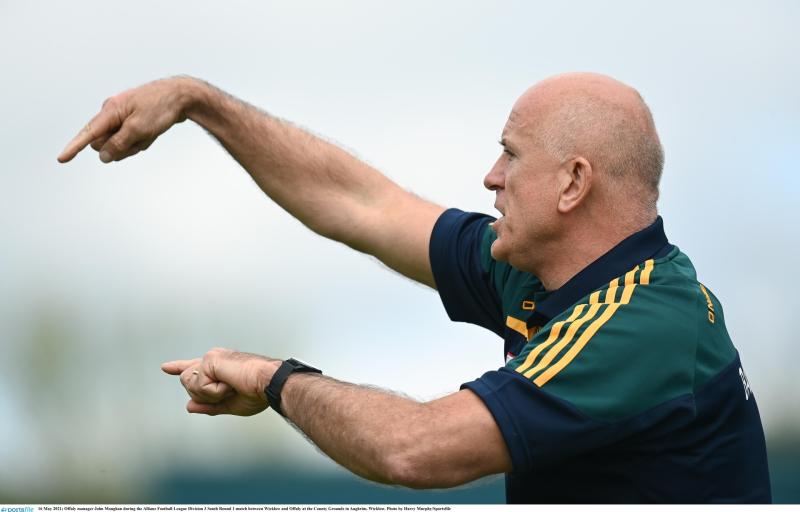 JOHN Maughan did not try and disguise his upbeat mood after watching Offaly move into the National Football League Division 3 semi-finals with a convincing 1-17 to 1-12 win over Tipperary in Tullamore on Saturday.

“I turned around to one of the lads behind me up to the first water break and he said that was the best football he had seen from an Offaly team in 10 or 12 years. It was sparkling. Right around the park, everyone was on top of their game, winning their individual battles.

“After the water break, we fell away a little bit. They pushed up on our kick outs and we struggled to win primary possession, that was a cause of concern. We went in a point down at half time and it was a horrible place to be having played so well for the first 20 minutes. We addressed it, we got to grips with it and again our bench, our subs made a huge contribiution as they have done in the three games. I am very very happy,” he said.

After beating Wicklow and Limerick in their first two games, Maughan expected a step up from Tipperary.

“And it was. They are a formidable choice. They are missing a couple of their first choice players, nonetheless they have that confidence from winning a Munster title. We knew it would be a formidable battle but we viewed the videos in detail and we felt we were always capable of beating them.”

Injuries to defenders Declan Hogan and Johnny Moloney saw Offaly make changes from the previous two years – Carl Stewart started at centre half back, David Dempsey returned to defence and Cathal Mangan and Cian Farrell came into the team.

“Carl Stewart came in there and Cathal Mangan came back today. Cathal had a back spasm for ten days there and he probably needs a bit more game time but it is great to see Carl Stewart come in and sitting in comfortably to that role. He did exceptionally well. We lost two formidable players in Declan Hogan and Johnny Moloney, two stalwarts for Offaly for the last number of years. It is great to be able to look over your shoulders and see quality and we have depth in our squad. Bill Carroll came in there, absolutely fantastic but we have more young lads coming. There is a bunch of them and one or two who didn't tog today who will definitely play for Offaly in the future. I am thinking of the likes of Cathal Donoghue and a couple more lads.”

He spoke about the morale in the camp and how Offaly enjoy playing football at this time of year.

“There is a great bit of momentum, a great vibe and morale. There is great spirit at training and when you have that, you have an awful lot of positive things happening.

“We are a summer football team. This team hasn't really performed in the muck and rain and I am thinking of above against Louth on a couple of occasions and games we have left behind in the past. We have a lot of pace in our team and we have a lot of quality. When you get conditions like we got today, those guys will perform. We all said that. They wanted fine conditions, O'Connor Park was just majestic. I wish I was 25 again to get out there today. There is depth coming into their squad. There is young fellows putting up their hand and saying they want to play for Offaly. I am proud of that. That is what we wanted.

“We can’t guarantee All Ireland titles or Leinster success but we want a proud Offaly playing football and giving supporters, who unfortunately can't be here, something to be proud of. I know since my days back in Moate in the seventies how proud Offaly people are and I am just privileged to be here, giving a small bit of assistance in whatever way I can.

“They are working extremely hard because they want to win. The desire, passion and determination are there. You can;'t beat that. I remember a comment from Darragh OI'Se years ago that when he wasn't playing well, he never stopped working and we have that. They put in a big shift and hard tackles.”

Now Offaly face into a semi-final against Fermanagh. On Monday, they were given the benefit of a home draw and the Mayo man remarked:

“Fermanagh will be a formidable opponent but I always feel that if the Offaly team can perform and deliver on the quality that they have, I wouldn’t fear playing anyone. There is a lot of quality in that team and guys are now looking over their shoulders here to get a jersey. When you have that element of competition around, guys will work their socks off. We will have a great opportunity. Fermanagh will be formidable and they have a lot of talent. On their day, they will be difficult to beat but when you are in a game of that nature, you always have a chance. “

While he has regularly mentioned the toll of travelling to Offaly from Castlebar, Maughan confirmed his commitment to Offaly.

“I never thought otherwise. I made a commitment to be here and I enjoyed it. There were times when it was ugly and we weren't winning games and hanging on. I remember winning by a point in Sligo to retain our Division 3 status, we have done that. We have a great opportunity now. We knew if we persevered and stuck at it, the quality was here and they are beginning to bubble to the surface now. It is hugely encouraging to see our underage teams in football and hurling winning and our camogie and ladies football teams doing well. There is a lot of good things happening and long may it continue.”