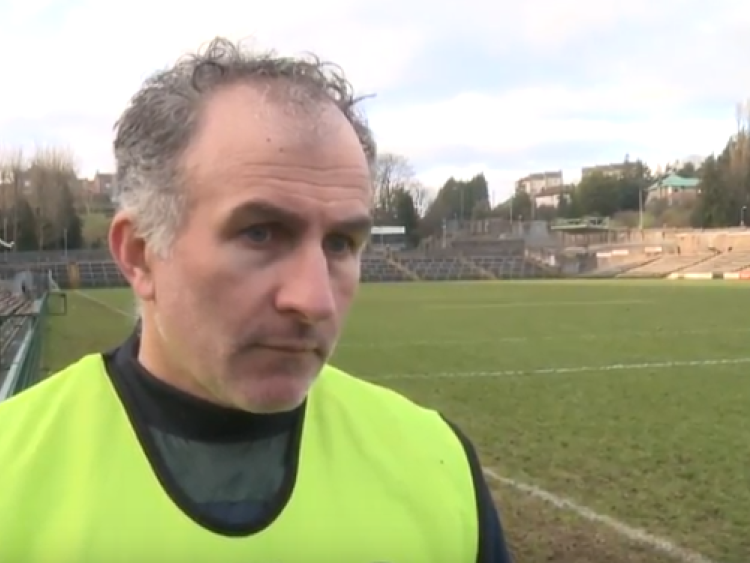 Steven Wallace has questioned why he was sacked, accused the County Board Chairman of lying and claims there was 'a witch-hunt' against him

The war of words between now former Offaly Senior Football manager Stephen Wallace and Offaly County Board continues this evening with the Kerry man questioning why he was sacked when he was, accusing the County Board Chairman of not telling the truth in interviews today and also accusing some elements within the county of mounting 'a witch-hunt' against him.

In a lengthy interview with the Offaly Express today, he also rubbished claims that he had lost the dressing room and described assertions that up to eleven players were set to leave the panel as 'utter rubbish'.

Speaking to the Offaly Express, he was adamant that Offaly County Board Chairman Tommy Byrne's assertion on various media outlets today that he only found out on Sunday about Stephen Wallace's lost appeal against an eight-week suspension in the wake of an incident in Kerry was 'untrue'.

“The County Board Chairman said on a national radio station today that he didn't hear that my appeal wasn't successful until Sunday. I can categorically tell you now that that is untrue. When I came out of my appeal in the Munster Council Offices on Friday, as soon as the Chairman of that committee contacted me to tell me that my appeal had not been successful [on Friday evening], the first person that I contacted was the Chairman of the Offaly County Board, Mr Tommy Byrne and I have the text messages and the reply on my phone to prove it. I did the same when I got notification from the Kerry Appeals Committee on May 4. As soon as I got notice from them, that they were upholding the decision of the CCC and I was going to be suspended, I immediately contacted the Chairman of the Offaly County Board and made him aware that I was serving an eight-week suspension. He was fully aware I was suspended for the last two weeks. Why wasn't it a problem for the last two weeks? He's saying that while it was under appeal I wasn't suspended. I was suspended and he was fully briefed that I was serving a suspension. You tell me who is right and who is wrong in all this?”

MORE TO READ: Offaly County Board Chairman says Stephen Wallace's suspension was the reason for his sacking

He also questioned Tommy Byrne's assertion that the sacking was due to the suspension:

“The reason that I have been removed from my position, according to the County Board,” he stated, “is because I am under suspension and therefore can't do my job. I'm under suspension since early May and the County Board are fully aware of this. If they had relieved me of my position then because they believed I couldn't do my job and prepare the team, I could see the logical thought process behind that. Why now, in the aftermath of losing a football game, is my suspension a problem? Their reason lacks logic and rational thought. This isn't the first time this has happened with this Executive and it probably won't be the last time.”

Wallace pointed out that his suspension had already been in place for four and a half weeks and that he would miss just one more game.

'There was no logical process to their decision'

He continued, “this is a process that they wanted me to oversee for three years. Say I had gotten sick in the middle of the National League and wasn't able to be on the sideline for two games, would they sack me as well? There was no logical process to their decision. I made them aware that the Hearings Committee upheld the CCC suspension and at that stage we were four weeks into the process. Why didn't they terminate me then?”

He also lashed out strongly at the lack of support he received in recent days while what he describes as a 'hatchet job' was being done on him by some in the media.

When asked if the claims of some in the county that the players had lost faith in him, Stephen Wallace gave a unequivocal response.

“Absolutely untrue. There were 25 players on the pitch last night, there were two or three lads excused for work commitments, exams and one was going to Ed Sheeran with his girlfriend. I can walk away with my head high knowing the players were not the problem here”

The only absentee was Nigel Dunne but Stephen Wallace said he had no doubt that the Shamrocks man would have returned to training this weekend.

“He's hurting, he needs time. He's spoken to the senior players. I've been in touch with Nigel. There's no fall out here. Nigel Dunne, if you are asking for my opinion, would have been back on the training field this weekend. Everyone will welcome him back with open arms. There's no issue.”

Sean Doyle is the only player who has left the panel but Stephen Wallace explained that it was 'amicable' and that the player felt he wasn't getting enough minutes on the field and he wanted to go back to his club to try and regain his form.

He described claims that up to eleven players were set to leave the panel as 'utter rubbish'.

'I would consider myself and Johnny to be on good terms'

He also addressed the matter of Johnny Moloney not being on the panel. Stephen Wallace confirmed that there had been a 'falling out' between Johnny Moloney and Billy Sheehan after the Fermanagh game in the Allianz League but he stressed that they had sat down, 'mediated it' and agreed to move on.

“I had no falling out with Johnny. He decided he wasn't in the right head space for it and that he wanted to go back and play with Tullamore. I told him that was absolutely fine and that my phone was on whenever he wanted to come in. He then had a day or two to think about it and he phoned me and he said he'd had thought about it and decided not to rejoin the panel this year but he said he would be back in in October for next year if I'd have him and I said of course I'd have him. He's probably the first lad that committed for next year."

Wallace continued, “people reckon I had a big bust up with Johnny Moloney. I would consider myself and Johnny to be on good terms. It's a crazy portrayal that's gone out there as well. It's one of these crazy things. It's a stupid thing to throw on top of what happened on Sunday and it has no relevance. Myself and Johnny never even had raised voices at any stage. I actually thought I had him coaxed back at one stage.”

He also addressed the harsh criticism he has received this week, particularly from Midlands 103 commentator Brian Gavin who has also featured on the national airwaves through much of this week.

“I have absolutely no idea why that happened. I don't know Brian Gavin. I gave him an interview after one of the games but I have never spoken to him socially. I know nothing about the man. I don't know why he has gone on this crusade. Only Brian Gavin knows that. I do not know why this witch-hunt materialised but I really feel sorry for the players in this debacle. I don't know if he is on a personal crusade for himself or if he is simply the voice of a witch-hunt behind the scenes. The one thing I will say is that Brian Gavin has got too much time already and I don't want to talk about Brian Gavin to be honest.”

He expressed his belief that the panel is in transition and that there were improving.

“The panel is in transition at the minute with a lot of new guys in there and playing National League and Championship for the first time. And it has been improving. We were the first Offaly team to beat Westmeath in 12 years. We went down to Wexford in a relegation fight and beat them. Armagh annihilated Offaly by 30 points last year but we kept them to five points and they will probably be in the Super 8s. And now they (County Board) are after throwing the whole project under the bus. I wish I knew why but it's very hard to take.

“I put my heart and soul into this travelling up and down from Kerry three and four times a week. My backroom team have worked diligently. The players are on record as saying it's the best onfield process they have had ever within an Offaly set up. Things were going well. We unearthed some fantastic new young footballers. We were building on it and we lost a football game and the whole thing went bananas. And worse, they are being totally disrespectful to the Wicklow football team and John Evans. We lost a football game to Wicklow, a county with a proud tradition, with a real strong club foothold, with the likes of Rathnew who turned over St Vincent's in the Leinster Club Championship. We've no God given right to beat Wicklow. We were missing Peter Cunningham and Eoin Carroll and they will be back the next day. Sean Pender was only patched up on Sunday. I guarnatee you Offaly will be a very different proposition by the end of this month. I had great days in my seven months with Offaly and I walk out of there with my head high.”