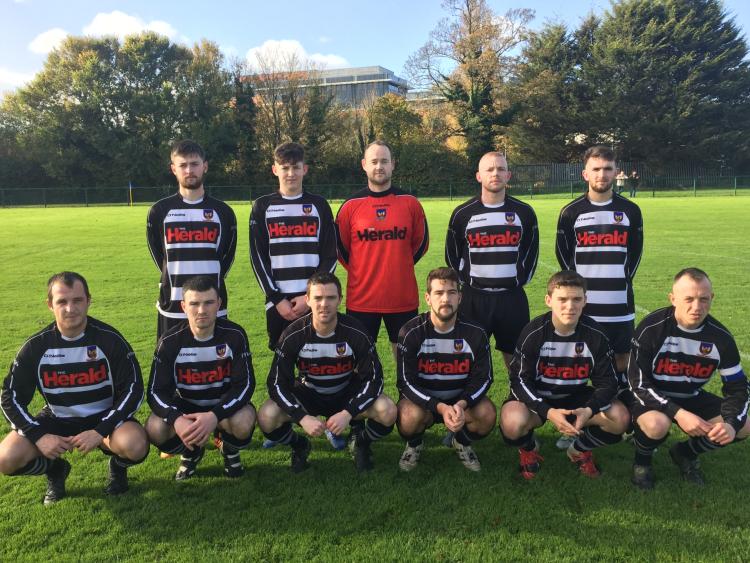 Tullamore’s great start to the season shows no sign of derailing as they moved into joint top spot in the league table along with Liffey Wanderers following this fine away win against a very good UCD side.

The early stages were evenly contested as both teams knocked the ball around to good effect. The visitors were first to threaten with Robert Bracken gaining possession on the edge of the area and curling his shot narrowly wide and then Brian Francis had his twenty yard effort well saved by Gavin Sheridan in the home goal.

As UCD came more into the game Conor Cannon began to cause problems down the left and with 20 minutes on the clock he got to the bye-line and pulled the ball back for Gareth Coughlan, but he drilled his shot inches wide.

Five minutes later Tullamore made the breakthrough when Brian Francis won possession on the half-way line and went on a great run that carried him past three defenders before squaring the ball for Robert Bracken to fire home from close range. The students tried to get back in the game but the Town defence stood firm as the interval arrived with Bracken’s goal separating the two teams.

On the resumption Tullamore went back on the attack with Shane Dolan bringing a fine save from Gavin Sheridan and then Dolan played a lovely ball through to Brian Francis, but the UCD keeper brilliantly turned his effort around the post. The home side regrouped and began to wrest back control of the game and they nearly levelled when Conor Cannon’s cross-shot hit the outside of the post.

Central defender Stuart Carroll was outstanding as he continually shored up cracks in the Tullamore defence as the home side went in search of an equaliser and it nearly arrived on 75 minutes. The ball broke back to Gareth Coughlan 6 yards out and his goal-bound effort looked destined for the net but Alan O’Connell, at full stretch, produced a stunning save to keep his side in front.

The home side continued to press as Tullamore had to defend a succession of corners but their back four refused to give an inch as time and again they thwarted the students best efforts. A wonderful passage of play by Stephen Francis when he received the ball while surrounded by three UCD players epitomised his quality.

Instead of hacking it to safety he retained possession for a good 30 seconds before playing a great ball through to Anthony Kavanagh, buying his team valuable game time in the process. The final whistle was greeted with a combination of joy and relief by the players, management and travelling support as they held out for a priceless three points.

They are away to Glenville FC this Sunday when they will be hoping to consolidate their position at the top of the league table. In what was a great battling performance there were excellent contributions from Alan O’Connell, Stephen Francis and Kevin Williamson, but the man of the match award went to Tullamore’s towering central defender, Stuart Carroll.