ANALYSIS: Offaly cut down errors to beat Kildare in second half 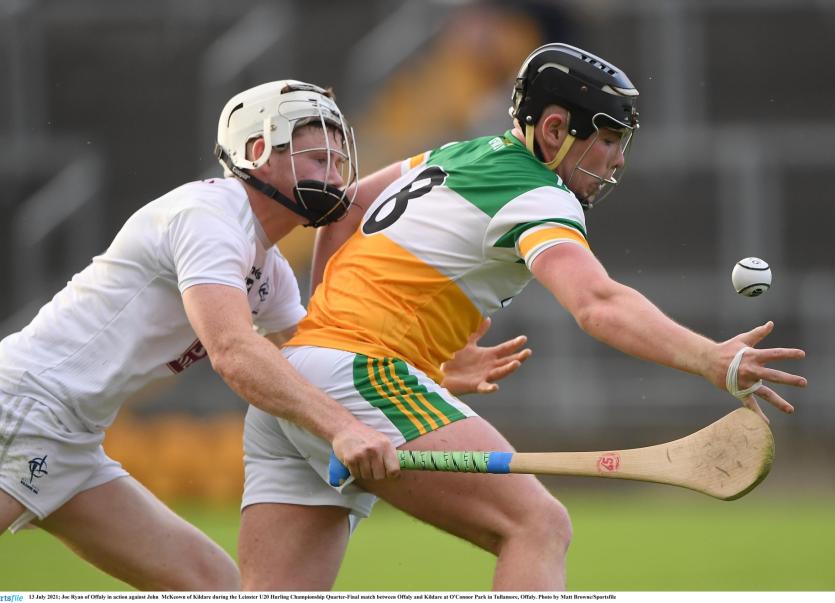 Offaly were much sharper and intense all over the field and most importantly, they cut down on the errors. Superb free taking from Liam Dempsey was responsible for Kildare being level at half time. He got nine frees, many from a long way out and on the wing as Offaly fouled way too much, even if some of them were questionable. Many of the frees conceded were clumsy and unnecessary and Dempsey gleefully punished everything.

Kildare had stunned Wexford a week earlier and that had Offaly on high alert for this. They will be absolutely delighted with the win and a semi-final next Tuesday against Dublin in Parnell Park. While Offaly's hurling was quite mediocre for much of the first half, they were in a good position at the break as they had much greater scope for improvement.

Once they stopped fouling, the Offaly defence were very good and they kept Kildare at arm's length. Padraic Watkins had a couple of wayward clearances when he tried to pick out a man but was immense in general, especially when Kildare were competitive while Peter Cleary, Luke Egan and Killian Sampson all impressed.

Cian Burke did plenty of good things at midfield and carried the ball well while Jack Screeney, DJ McLoughlin and Charlie Mitchell were in great form in the attack. Screeney was brilliant, hitting 12 points, 11 from play and growing in stature and influence in general play as it wore on. Loughlin was at his best as he scored 1-3 while Mitchell looks to be a real prospect. Full of running and pace, he got four points, a couple of them truly delightful. Tom Dooley also impressed while Luke Carey enhanced that sector when he came on.

The sides were level at 0-11 each at half time and Offaly were happy to be in that position as Kildare had been ever so slightly the better team in the first half. It was very even in most sectors and Kildare had missed a few chances that would have given them the lead while Offaly converted almost everything and had just one wide.

Charlie Mitchell (Offaly): A member of the Offaly minor hurling team last year, Charlie Mitchell brightened up the evening with spells of real class. He started off very well as Offaly settled down quickly and turned in an excellent second half when Offaly upped the ante. He was skilful and his blistering pace caused a lot of problems for an under pressure Kildare defence. Four points from play was a very handsome return. His Kilcormac/Killoughey club mate Jack Screeney was a close contender.

Jack Screeney got a superb point from play in the eight minute of the second half. He was a long way up when he wound up to shoot and he had the distance and accuracy. It gave Offaly a 0-16 to 0-12 lead and had a big positive impact on Offaly's confidence while sowing seeds of doubt in Kildare.

Offaly were not happy with some of the frees that Caymon Flynn gave Kildare in the first half. A couple of them were definitely soft but having said that, Offaly's tackling was not great at times. In the second half, it was Offaly's turn to get a few soft ones and overall, they probably balanced out. Flynn got most calls right.

This game provided further evidence of the work being done at underage level in Offaly. It is important that they beat Kildare, Laois, Westmeath and Carlow every chance they get as they bid to bridge the gap to the top tier counties in Leinster.

O'Connor Park was in excellent condition and the 500 strong crowd enjoyed the game. Well done to Offaly head steward Jim Kelly who quickly reacted after a Kildare official moved into the area where the Offaly subs were and drew a reaction from the management with some of the comments he was making. The Ballycumber man was quick to get him to move back up to the Kildare zone in the stand.

Offaly play Dublin in Parnell Park next Tuesday in the semi-final.