Jack Foran scores late equaliser for the Offaly side 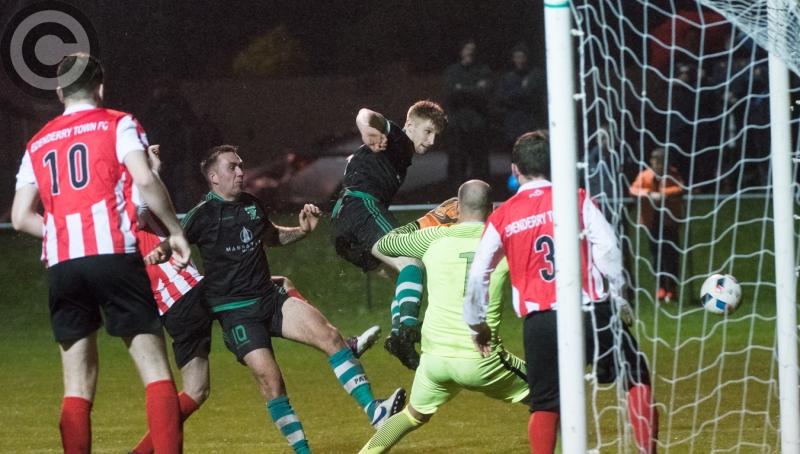 The home team were pegged back twice as Edenderry picked up a point away from home .

Portlaoise found the back of the net just four minutes in, but Jason Murphy was offside. Edenderry Town, who went into the game in third place in the league, had their first chance through Sean Moriarty. Portlaoise failed to clear their lines, and as a result Moriarty nicked the ball and forced Mateusz Cwienk to react promptly.

Portlaoise opened the scoring 21 minutes in when Jason Caffrey was tripped just outside the penalty area. Jason Murphy caught Eddie McDonald out in goals by going to the side of the keeper and leaving him flat-footed.

Edenderry Town nearly carved out an immediate response. Barry Clancy played a brilliantly accurate long ball into an unmarked James Rafferty, who took it down well, but was excellently blocked down by Eoghan White.

Murphy nearly produced a goal out of nothing at the start of the second half. He chased down what looked like a hopeless ball, managed to earn possession, beat his man, then attempted an audacious chip over Eddie McDonald, which went just over.

Edenderry Town equalised ten minutes into the half. Portlaoise were causing themselves all sorts of problems by not clearing their lines, and Liam Donnelly took advantage of this by giving himself a bit of space, and toe-poking it past Cwienk.

Edenderry Town, who brought along a large crowd of supporters, had all the momentum. Goal scorer Liam Donnelly played a one-two with Dean Commins, but his resulting shot was at a comfortable height for Cwienk.

Murphy almost grabbed his second when midfielder Colm Coss whipped a ball into the back post where Murphy was left unmarked, but he could only find the side netting.

However, then Portlaoise, who had found their bearings after the early setback, restored their lead. Murphy turned provider from another set piece delivery, and no Edenderry Town man could get near the colossal Colm Coss, as he found the net with his head.

Edenderry Town refused to give Portlaoise a breather though, and Jack Foran flicked on a header from a corner to ensure they would leave with a well-earned point that left them in fourth place in the table. They are five points off top spot but do have two games in hand.