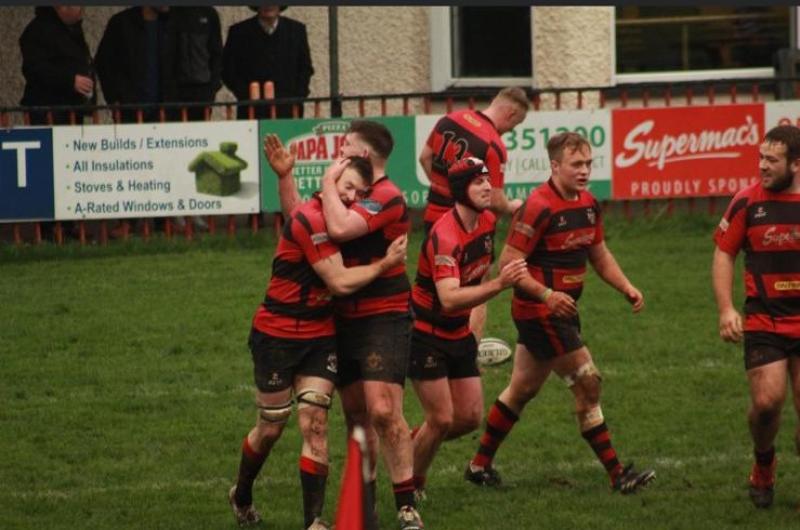 Tullamore recorded an emphatic win against a well fancied Bangor side at the weekend to nail down their valid aspirations for promotion this year. Bangor had won 5/5 leading up to this game and were sitting in second place. Tullamore had returned from Musgrave Park with a win and were keen to follow that up with another.

It was no secret that Bangor's scrum was their main focal point in attack, and they looked to exploit that early in the tie. The visitors won a penalty deep in the 22, instead of opting for the posts, they chose to crouch down to try and force another scrum penalty. Matt Murphy, Cathal Feighery and Mark Kennedy are no slouches in this department, and shoved the Bangor pack back a yard before realising that they had to play the ball. This was an early statement of intent from Tullamore, and the pack never took a backward step for the duration of the game.

Conor Dunne scored the opening penalty of the game, thumping the ball straight over the black spot from the halfway line for the opening score of the game. Dunne gave an exhibition from the tee, scoring from a range of angles and distances to record 6 from 6 attempts. Tullamore enjoyed a period of dominance for the majority of the first half. A wayward box kick was gathered by Karl Dunne on the halfway line. The full back spotted space on the far side of the field and carried the ball to the flank. As the last defender attempted to tackle Dunne, he released Sean McCabe who showed a clean pair of heels to storm over for the first try of the game. Dunne converted the score and added another penalty to leave the tie at 13-0 at the break.

Tullamore introduced Brian Geraghty, Gavan Ridgeway and Craig Strong to the fold at half time, and immediately saw the benefit when Leon Fox coolly slipped the ball to Geraghty after making great headway himself. Geraghty steamed through the gap and chucked the ball to Craig Strong who was tackled just before the line. Strong then popped the ball to Gavan Ridgeway who barrelled his way over for the second try of the game. Dunne duly converted and Tullamore found themselves dotting down their third within minutes.

The visitors restarted the game, and Sam Burns sent a box kick into the clouds, it was gathered by the Bangor out half who was immediately under pressure. Jonah O'Keefe got a stern hand on the attempted return kick which fell to Leon Fox. Fox exploded into action and ran the ball home from 40 yards out, evading 2 tacklers in the process for a brilliant individual effort. Tullamore weren't finished there and had the bonus point tied up with ten minutes to spare

. Liam Farrell made his debut on Saturday and certainly left his mark on the game. He claimed a wayward kick on his own ten metre line, and embarked on a Flatley-esque run, gliding and stepping around several defenders only to be scragged five metres from the line. Farrell showed great awareness to pop the ball to Gavan Ridgeway, who ran a fantastic support line to score his second try of the day. Bangor responded with tries late on in this period but the game was well and truly finished as a contest at this point.

This was a fantastic performance from the men in red and black, and the team as a whole performed brilliantly. Matthew Murphy, Conor Kelly,  Barry Bracken and Leon Fox all had outstanding games in the pack, while Burns, Geraghty, Farrell and the Dunne's all gave great accounts of themselves.

Offaly footballers and hurlers to compete at Christmas golf outing

Magnificent seven for Offaly at the dogs last week