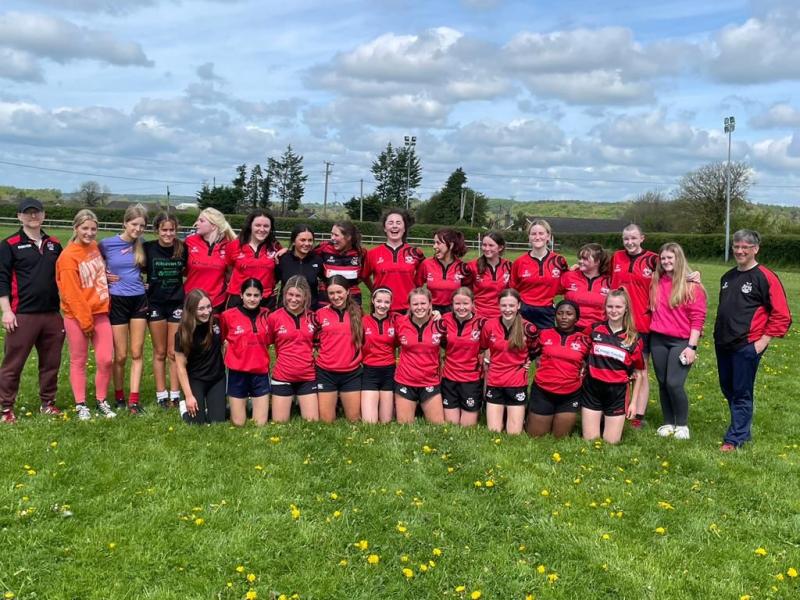 The victorious Tullamore U-16 girls rugby side.

Tullamore u16 girls toughed it out against a solid Mullingar team in their Midlands League final last weekend. Tullamore, normally slow starters took the lead early in the game with a try from Thobile Losa driving over the line. 5-0.

Tullamore pulled way further with a few phases from the forwards and a sniping run from Poppy Meyer getting over the line 10-0.

First scrums were 50/50 but then the front row of Ella Gilmartin, Julia Hooper and Thobile Losa applied pressure and gave Tullamore clean ball for attack and driving pick and goes from Saoirse Guinan along with hers and Sophia Moore powerful tackles stopping ball carries from the Mullingar forwards. Kaitlyn Buckley took off from where she left from the Leinster final tackling everything in front of her and adding to her game with clever runs. On the wing Hannah Ryle used her usual footwork to make ground where there was none.

Julia Hooper's darts continued to find the target with the safe hands of Jenny Dawson providing secure ball and on occasion challenging the oppositions ball.

Mullingar scored before half time and converted it with the momentum going back to them 10-7. Mullingar got a second try 10 minutes into the  2nd half and converted it putting them up 10-12 up. Then Mullingar began to rattle the Tullamore defence looking the more dominant team. However, Tullamore dug deep and with Arianna Marcu coming on, chasing down every ball put pressure back on Mullingar with a brilliant backs move through the hands for Aoife Hughes to score Tullamore’s 3rd try putting them up 15-12.

Then Mullingar , the dogged team they are, came back  stronger, stretching Tullamore’s defence and seemed to have more energy from getting back in the game which was leaning in their favour.

But Tullamore dug deep, defending to the last; stopping Mullingar’s advances, some of them close calls with last ditch tackles from Aoife Minnock,  Mila Brozdowska, Aoife Hughes and Danielle Foggerty after length of the pitch and strong back plays from Mullingar.

Mullingar kept piling on the pressure with a close scored game but in the last 2 minutes, with a drive from the Tullamore forwards and fast hands, the ball went out to Lauryn O’Reilly who sealed the deal with a match winning try in the corner.

The game was played with two evenly matched sides , but with the steely inspiration from captain Claire Burke, tackling everything and leading physically and directionally gave Tullamore a never say die attitude defending the game to the last with their forwards jackling for the ball and backs clever kicking turning over Mullingar advances.

Honourable mentions were Kayla Hannon coming on for Isobel Gibney who had being making go forward runs and solid defence through the game. Kayla came on with a tight score and continued this level of solid defence that kept Tullamore in the game.